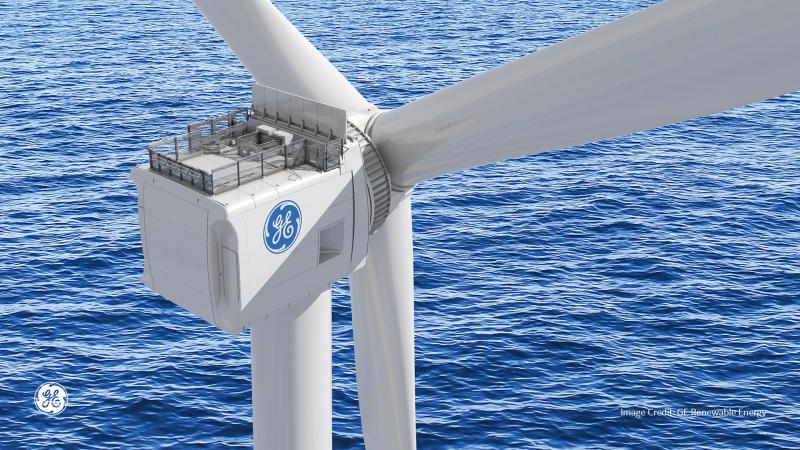 A prototype of the world’s largest announced wind turbine, GE Renewable Energy’s 12 megawatt (MW) Haliade-X, will be installed in Rotterdam during the middle of 2019 for five years of testing.

Announced in March 2018, GE Renewable Energy’s 12 MW Haliade-X will measure in at 260 meters in height and boast a 220-meter rotor, capable of generating enough clean electricity for 16,000 households all on its own.

However, before the turbine can see commercial operation it will first have to undergo significant testing so it can obtain the necessary Type Certificate, a key step in the company’s aims to commercialize the turbine in 2021. A Type Certificate simply verifies the design of a wind turbine and provides independent proof of performance and safety in accordance with existing international standards and systems. DNV GL, for example, is one provider of Type Certificates for wind turbines. Commercialization is expected within around a year of the turbine’s installation, but the company will continue to perform additional tests over the remainder of the five years.

An important step on the road to obtaining its Type Certificate for the Haliade-X was announced on Wednesday by GE Renewable Energy in partnership with Future Wind, a Joint Venture between Pondera Development and SIF Holding Netherlands, which will see the first Haliade-X 12 MW wind turbine prototype installed in Maasvlakte-Rotterdam, in the Netherlands, during the summer of 2019 (though no specific date has been set as of yet, according to a GE spokesperson).

Specifically, the Haliade-X will be installed onshore to facilitate access for testing and will provide GE Renewable Energy the necessary data to obtain the Type Certificate.

“As we rapidly progress on assembling the Haliade-X prototype, this announcement is a critical step forward for GE and our customers,” said John Lavelle, VP & CEO of Offshore Wind at GE Renewable Energy. “The port of Rotterdam has been a real partner and provides all the necessary conditions to test the Haliade-X in the most drastic weather conditions.”

Activities to prepare the site for installation of the turbine have just begun in the past few days, according to a GE spokesperson. The turbine nacelle will be assembled in Saint-Nazaire, France, the three 107-meter LM Wind Power turbine blades will be manufactured in Cherbourg, also in France, while the tower sections will be produced in Seville, Spain. All components, however, will be shipped to Rotterdam where pre-assembly work and installation will take place.

“We are proud that GE Renewable Energy and SIF are using our port as a test location to develop the most powerful offshore wind turbine in the world,” said Allard Castelein, CEO of the Port of Rotterdam. “It confirms the port’s reputation and validates our focus on being an attractive partner for the offshore wind industry as it drives the energy transition.”

“In our fight against climate change we need a massive expansion of the number of wind farms at sea,” added Alderman Bonte, responsible for Rotterdam’s Energy Transition. “We are delighted that GE has selected the Port of Rotterdam as the test location for the Haliade-X 12 MW, which is the largest wind turbine in the world and can, therefore, help us accelerate the clean energy transition.”