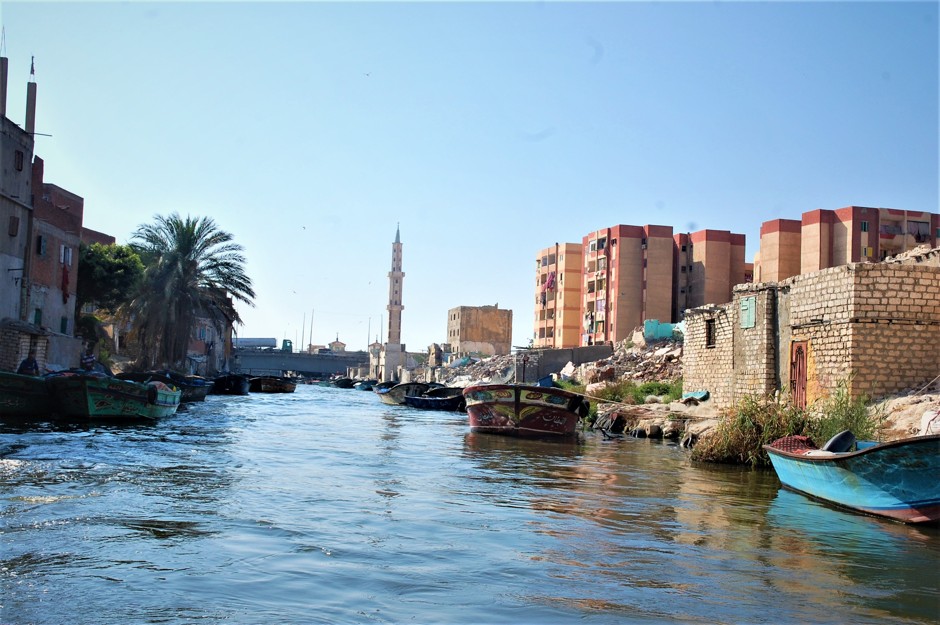 Al-Max village in Alexandria was ruined by floods in 2015. Yet, despite climate change’s growing threat to the city, critics say it has scarcely been addressed.

ALEXANDRIA— At first glance, the once vibrant fishing community of Al-Max in the Egyptian coastal city of Alexandria looks hostile to life. More than a dozen petroleum, cement, iron, and steel factories dominate the landscape, emptying gallons of industrial waste into the choked canals and polluting the vital waterway that links Egypt’s Nile Delta to the Mediterranean. The overwhelming stench of chemical waste hovers thick in the humid air.

Alexandria’s celebrated canals once drew comparisons to Venice, but now piles of rubble line the banks where vibrantly painted homes once stood—the few remaining houses are set to be demolished at the end of August. After a devastating flash flood in 2015 that left seven people dead, the Egyptian government decided to widen the canals of Al-Max necessitating, the government said, the relocation of the canal-side residents to newly constructed, public developments.

“My grandfather built these canals. Our whole life was here but now if you look, there is nothing left.”

But many of the residents would prefer to be left alone, and fend for themselves despite the risks. Karem, who has lived and worked along the canal his whole life, says that life away from the canal would be the equivalent of abandoning one’s own history.  “My grandfather built these canals,” he said. “Our whole life was here but now if you look, there is nothing left.”

The issues facing the residents of Al-Max are only a prelude of what may come for Egypt as a result of unmitigated sea-level rise. According to the 2014 Intergovernmental Panel on Climate Change’s Fifth Assessment Report (AR5), if current trends continue, Egypt will be faced with the prospect of a climate catastrophe in Alexandria.

Much of Alexandria sits on low-lying areas. With sea levels predicted to rise by as much as two feet by 2050, parts of the city are at risk of being submerged. The fertile Nile delta, the breadbasket of the country, is also at significant risk. According to AR5, Egypt’s agricultural sector could decrease by as much as 47 percent by 2060 as a result of groundwater being inundated by saltwater and “hundreds of billions of Egyptian pounds, about two to six percent of future gross domestic product (GDP), could be lost from effects on water resources, agriculture, coastal resources, and tourism,” as per the United Nations report. Compounded by a debt crisis and a rapidly growing population, Egypt is facing an unprecedented crisis.

The Alexandria government believes it’s doing all it can to stave off disaster given the limited resources that are at its disposal. “We have a lot of protection when it comes to sea-level rise,” Dr. Walid Hakiki, advisor of water resource planning and management to the governor of Alexandria told CityLab. “But, right now our main focus in our city is trying to prevent more flooding like we had in 2015.”

Founded by Alexander the Great, Alexandria once served as the capital of ancient Egypt. Its history and destiny has always been shaped by the sea that surrounds it. Earthquakes that roiled the city in the middle ages submerged much of the city’s topography: Cleopatra’s royal palace sits 16 feet below the surface of the coast of the modern Alexandria; ruins of the famed Lighthouse of Alexandria, a wonder of the ancient world, lie beneath the waters of the city’s east harbor. Yet, despite its relationship to the sea, the floods that ravaged Alexandria in 2015 caught the government by surprise.

On average Alexandria receives eight inches of rain a year. During the 2015 floods, the city was drenched with more than eight inches of rain in just two days. The Al-Max canal is particularly vulnerable because excessive rain overwhelms the city’s pumping station and drains the excess into Lake Mariout, the southern border of Alexandria, which separates the lake from the Mediterranean. The lake, which is linked to the Mediterranean by the two canals running through parts of Alexandria, sits nine feet below sea level. Water levels in the canals fluctuate any time waters are dumped into the lake, threatening the Al-Max fishing community (the banks of the other canal were largely unoccupied). With climate change increasing concern about flooding, the government’s response is to outrun rather than prepare.

“We have already transferred people who are most in danger from sea-level rise and also ensuring them to have a better quality of life,” said Hakiki. “In Egypt, we have a lot of slum areas with unsafe construction, and we want to make it more safe for residents.”

But some activists say this is not the answer. “Resettlement, especially when forced, heavily disrupts communities,” said Yahia Shawkat, an Egyptian housing rights organizer. “Many of the clearances could have been avoided with much cheaper upgrading, while many others still live in inadequate housing and are not part of the government’s plans.”

Karem’s family was one of the last ones to be relocated to the new housing blocks that tower over the canal. His new apartment may be equipped with modern amenities like air conditioning and electricity but Karem says these are luxuries they can barely afford. “Before we paid no rent, now how could afford to pay if I barely make money as it is?” Because most of the homes along the banks of the canals were informal settlements built by the fishermen themselves, residents were not entitled to any compensation.

There have been many contradictory estimates about sea-level impact on Alexandria. It’s hard to come up with policy with so many other pressing issues.

Egypt has also undertaken massive public works projects such as the construction of Egypt’s new capital which is projected to cost over $45 billion. “[Instead of protections against sea-level rise], the government has done the opposite by spending billions, building four new cities in low-lying coastal areas,” said Shawkat. “If they have built inshore protection then that makes them very expensive, if they retrofit it then that is even more unnecessary costs.”

To house its burgeoning population, or to isolate the rich from the poor some say, beginning in the 1970s Egypt has built or begun work on 22 cities with plans to construct 19 more, including the $337 million “eco-city” New Alamein City, in the country’s North Coast. Officials promise that the new city will be an “eco-friendly urban community” equipped with a desalinization plant and solar energy stations. However, addressing sea-level rise is scarcely mentioned and some researchers worry that the new city will divert resources from protecting Alexandria.

Egyptian officials, however, don’t believe any of the new cities are in any imminent danger of climate change. Dr. Hakiki told CityLab, “Right now, in the short term, there isn’t any impact on the new developments from sea-level rise.”

According to some, part of the reason why Egypt has failed to adequately address climate change is that government planners are not in agreement on the potential severity of climate-change effect. “Part of the problem has been that there have been so many contradictory estimates about sea-level impact on Alexandria,” said Dr. Mohamed A. Abdrabo, executive director of the Alexandria Research Centre for Adaptation to Climate Change. “As a decision-maker, it’s hard to come up with a policy, especially when the country is facing so many other pressing issues.”

The government in Egypt may feel that climate change mitigation is low on its list despite the numerous policies it committed to in the plan submitted to the UN Framework Convention on Climate Change ahead of the Paris Climate Change Agreement in 2016. Poverty in Egypt has significantly increased since the revolution in 2011, with 33 percent of the population living in poverty. The debt crisis plus a population that is expected to balloon from 97 million in 2018 to 166.5 million by 2050 could well seem more pressing.

Whatever measures Egypt decides to take regarding the future impact of sea-level rise, its effect on the lives of Egypt’s poorest and most vulnerable populations is already taking its toll.

On a bright and breezy morning, Karem prepares his modest fishing boat. He’s happy to be at sea and feel the sea air whip by his face as he speeds through the canal towards the Mediterranean.

As we passed a pile of rubble along the canal’s bank, Karem slowed the boat and pointed out a red door still standing in its midst.

“That used to be my house,” Karem said. “Every day I have to pass it and I feel pain in my heart.”