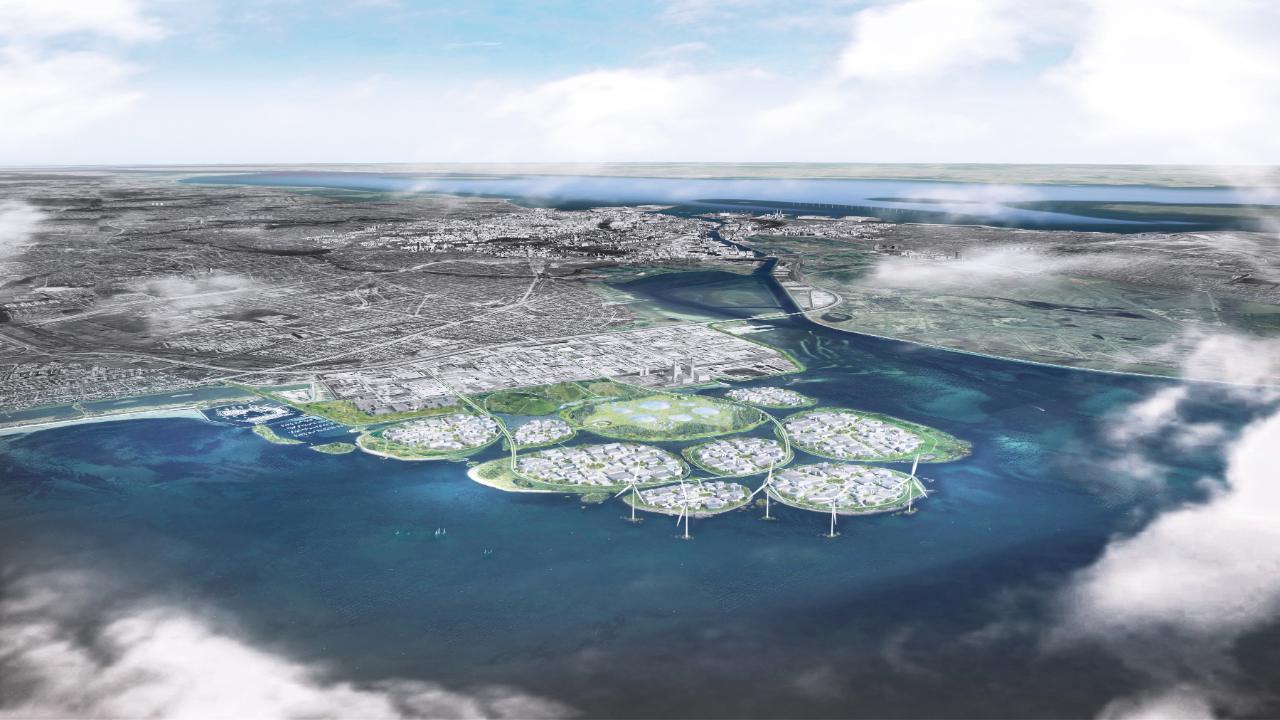 The Danish capital is expanding its land mass and creating climate resiliency. But is it sustainable?

In a bid to create new space for green industries and fossil-free energy production, greater Copenhagen wants to build an entirely new business and infrastructure district on the city’s southwestern edge. Instead of taking up existing land, it would be constructed just off the coast as a new archipelago of islands known as Holmene (“the islets”) that would possess more than 740 acres of new land upon completion. Located in the suburban municipality of Hvidovre, the islands would also serve as a flood barrier protecting the coast, their green fringes and reed beds stretching out towards small islets that would act as an effective sponge for storm surge.

Announced earlier this month, the grand scheme would be constructed gradually using earth excavated during construction work and expansion of the Metro system, whose City Circle line should open in summer 2019. Each new island would be initiated only when the existing land has been allotted for use, a process that could take as long as half a century. Overall, the site could also cut Copenhagen’s carbon footprint, as the islands are also planned to host what would be Northern Europe’s largest waste-to-energy plant—an Urban Power-designed facility which could convert trash into enough electricity to meet 25 percent of Copenhagen’s needs.

The plan sits in a wider development context whose results are ambivalent. Greater Copenhagen has in fact been going through an island-building spree of late, and in some cases, these projects may be working against the city’s long-term sustainability.

The city launched the creation of another major offshore land mass earlier this fall, close to the Danish capital’s heart. Located in the harbor waters just northeast of Copenhagen’s Little Mermaid statue, the planned island of Lynetteholmen would arguably have an even more striking effect on the urban fabric. A predominantly residential island, it would eventually house up to 35,000 residents when completed by 2050. By then, it would join a set of long, complete islets flanking the sides of the city’s South Harbor. Key to both the Lynetteholmen plan and that for the new archipelago at Hvidovre is their cost. They would, according to their official promoters, not cost taxpayers a single cent. That’s because they follow a funding model Copenhagen has been using since the 1990s which has sparked international envy but whose outcomes are increasingly causing skepticism.

The Danish capital has been redeveloping marginal and ex-industrial areas since the 1990s through a highly influential process Bruce Katz has called “The Copenhagen Model.” Under this model, the state transferred large tracts of public land (generally peripheral or brownfield) to a state-affiliated, privately managed company called By og Havn (City and Port), which then developed regeneration plans for them. Crucially, this regeneration was not funded publicly but by speculating on the increased revenue the city could receive after rezoning for residential and commercial use.

As a result of this public-private pact, the city was able to finance a major extension of its Metro system through calculating the increased land values along its length. That land was then used to build the sparkling new district built on previously marginal land at Ørestad. Unlocking large areas of land for development without major strain on the public purse has had clear advantages. As Jesper Pagh, architect, lecturer, and former head of Denmark’s Architecture Foundation told CityLab over the phone, the model:

“…was put into place over 25 years ago when Copenhagen was on the verge of bankruptcy following post-industrial decline. It was a model that at that time could activate a lot of assets that the city had on the harbor and in ex-industrial areas… [I]t created a viable state-backed model for the city’s resurrection after a long period in which no one really believed in the development of cities. It’s a powerful model that allows us to do a lot of long-term strategic planning. It’s a matter, however, of what you put into this model and what you hope to get out of it.”

A model of inequality?

It may no longer be serving the city so well. A focus on balancing the books by providing profitable commercial development opportunities has tended to sideline the city’s pressing need for genuinely affordable housing. While the city requires developers to deliver a certain amount of lower-cost housing (typically 25 percent), these quotas are notorious for being diluted. Moreover, the “affordable” rents are calculated as a reduced percentage of local market rates. In what are often expensive areas, they end up still not being genuinely affordable for the lower-income tenants for whom they are intended. Meanwhile, all this takes place in a city that had 19.4 million square feet of vacant office space as of 2016. Converting some of this space into affordable housing would face a multitude of pragmatic and political hurdles, but building a new island isn’t easy either.

Furthermore, long-term strategic planning that stretches over decades can often fail to foresee how changed circumstances might alter plans. This danger can already be seen at work with the Metro extension. Founded on the understanding that large areas of scrubby public parkland just south of the city center would be freed up for development, the project’s post-completion financing ran up against trouble after a powerful public backlashat the idea of building on what is currently accessible open land. Under pressure, development in the area was shrunk while many of the planned homes were shifted to another area with a more peripheral position and worse transit connections. The compromise is not ideal, but money for the Metro’s cost has to be recouped somehow, and the city has found itself locked into development.

As a result of such experiences, there is some skepticism about the new island plans for the inner harbor. The Lynetteholmen plan could succeed in creating new high-value land in a central site, but it might do little or nothing to ease the city’s affordable housing shortage, pumping in high-cost homes that work well for investors but not for local residents. Some local politicians—notably members of Unity List, a minority faction in the city’s governing coalition—sense that at best a mixed result lies ahead:

“With local plans, we can only ensure that 25 percent of the [planned] housing becomes general,” local deputy Ninna Hedeager Olsen told magazine Ingeniøren in October 2018:

“That is not enough. If we are to ensure that cheap public housing and good green areas become the key elements of a new residential island, it’s crucial that not all the grounds are sold at market prices. Otherwise, this will just be another project for VIPs to which people with ordinary incomes won’t get access—and where costs for creating good green areas will turn out to be too high for the municipality.”

The plan would also entail the construction of one of the most controversial plans in Copenhagen’s recent history, a proposal for a road tunnel across the harbor. Debated for over 20 years, the project is seen by both the city’s Social Democratic mayor Frank Jensen and center-right party Venstre as essential to easing traffic flows between the two banks of Copenhagen’s harbor mouth. Politicians from left-wing party Unity List (who rule in coalition with Jensen’s Social Democrats) and centrists the Radicals, however, hold that the tunnel would in itself attract more traffic to the inner city’s roads and work directly against the general pro-bike, pro-public-transit drive of contemporary Copenhagen’s city planning. Creating the island at Lynetteholmen would tip the scales in the tunnel’s favor. Acting as a connector for a two-section tunnel, it would probably not function well without the new road connection. Indeed, in a city where the tunnel plan is intensely politicized, some see the Lynetteholm island plan partly as a ploy intended to push through the new underground road’s construction. Yet again it seems, the city may be getting the desire to develop fresh sites and the desire to improve life for its citizens twisted.

So where does this leave plans for the new eco-archipelago at Hvidovre? The desire to use the site to create more clean energy and develop a more sustainable coastal strip is impressive. But in a climate of cautious curiosity, some are already wondering if the islands aren’t really just “castles in the air” whose optimistic funding model isn’t merely wishful-thinking based, as seems to be happening with the Metro extension, on calculations whose basis may not hold for the plans’ 50-year genesis.

Copenhagen may continue to inspire the world with its green leadership, but locally, the jury is still out on the long-term effect of plans that dazzle on the drawing board.