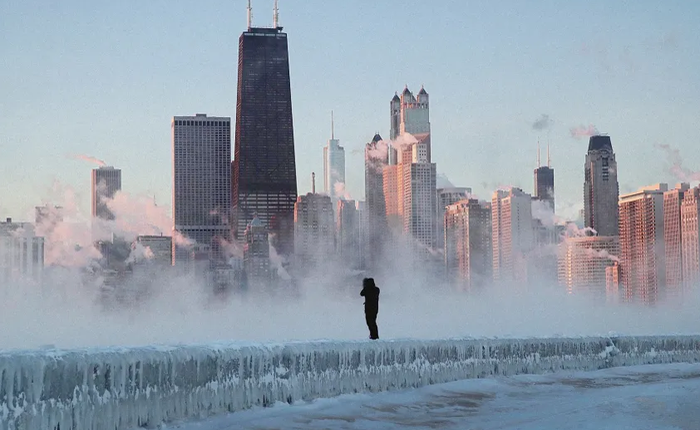 Why is it so cold? Because the planet is dangerously hot

The bone-chilling temperatures currently pummeling the Midwest are the direct result of the warming Arctic losing its grip on the polar jet stream that usually keeps frigid air trapped up north.

The wind chill was 51 degrees below zero in Chicago on Wednesday, and minus 49 in Minneapolis. That’s not evidence, despite Trump’s tweets questioning global “waming” [sic], that climate change is slowing down.

The reverse is true: The last four years have been the hottest for the planet on record. 2018, which was hotter than any year in the 19th or 20th centuries, was exceeded only by 2015, 2016, and 2017. The world now experiences record-obliterating hot weather nearly twice as oftenas record cold. (In Australia this January, temperatures soaring as high as 120 degrees have led to fires, power outages, and killed millions of fish and dozens of wild horses.) In the Upper Midwest, the current weather notwithstanding, periods of cold have become less common; most of January was much warmer than usual, so the average for the month may be higher than the norm. A few days of cold don’t change the overall trend.

At the same time, while the world heats up, climate change is also counterintuitively linked to extreme cold: As temperatures rise in the Arctic, many researchers believe that can lead to frigid temperatures in the continental U.S.

As humans have pumped CO2 into the atmosphere, the world has warmed about 1 degree Celsius (1.8 degrees Fahrenheit). But the Arctic is heating up two to three times faster than the global average, and as that happens–shrinking the temperature difference between the north and south–it can weaken the polar jet stream that usually traps the frigid polar vortex in the Arctic. A weaker jet stream lets the cold air escape south to places like the Upper Midwest, Siberia, and Sweden.

One recent study looked at data stretching back to 1950, and found a clear link between warmer temperatures in the Arctic and freezing weather in the Eastern U.S. Other studies have also linked a warmer Arctic to longer periods of extreme weather farther south, from droughts and heat waves to cold. The research is still ongoing. But it’s possible that brutal cold snaps–along with heat waves, drought, wildfires, hurricanes, and other extreme weather–will become more common as climate change progresses. This year, the concentration of heat-trapping carbon dioxide in the atmosphere is likely to rise beyond 410 parts per million, another record-breaking milestone.