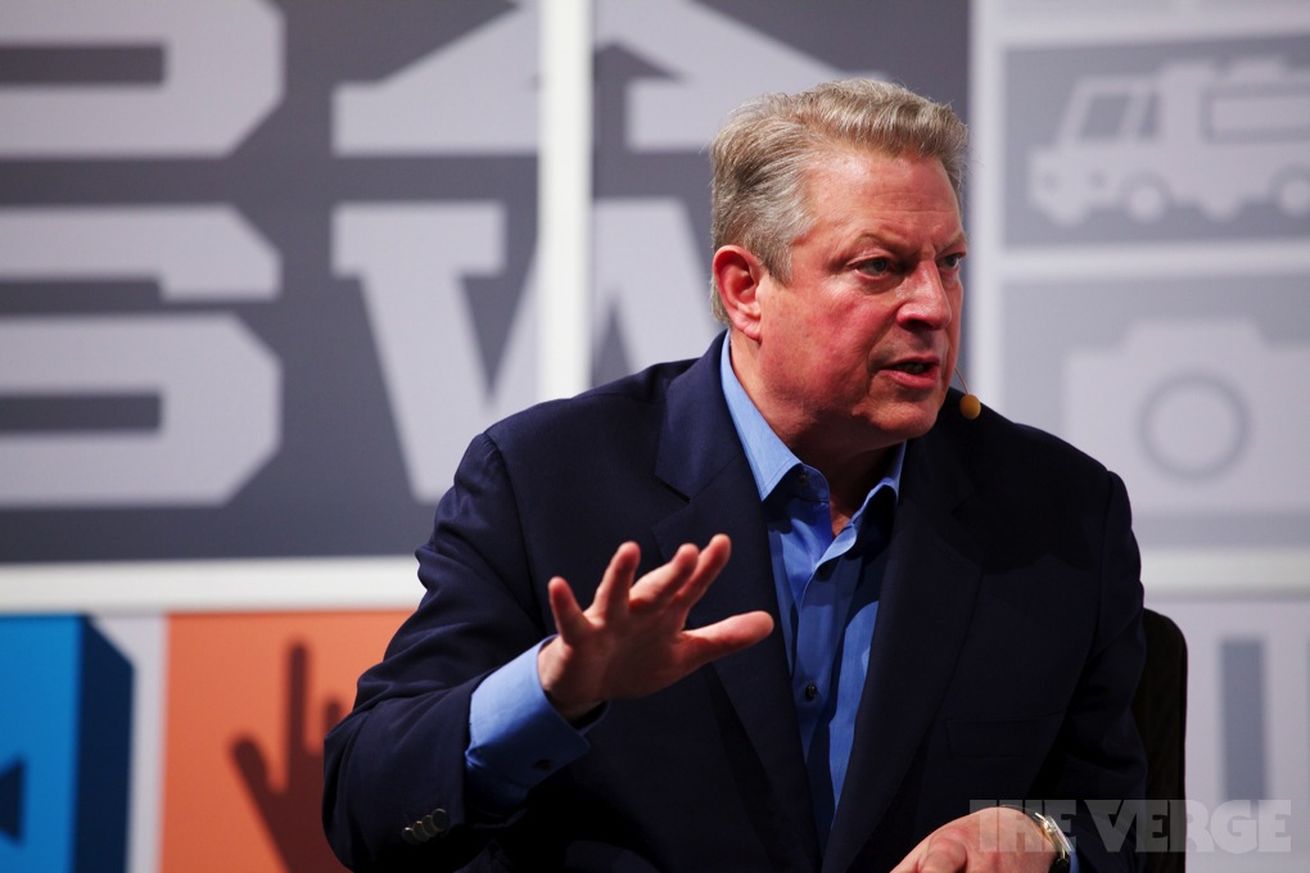 Why Al Gore isn't giving up the climate change fight

We’re in the early stages of a global sustainability revolution that has the magnitude of the Industrial Revolution but the speed of the Digital Revolution.’

The Trump Administration doesn’t believe in human-made climate change. Over the last year, it has vowed to pull the US out of the Paris climate deal, promised to repeal a key policy to reduce greenhouse gas emissions, and scrapped the word climate change from government websites. But Al Gore is not discouraged. In fact, the former vice president says that there are many reasons to be optimistic.

On December 4th, Gore is hosting a 24-hour event focused on efforts to combat climate change around the world, from US cities switching to renewable energy sources to Australian elementary school kids demanding climate action. The live broadcast, called 24 Hours of Reality, will include musicians, actors, and politicians like California Governor Jerry Brown. It’s a call to action and a demand for governments to act boldly — and as such, it’s imbued with a feeling of hope.

That’s because, no matter what kind of discouraging signals the current administration sends, Gore says there are signs of hope: his non-profit organization, The Climate Reality Project, is creating an army of climate activists all over the world, called climate reality leaders; solar energy is costing a few cents per kilowatt hour; and 37 coal mines are closing in India this year.

The 69-year-old Gore has been a prominent member of the environmental movement since the 1970s, winning a Nobel prize for his efforts in 2007. Earlier this year, he released a sequel to his 2006 documentary An Inconvenient Truth, which spread awareness about global warming. Over the last few years, however, Gore has also been criticized for his role in the movement, with some activists complaining that he’s too polarizing and not very representative of those who will be hit particularly hard by climate change, which includes the impoverished and people of color.

But Gore says he isn’t going anywhere. With Trump in the White House, his resolve to advocate for climate change policies has only become stronger. Ahead of the 24-hour live broadcast, which begins at 6PM ET on Monday, The Verge spoke with Gore about why the US is such an outlier when it comes to climate change, how to sway public opinion, and when he’ll stop doing what he’s doing.

The interview has been edited for length and clarity.

Our climate reality leaders — and we now have almost 14,000 of them — come from every country in the world. There’s a concerted effort to organize watch parties and to invite those who may not have formed their views on the climate crisis, to listen and hopefully keep an open mind. And then hopefully, some will join the ranks of those who realize that this is the leading challenge human civilization must confront. We have had a very favorable experience in past years with persuading people who are undecided about this challenge to listen and watch with an open mind.

I’m from Italy, and when I go back now,people ask me, “What’s going on with the US? Why do Americans believe thatclimate change is a hoax?” What would you tell them?

This experiment [the Trump presidency] is less than a year old. In medicine and science, some experiments are terminated early for ethical reasons. I don’t have any inside information that that will happen with Donald Trump, but as you know, his former national security advisor pleaded guilty to a felony and is now actively cooperating as a witness for the prosecution. That seems to be heading toward Donald Trump not necessarily with an indictment, because he’s a sitting president, but with a compilation of facts that could serve as a source of genuine concern for the US Congress, [leading to it] exercising its constitutional responsibility.

Are you hoping for an impeachment, then?

It’s not for me to jump to conclusions about a legal process that is now unfolding. I’m just noting that the president actually may not be reelected in 2020, [and] could potentially leave office before then. But in any case, however long he is president, the decision by state governments in the US — including some of our largest states, New York and California and many others — decisions by hundreds of cities, and thousands of business leaders, all of whom have said we’re still in the Paris Agreement with the hashtag #WeGotThis, will ensure that the United States meets and exceeds its commitment under the Paris Agreement, regardless of what Donald Trump tweets or says.

Final point: the technological and business trends are now in the driver seat. We need policy, and we could move faster with good policy, but the cost reduction curves for renewable energy and energy storage and efficiency improvements and electric vehicles are now revolutionizing business and every human endeavor. We’re in the early stages of a global sustainability revolution that has the magnitude of the Industrial Revolution, but the speed of the digital revolution. And it is decoupling CO2 emissions from economic growth, it is disrupting business models throughout the world, it’s being jumpstarted in developing and developed countries alike, and it is unstoppable.

Some people believe you’re too polarizing to be the spokesperson for environmental activism. What do you think about that?

The social science research definitively debunks that meme. I don’t know if you’re aware of Joe Romm and his climate blog — he was the deputy secretary of energy in the Clinton years, and he’s among those who’s done very careful research into the relationship between my personal role and public opinion on climate. That meme is simply inaccurate. For three years, following the release of my first movie, bipartisanship actually increased significantly. I was able to run television advertisements in the United States in prime time, with prominent Republican leaders sitting alongside Democratic leaders.

The bipartisanship hit very high levels, until Barack Obama was elected and the Koch brothers and others financed the National Tea Party movement, [which] began in January of ‘09 and coincided with the harsh impact of the Great Recession. The hundreds of millions of dollars spent by the Koch brothers and Exxon Mobil and other large carbon polluters intentionally created a partisan wedge that had at its principal target Barack Obama and his administration. So anyone who’s visible in the climate movement is a target for climate deniers. You must have taken note of the harsh impacts on the Holy Father, Pope Francis, as soon as he issued his encyclical. I feel like I’m in about as good a company as there is in this Earth or beyond.

Some people also say we need new voices to speak about climate change. Maybe women, people of color, or people who are directly affected by climate change. Are you sure you’re the best person to continue advocating for the environment?

It’s not a zero sum game. The fact that I speak out on climate is not a bar to others speaking out. Indeed, the Climate Reality Project, in our training program and also with Climate Speakers Bureau, has had many public events focused on recruiting voices in the African American community, the Latino and Hispanic community, the Native American community. We have reached out to the faith-based communities around the world and especially in the US, and we have sought to elevate the voices of minorities and the disadvantaged, and to cultivate new voices within those communities speaking out on climate. We have made a conscious effort to broaden the spectrum of voices and life experiences and points of views that are speaking out on the climate issue.

I think we must continue efforts to bring Republicans and conservatives into this struggle, of course. In my recent movie, made by Bonni Cohen and Jon Shenk, we spotlighted a conservative Republican Trump-supporting mayor from Texas who has a very powerful and unique voice, Mayor Dale Ross of Georgetown, Texas, who has come to the issue through the economic benefits, but noticed that it’s a pleasant side benefit that we’re helping to save the future of humanity. And he’s now involved to speak out.

There are now 30 new Republican members of the House of Representatives who have joined the climate solution’s caucus. There are 10 Republican US Senators who are now actively considering a public switch in their point of view. Two of them already have. We’re not far from a working majority in the Congress on this issue, and indeed we have actually won a few votes this year that weren’t highly visible. But we defeated Donald Trump’s proposed change to the methane rule, for example. And we’re actually making progress. Ultimately, any big policy change in the US has to have bipartisan support, so yes, we have to continue working for more Republican support for the action that’s needed.

What’s your final goal? When will you stop and say, “I’ve accomplished what I wanted to accomplish?”

I’ve worked on this for 40 years, and throughout that time, the central problem has been that the maximum that’s politically feasible still falls short of the minimum needed to satisfy the laws of physics and stave off this crisis. And confronted with that big gap, you have two options: one is despair, which accomplishes nothing, and the other option is to expand the limits of what is politically feasible. In my own mind, I have always felt that the definition of victory will be when a majority of political leaders and policymakers throughout the world and throughout the United States are persuaded by public opinion to compete sincerely and enthusiastically in offering genuinely meaningful solutions to this crisis.

We’re not there yet, and we’re not solving this crisis fast enough. But we’re gaining speed. There was an economist in the US in the 20th century who said, “Things take longer to happen than you think they will, but then they happen much faster than you thought they could.” We are at the inflection point now where changes are beginning to happen faster than anyone thought they could. The momentum is increasing daily, and when we cross the threshold beyond which it is clear that we will succeed, then that will be a happy day.