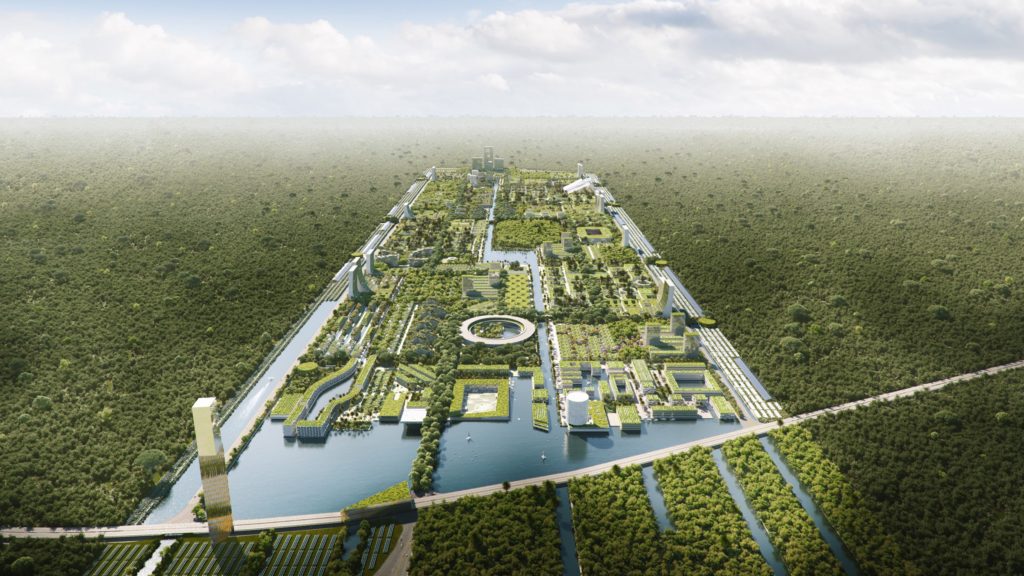 The Future of Architecture: 7 Master Plans That Rethink the Way Cities Work

The urban way of life is en route towards completely new frontiers.

Within the past two decades, slews of new cities have appeared out of what seems like thin air. Places facing rapid urbanization and population growth have expressed this trend the most. Master planned cities in developing countries are seen as a potential means to shift away from agricultural and resource-based economies. Another driver behind this new cities trend is the looming threat of climate change.

Ideas advocating for increased utilization of technology, greater integration of the natural environment, and even developing floating cities at sea have all been explored and implemented. The way cities have traditionally developed has been completely flipped on its head, and this is only the tip of the iceberg. Here are seven planned cities around the world that completely rethink the way urban living works.

Italian architect Stefano Boeri unveiled plans for a forested smart city situated in Cancun, Mexico, designed to be a pioneer for eco-efficient developments. Smart Forest City Cancun is intended to sit on a 557 hectare site near the city and, according to the architect, will contain 7.5 million plants. Both botanical garden and contemporary city, it intends to form a greater relationship between nature and the urban environment. The abundance of greenery will serve to depollute the surrounding environment. Data collection and management will be used to improve various aspects of city life. The forest city will also be self-sufficient in producing its own food and energy. Smart Forest City Cancun is designed to become a center for advanced research and will house 130,000 inhabitants.

Cryptocurrency millionaire, Jeffrey Berns, plans to transform a large parcel of Nevada’s desert into a smart city powered by blockchain technology. Stretching 67,000 acres, Innovation Park, intends to be a new kind of business and residential community. The land was purchased for $170 million, and it’s already home to the headquarters of his company, Blockchains. Innovation Park is intended to be a smart city with a decentralized blockchain infrastructure underlying all interaction. Los Angeles-based architecture firms Ehrlich Yanai Rhee Chaney Architects and Tom Wiscombe Architecture were enlisted to design the city. They plan to utilize cutting-edge technologies, integrate the city within the landscape, and ensure it functions sustainably.

Sidewalk Labs, a smart city startup from Google parent company, Alphabet, released a master plan to convert a large section of Toronto’s shoreline into what they believe will be the most innovative district in the world. The 1,524-page proposal includes plans to expediently construct a collection of mixed-use buildings, using mass timber and modular components. A light-rail extension, snow-melting, heated pavement, self-driving delivery dollies, and an expected net zero carbon footprint were planned as well. Wifi would also be publicly available and sensors throughout the development would collect data on energy consumption, building use, and traffic patterns, to name a few.

This facet of the project has been a source of controversy as Sidewalk Labs hasn’t been entirely transparent about how it would use the data and who would control it. Criticism doesn’t stop there. It’s been revealed that Sidewalk Labs plans to develop 350 acres of space surrounding the original waterfront parcel, and many see this as a corporate takeover of what should be a public, democratic process.

On October 24, 2017, Crown Prince and deputy prime minister of Saudi Arabia, Mohammed bin Salman, announced a project to erect a futuristic, megacity development located in the north west of Saudi Arabia called NEOM. The city will cover a total area of 10,000 square miles, 33 times larger than New York City, including land located within the Egyptian and Jordanian borders. $500 billion is the proposed cost of NEOM, which aims to be financed by the Saudi government, its sovereign wealth fund, and local and foreign investors. Saudi Arabia also intends to sell a stake in its state oil company, Saudi Aramco, in order to fund the project.

Seeking to become the world’s most livable city, NEOM features a master plan that is incredibly ambitious, if not far fetched, with ideas ranging from flying taxis to an artificial moon. Due to certain controversies, foreign investment has waned. However, an airport has already been constructed and its first phase of development is expected to be completed by 2025.

In order to address rapid urbanization and rising sea levels, the UN unveiled a framework for how floating cities could be used as a solution. Bjarke Ingels of BIG showcased his design for a floating city prototype that would be made out of mass timber and bamboo. According to OCEANIX, a group investing in floating cities, the proposal would be flood proof, earthquake proof and tsunami proof.

Entitled Oceanix Cities, they would comprise a series of modular hexagonal islands, where bamboo grown on the islands could be used to make glulam beams. BIG envisions the floating cities to be zero-waste, energy-positive, and self-sustaining. They would feature mid-rise housing around shared, green public spaces where agriculture and recreation would co-exist. The systems on each city would be connected, linking waste, food, water and mobility.

Eko Atlantic City is a planned city within Lagos State, Nigeria, being constructed on reclaimed land from the Atlantic Ocean. Slated as a “new Dubai”, the city is anticipating at least 250,000 residents. It was also designed to help prevent continued erosion to Lagos State’s coastline. Eko Atlantic City is expected to satisfy needs relating to financial, commercial, residential, and tourist accommodations, and it will have an independent source of energy to power it.

The city plans to be sustainable, clean and energy-efficient, with minimal carbon emissions. The project has been criticized due to coastal erosion and ocean surges resulting from ongoing construction. Ocean water surges have flooded nearby locales, forcing residents to relocate and even claiming lives. There are also questions over the accessibility of the city to local, pre-existing populations.

Oman’s new planned city, Madinat Al-Irfan, is located to the west of its capital, Muscat. A convention center and a few hotels have been constructed on the 1,500-acre site. The city plans to develop over the next 30 years, where it will add a central business district, a university, government buildings, souks, mosques, and residential neighborhoods. It aims to host a population of 280,000. For Madinat Al-Irfan, there’s a focus on a more compact and efficient use of land that has walkable areas and green spaces.

This is in line with New Urbanist design, which develops spaces meant to foster growth that isn’t oil based and can be accomplished sustainably. Rather than relying on new technology to foster sustainability, the city plans to use practical methods, such as featuring screens and overhangs on buildings to cool streets. Madinat Al-Irfan diverges from its master planned peers in the Persian Gulf through its sustainable and efficient approach to city building.