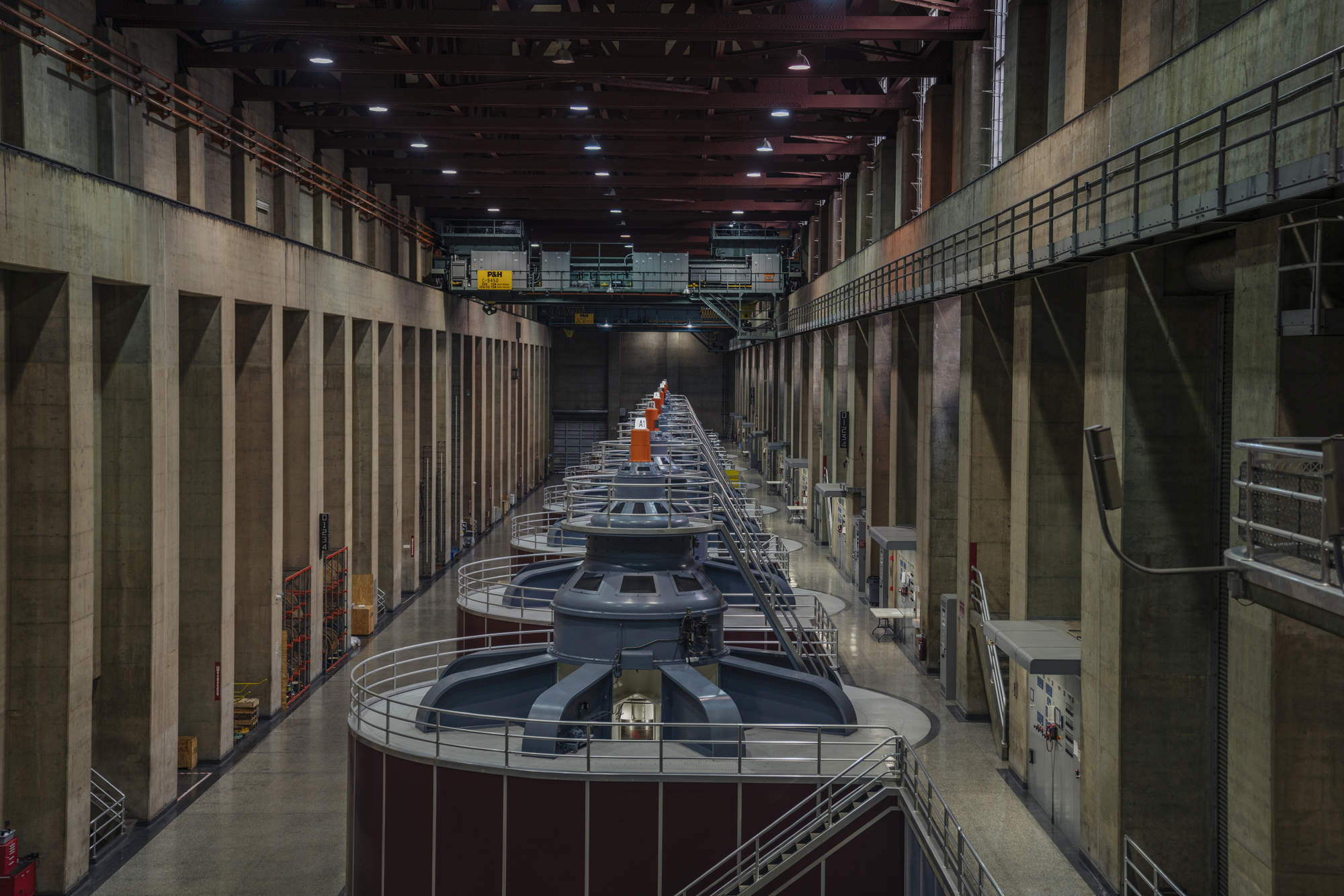 Hoover Dam was a public works project likened to the pyramids. Now, after channeling a river, what if it could tap the power of the sun and wind?

Hoover Dam helped transform the American West, harnessing the force of the Colorado River — along with millions of cubic feet of concrete and tens of millions of pounds of steel — to power millions of homes and businesses. It was one of the great engineering feats of the 20th century.

Now it is the focus of a distinctly 21st-century challenge: turning the dam into a vast reservoir of excess electricity, fed by the solar farms and wind turbines that represent the power sources of the future.

The Los Angeles Department of Water and Power, an original operator of the dam when it was erected in the 1930s, wants to equip it with a $3 billion pipeline and a pump station powered by solar and wind energy. The pump station, downstream, would help regulate the water flow through the dam’s generators, sending water back to the top to help manage electricity at times of peak demand.

The net result would be a kind of energy storage — performing much the same function as the giant lithium-ion batteries being developed to absorb and release power.

The process begins when the dam converts water into energy.

The Hoover Dam project may help answer a looming question for the energy industry: how to come up with affordable and efficient power storage, which is seen as the key to transforming the industry and helping curb carbon emissions.

Because the sun does not always shine, and winds can be inconsistent, power companies look for ways to bank the electricity generated from those sources for use when their output slacks off. Otherwise, they have to fire up fossil-fuel plants to meet periods of high demand.

And when solar and wind farms produce more electricity than consumers need, California utilities have had to find ways to get rid of it — including giving it away to other states — or risk overloading the electric grid and causing blackouts.

“I think we have to look at this as a once-in-a-century moment,” said Mayor Eric M. Garcetti of Los Angeles. “So far, it looks really possible. It looks sustainable, and it looks clean.”

The target for completion is 2028, and some say the effort could inspire similar innovations at other dams. Enhancing energy storage could also affect plans for billions of dollars in wind projects being proposed by the billionaires Warren E. Buffett and Philip F. Anschutz.

But the proposal will have to contend with political hurdles, including environmental concerns and the interests of those who use the river for drinking, recreation and services.

In Bullhead City, Ariz., and Laughlin, Nev. — sister cities on opposite sides of the Colorado, about 90 miles south of the dam — water levels along certain stretches depend on when dams open and close, and some residents see a change in its flow as a disruption, if not a threat.

“Any idea like this has to pass much more than engineering feasibility,” Peter Gleick, a co-founder of the Pacific Institute, a think tank in Oakland, Calif., and a member of the National Academy of Sciences, internationally known for his work on climate issues. “It has to be environmentally, politically and economically vetted, and that’s likely to prove to be the real problem.”

AN IDEA COMES OF AGE

Using Hoover Dam to help manage the electricity grid has been mentioned informally over the last 15 years. But no one pursued the idea seriously until about a year ago, as California began grappling with the need to better manage its soaring alternative-electricity production — part of weaning itself from coal-fired and nuclear power plants.

In California, by far the leading state in solar power production, that has sometimes meant paying other states to take excess electricity. Companies like Tesla have gotten into the picture, making lithium-ion batteries that are deployed by some utilities, but that form of storage generally remains pricey.

Lazard, the financial advisory and asset management firm, has estimated that utility-scale lithium-ion batteries cost 26 cents a kilowatt-hour, compared with 15 cents for a pumped-storage hydroelectric project. The typical household pays about 12.5 cents a kilowatt-hour for electricity.

Some dams already provide a basis for the Hoover Dam proposal. Los Angeles operates a hydroelectric plant at Pyramid Lake, about 50 miles northwest of the city, that stores energy by using the electric grid to spin a turbine backward and pump water back into the lake.

But the Hoover Dam proposal would operate differently. The dam, with its towering 726-foot concrete wall and its 17 power generators that came online in 1936, would not be touched. Instead, engineers propose building a pump station about 20 miles downstream from the main reservoir, Lake Mead, the nation’s largest artificial lake. A pipeline would run partly or fully underground, depending on the location ultimately approved.

“Hoover Dam is ideal for this,” said Kelly Sanders, an assistant professor of civil and environmental engineering at the University of Southern California. “It’s a gigantic plant. We don’t have anything on the horizon as far as batteries of that magnitude.”

Sri Narayan, a chemistry professor at the university, said his studies of lithium-ion batteries showed that they simply weren’t ready to store the loads needed to manage all of the wind and solar power coming online.

“With lithium-ion batteries, you have durability issues,” Mr. Narayan said. “If they last five to 10 years, that would be a stretch, especially because we expect to use these facilities at full capacity. It has to be 10 times more durable than it is today.”

Mr. Narayan said he felt the Hoover Dam project should be given serious consideration because pumped-storage projects had been tested and proven for decades. In a comparison with lithium-ion batteries, he said, “I think the argument is very good.”

The Los Angeles Department of Water and Power, the nation’s largest municipal utility, says its proposal would increase the productivity of the dam, which operates at just 20 percent of its potential, to avoid releasing too much water at once and flooding towns downstream.

Engineers have conducted initial feasibility studies, including a review of locations for the pump station that would have as little adverse impact on the environment and nearby communities as possible.

But because Hoover Dam sits on federal land and operates under the Bureau of Reclamation, part of the Interior Department, the bureau must back the project before it can proceed.

“We’re aware of the concept, but at this point our regional management has not seen the concept in enough detail to know where we would stand on the overall project,” said Doug Hendrix, a bureau spokesman.

If the bureau agrees to consider the project, the National Park Service will review the environmental, scientific and aesthetic impact on the downstream recreation area. If the Los Angeles utility receives approval, Park Service officials have told it, the agency wants the pumping operation largely invisible to the public, which could require another engineering feat.

Among the considerations is the effect on bighorn sheep that roam Black Canyon, just below the dam, and on drinking water for places like Bullhead City. Some environmentalists worry that adding a pump facility would impair water flow farther downstream, in particular at the Colorado River Delta, a mostly dry riverbed in Mexico that no longer connects to the sea.

Another concern is that the pump station would draw water from or close to Lake Mohave, where water enthusiasts boat, fish, ride Jet-Skis, kayak and canoe.

Keri Simons, a manager of Watercraft Adventures, a 27-year-old rental business in Laughlin, said water levels already fluctuated in stretches of the Colorado close to the river towns. The smaller Davis Dam, just north of Laughlin, shuts off the flow overnight.

One morning this year, the water level just outside town dropped so low that you could walk across the riverbed, Ms. Simons said. “We couldn’t put any boats out until noon,” she said. “Half the river was a sandbar.”

Even if no water is lost because of the pumping project, the thought of any additional stress on the system worries Toby Cotter, the city manager of Bullhead City.

The town thrives on the summer tourism that draws some two million visitors to the area for recreation on the greenish-blue waters, Mr. Cotter said. “That lake is the lifeblood of this community,” he said. “It’s not uncommon to see 100 boats on that lake.”

Environmentalists have been pushing Los Angeles to stop using fossil fuels and produce electricity from alternative sources like solar and wind power. And Mayor Garcetti said he would like his city to be the first in the nation to operate solely on clean energy, while maintaining a reliable electric system.

“Our challenge is: How do we get to 100 percent green?” he said. “Storage helps. There’s no bigger battery in our system than Hoover Dam.”

But old wounds are still raw with some along the Colorado. A coal-fired power plant in Laughlin that the Department of Water and Power and other utilities operated was shut down in 2006, costing 500 jobs and causing the local economies to buckle. And a decision long ago to allot Nevada a small fraction of the water that California and Arizona can draw remains a sore point.

“There’s nothing going on in California with power that has given people who are dealing with them any comfort,” said Joseph Hardy, a Nevada state senator. “I think from a political standpoint, we would have to allay the fears of California, Nevada and Arizona. There will be a myriad of concerns.”

The decision to close the coal plant angered many residents. They wanted the utility to simply add emission-control features known as scrubbers to reduce carbon pollution. The community later hoped a natural-gas plant would replace the coal facility, but Los Angeles could not agree with the local communities on a site.

There have been local efforts to convert the site into a development of housing and businesses — or to build a solar farm on a plot of land, if Los Angeles would buy the power.

Mr. Garcetti said other states and cities had worked with Los Angeles to build economic development projects for their communities, so he would like to consider similar ideas for the Hoover Dam project, as well as ways to benefit the entire region. “I’m all open ears to what their needs are,” he said.

Mr. Hardy is wary of big-city promises. The Department of Water and Power has treated Nevada so cavalierly, he said, that a security guard at the old coal plant site once refused to return a ball to children after it bounced over the property’s fence. He said the guard had told the children’s parents that they could file a claim to get it back — a process that would take two to three years.

But he said he was willing to meet with Los Angeles officials to make the project successful.

“The hurdles are minimal and the negotiations simple, as long as everybody agrees with Nevada,” Mr. Hardy said. “It would be nice if there was a table that they would come to. I’ll provide the table.”