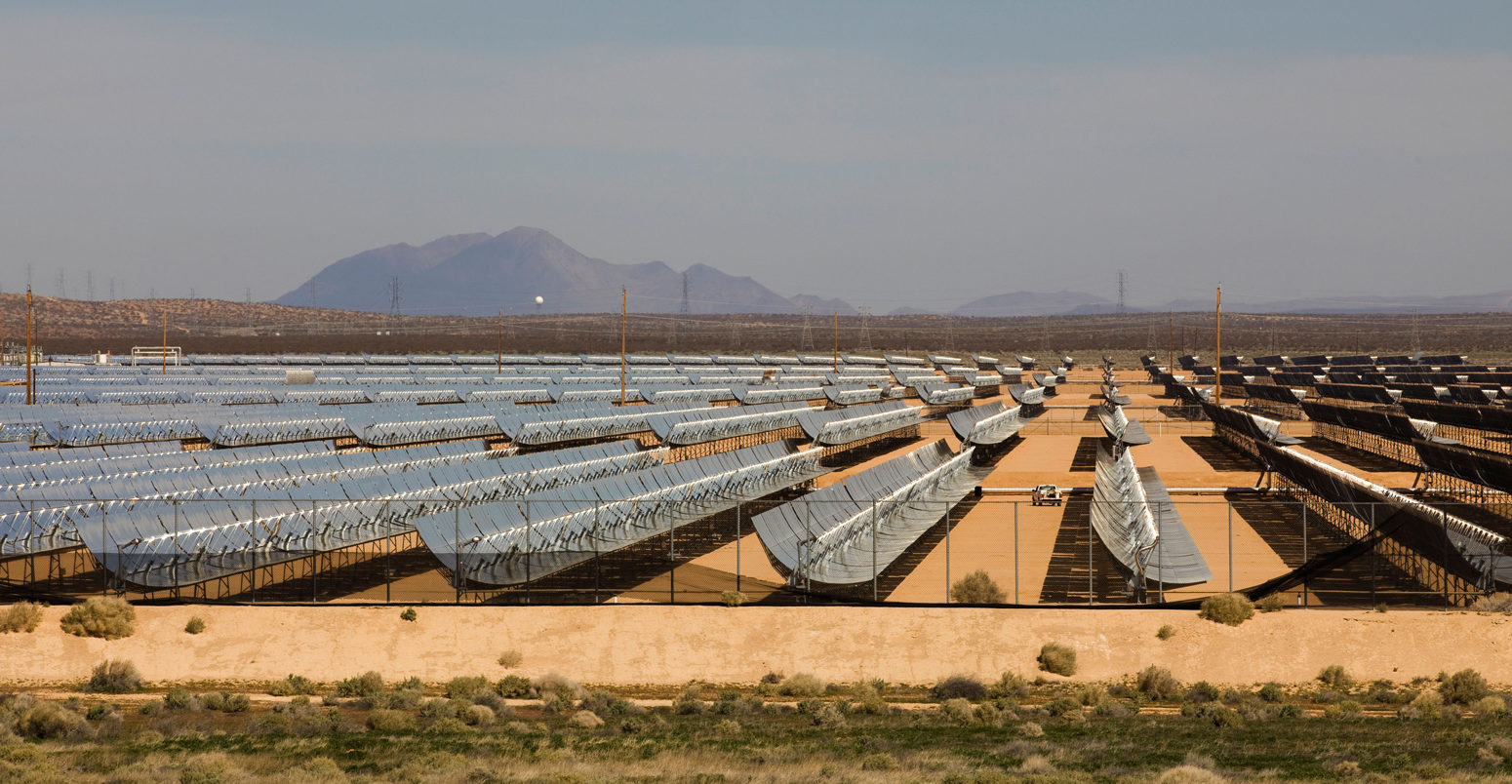 Banks of solar panels would be able to replace every electricity-producing dam in the US using just 13% of the space, according to a new study.

The researchers say this “surprisingly modest” figure provides a “tantalising” vision of what could be achieved if the nation phased out a power source that, while renewable, takes a significant toll on ecosystems.

As it stands, hydropower is an essential component in the nation’s power mix, contributing over 6% of its electricity and offering a flexibility that is not always provided by other renewables.

But with existing infrastructure nearing the end of its lifespan, and growing concerns about its environmental impact, US dams are increasingly being removed from service altogether.

If hydro dams are not replaced, other technologies will need to step into the breach, and the new paper – published in Nature Sustainability – suggests the mass rollout of solar power is a potential option.

While the researchers emphasise their results are “clearly theoretical”, they highlight the capacity of alternative renewables to replace hydro dams – which could also take pressure off disrupted US waterways.

Dams have been used in the US to generate renewable energy for well over a century, with the world’s first hydroelectric power plant beginning operation in Wisconsin in 1882. By 1940, hydropower accounted for 40% of the nation’s electricity generation.

Today, much of the developing world is seeking to imitate this rapid growth. Nations from Angola to Myanmar are investing in large hydropower projects to generate power in a manner touted as a greener alternative to burning fossil fuels.

However, in areas where hydropower is well established there has been a growing backlash against dams due to their extensive impact on the environmental.

According to Dr John Waldman, an aquatic conservation biologist from the City University of New York who led the new study, many environmentalists have come to see dams as “blood clots in our watersheds” owing to the “tremendous harm” they have done to ecosystems.

He says the “poster children” for this effect are migratory fish, such as salmon and shad, whose numbers have declined by several orders of magnitude in some regions due to their migration paths being blocked.

Dams can also lead to declines in local biodiversity, trapped sediments and changes in river temperature as water sitting in reservoirs warms up.

They can even become sources of emissions, as flooding great areas of land leads to microbes living in the water pumping out methane and other greenhouse gases.

Responding to these issues, over 1,000 US dams have been dismantled in the past three decades, and scientists have noted marked improvements as a result.

Dr Jeff Opperman, WWF’s global led scientist for freshwater, tells Carbon Brief dam removal is “one of the most effective ways” to address the “dramatic decline” in freshwater species. Since the removal of the Edwards Dam on Maine’s Kennebec River 20 years ago, for example, numbers of spawning river herring have increased nearly a hundred-fold.

The hydro dams removed so far have made relatively small contributions to the nation’s overall electricity mix, but if larger dams are scheduled for removal, finding replacements will be vital.

This could be challenging, as hydro dams provide essential grid services. In the US Department of Energy’s Hydropower Vision report, it anticipates the contribution of hydropower to grid planning and operations will actually increase in the future:

“In particular, hydropower’s flexibility to rapidly ramp generation up and down in response to changes in the balance between electrical loads and generators facilitates integration of renewable variable generation, such as wind and solar energy, into the grid.”

But with many of the nation’s older dams becoming less profitable and coming to the end of their lifespans, Waldman says other renewables may be able to replace at least some of this ageing infrastructure, and even provide some of this much-needed stability:

“I think we need to have a new paradigm about restoring rivers, and I think that the advent of really seriously alternative energy sources is one way to accomplish this… I think that’s pretty astonishing and tantalising too, I’m hoping this presents a different mindset for people who think about our energy futures.”

In their “thought experiment”, Waldman and his colleagues used data from the US Army Corps of Engineers’ national inventory of dams to determine how many hectares of industrial-scale photovoltaic (PV) cells would be required to replace the power produced by existing dams.

They calculated that if all of the 2,603 hydro dams in the conterminous US – that is, all states excluding Hawaii and Alaska – were dismantled, the replacement solar panels would only take up 13% of the area covered by their reservoirs.

If half the drained land was covered in industrial-scale solar, the team estimates it could produce nearly three and a half times the power currently generated at those sites.

In some regions, their results were particularly stark. For example, Florida could replace its four hydro dams, which currently take up 26,520 ha, with an area of solar panels roughly the size of New York’s Central Park.

The authors note that they do not consider the costs of installing solar power in their analysis, which are likely to be “highly site specific”.

Waldman says that the overall positive effect of such a shift would be that “we would get our free flowing rivers back”, and that the replacement need not be restricted to one form of renewable energy:

“When you drain a reservoir, you get back a lot of land. You have the opportunity to put solar on part of the reservoir bottom, and maybe even floating solar in some places… because many reservoirs are in valleys, you might be able to put wind power on the ridge lines and you also have the possibility of capturing some of the power of the water using hydrokinetic or diversionary approaches, which allow you to capture some power but don’t block the river.”

However, while condensing down the country’s 4m ha of reservoirs to an area the size of Delaware – the second smallest state in the US – seems an appealing proposal, Waldman acknowledges that for many dams it simply would not be feasible.

Not least, this is because dams frequently provide important additional societal benefits including the supply of drinking water, flood control and recreational activities. Waldman notes:

“Even though I recognise we are never going to take down all 2,603 dams in the US, and switch to this notion, there is a lot of room to push the idea of doing this in selective circumstances.”

However, even if it took up less space, industrial-scale PV generation comes with issues of its own, as it can fragment habitats and lead to biodiversity loss. “By definition, the former reservoir sites will be land along rivers, and that land… is often among the most valuable habitats for wildlife and also often important for recreation,” says Opperman.

Responding to these concerns, the authors point to past research which has suggested that, compared to other forms of power generation, solar power is less harmful. They also note that the power replacement with solar could take place at sites away from the reservoirs.

As for whether other renewables could make up for the shortfall in grid services, the authors say improved battery storage capabilities may be able to provide the flexibility current granted by hydropower.

However, while they say such technologies could make up for the more erratic nature of solar power, they also note that “more research is needed” in this area.

Will Henley, head of communications at the International Hydropower Association, tells Carbon Brief the services provided by hydro dams would not be so easily replaced by solar, and suggests instead a system that incorporates both forms of power generation:

“Rather than replacing hydropower facilities with solar PV, a far more sustainable approach would be to prioritise hydropower modernisation investment which combines the strengths of both technologies. Today solar PV can be installed on the surface, or adjacent to a reservoir, increasing rather than replacing the overall generating capacity.”

Waldman says that while hydro dams do provide critical grid services, the power they supply is not always consistent, and can be impacted by phenomena such as droughts.

Given this, he says an array of alternative renewable technologies could be used to create “energy parks” that tap into existing power lines formerly installed to serve hydro dams and come with “resilience that is not provided by hydro alone”.

Given these perceived opportunities, Waldman says many developing nations are making a “big mistake” embarking on major hydro projects that may disrupt pristine waterways, given their ample solar resources.

In the US, however, Opperman says the issue is largely moot owing to the “huge pool” of ageing and increasingly obsolete dams across the country that are not making significant contributions to the power sector. This means many free-flowing rivers could be restored without addressing the country’s large, important hydropower dams:

“This isn’t to say that we should never consider river restoration and dam removal that would entail a loss of a dam’s benefits of electricity generation or water storage, because the environmental and social gains might be worth it. But obviously, projects with major trade-offs will always be more complicated.”