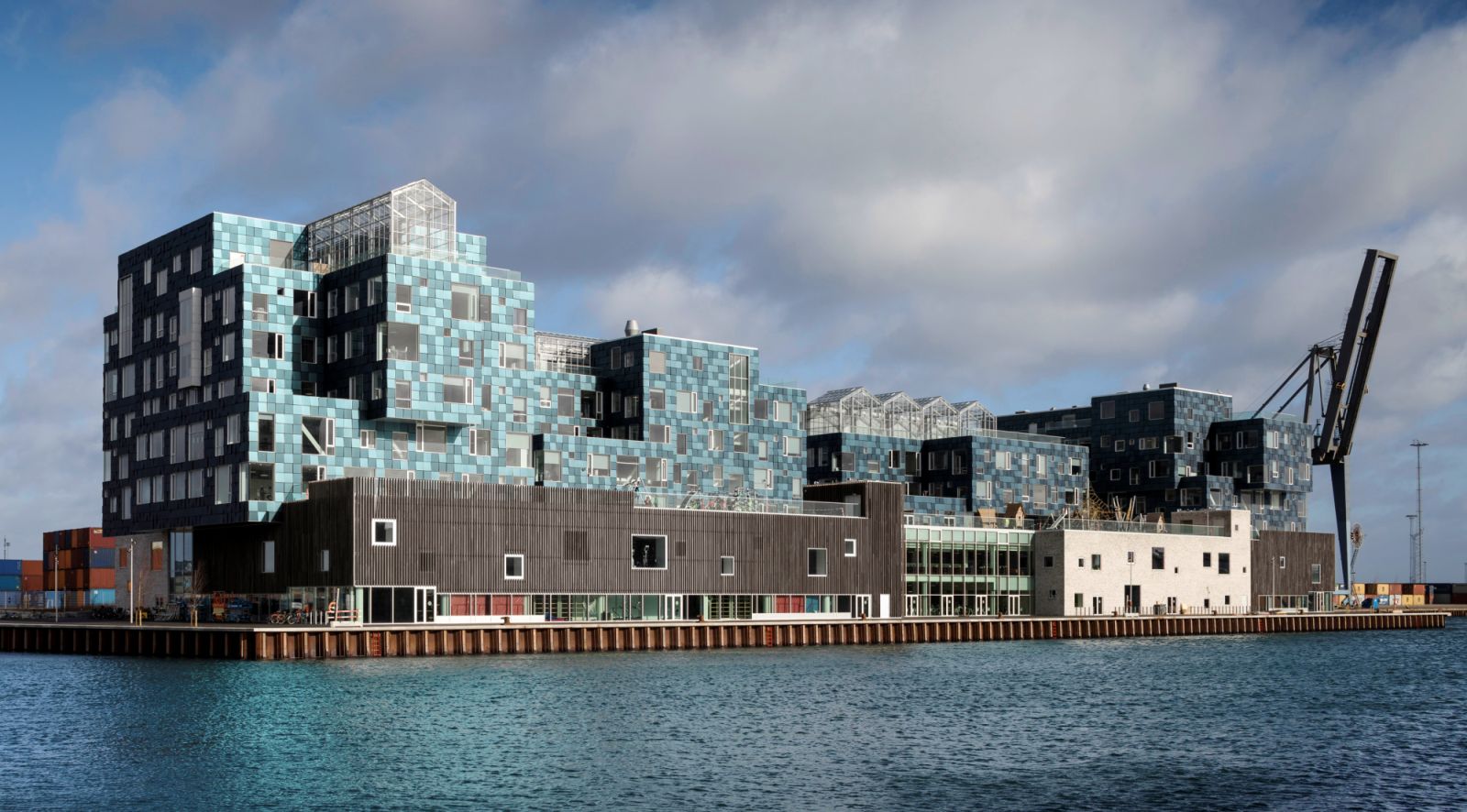 Sea Green is possibly the most soothing calm color of the entire color spectrum. Imagine how wonderful it must be to be encompassed and surrounded by 1,200 sea green solar arrays as a student at C.F. Møller-designed International School Nordhavn in Copenhagen. It is cleantech magic informing the architecture — not only soothing to the eye but refreshing to the student’s mind and body as the solar panels produce clean energy and keep the air cleaner while adding to the building’s aesthetic.

The specific solar technology was developed by Swiss research institute EPFL (École Polytechnique Fédérale de Lausanne). In general, solar technology used as part of the fundamental components of a building is called building-integrated solar PV (BIPV). This is reportedly one of the largest BIPV projects in Denmark.

By a detailed and ingenious process, the tinting of the solar and thermal panels turn the panels into beautiful architectural features in their own right. The shimmering sea-green panels mesmerize the eye. An interesting point is that no pigments were used to make them. The panels are clear. The oceanic sea green color is thanks to technology that adds fine particles to the glass surface. It is the appearance of colored panels that we see. Explaining the process of light interference developed over the years in EPFL labs, Jean-Louis Scartezzini, the head of the Solar Energy and Building Physics Laboratory (LESO-PB) expounds, “The iris effect creates a colorful rainbow on a very thin layer. We used the same principle and adapted for glass.”

An article by EPFL (h/t Inhabitat) adds, “The color comes from a process of light interference developed over a number of years in EPFL labs. Light interference is one way of producing color. It’s a similar effect to that seen in soap bubbles, on the wings of some butterflies, and in a layer of oil on the surface of the water.”

The panels cover much the building. As such, the panels provide the school with 300 MWh of electricity per year, which meets more than half of the school’s energy needs.

“In reality, controlling the light reflected by the solar panels so that they produce only one color without reducing energy efficiency was a real challenge. The researchers aimed to be able to define the color of their solar panels – such as brick red, royal blue, golden yellow or sea green – by ensuring that only certain wavelengths are reflected. This required a series of digital simulations and a special manufacturing process, and it took 12 years to get from the first sample to the first colored solar facade. The researchers developed special filters, which they applied to the glass panels in nanometric layers. The filter design determines which wavelengths of light will be reflected as visible color. The rest of the sunlight is absorbed by the solar panel and converted into energy.”

Andreas Schüler led this project from the start. He provides more details: “We have a free hand in developing our filters – we can achieve specific refraction indexes by combining different oxides. We work layer by layer, using between 3 and 13 layers in any given filter design. We have to find the right composition and thickness of layers so that they reflect the desired wavelengths while at the same time meeting the solar power requirements.

“Making evenly colored samples was difficult. A discrepancy of only 5 nanometers would affect the color. We thus had to achieve nanometric precision at a scale of a square meter.”

There were problems such as the size of the machines. They had to be at least 100 meters (330 feet) long in order to apply the layers of the filter. “We looked for partners in Europe, but companies here weren’t willing to take the chance. It turned out that Emirates Glass had the factory, the machines and the desire to take on this project,” said Nicolas Jolissaint, an engineer at SwissINSO, an EPFL spin-off. Emirates Insolaire was set up as a joint venture and is thus the entity that ended up producing the colored panels for the Copenhagen International School.

As seen in the beautiful photographs via Adam Mork, the color of the panels is something else and brilliantly match the color of the sea at times. Topping 6,000 square meters of the facade are the real-life magic of solar panels that appear as if they are sea glass–hued photovoltaics.