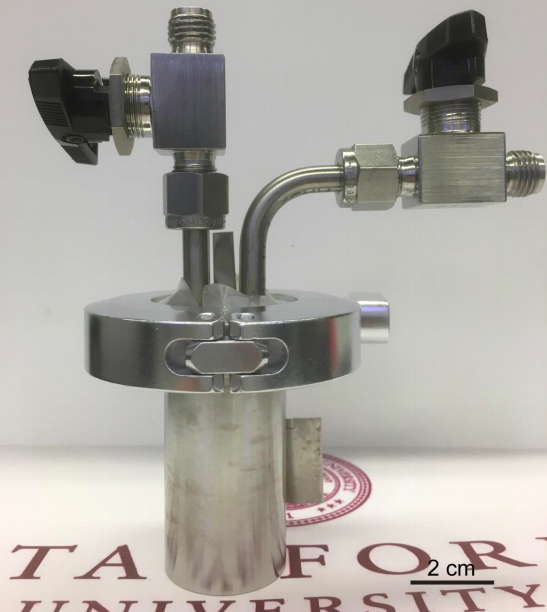 Substitute out some of the platinum catalyst, and the battery gets much cheaper.

Battery technology is extremely important for a world that uses more and more renewable energy. Renewable energy is variable—no electricity can be produced while the sun isn’t shining and the wind isn’t blowing—so being able to store excess electricity that’s made when those renewable sources are producing is key to putting more of it on the grid.

The problem is that very large batteries can be expensive. A lot of research has been devoted to making batteries lighter and smaller, given how focused we’ve been over the last several decades on consumer technology. But now, researchers are relaxing size and weight constraints and trying to find battery chemistries that are cheap and extremely long-lasting instead.

Researchers from Stanford and the Georgia Institute of Technology (GT) are suggesting a new configuration of a nickel-hydrogen battery that could be cheap enough for mass-adoption on the grid. Traditional nickel-hydrogen batteries can last for up to 30,000 cycles and are extremely reliable and durable, which makes them great for grid use. But they often rely on a platinum catalyst that can make them prohibitively expensive for large installations.

In the new work, the researchers substituted out the platinum that would have been part of a nickel-hydrogen battery and replaced it with a “bifunctional nickel-molybdenum-cobalt electrocatalyst as hydrogen anode.” The estimated cost of a full-scale version of this battery is about $83 per kilowatt-hour, below the Department of Energy’s 2040 goal for $100/kWh target for grid-connected storage. For context, last year Tesla appeared to offer a record-low price for its lithium-ion battery installation at the Hornsdale wind farm in Australia at $250/kWh.

The researchers began their work by building a manganese-hydrogen battery, which stores energy by splitting water and producing hydrogen in a reversible reaction. They eventually substituted out the manganese for a nickel-dominant cathode that achieved a superior 35 milliamp-hours (mAh) per square centimeter. They included the nickel-molybdenum-cobalt electrocatalyst to bring down the cost of the battery, and with a wet electrolyte (a potassium hydroxide solution), the battery had an energy density of approximately 140 watt-hours per kilogram. The researchers did not observe any capacity decay over 1,500 cycles.

The battery prototype is housed in a cylindrical container, with the cathode and the anode rolled up “similar to the fabrication of commercial AA batteries,” the paper notes.

The researchers also tried to charge the battery under different current densities. Sometimes high currents can cause a battery to lose discharge capacity permanently, but this nickel-hydrogen battery seemed to hold up well until the higher range of currents was applied, and then Coulombic efficiencies decreased slightly.

Of course, this battery is just a prototype, albeit one that shows promise. The researchers hope to refine their system and explore ways to further lower the cost of this next-generation rechargeable grid battery. But achieving $83 per kWh would be a significant step forward for grid-scale storage.