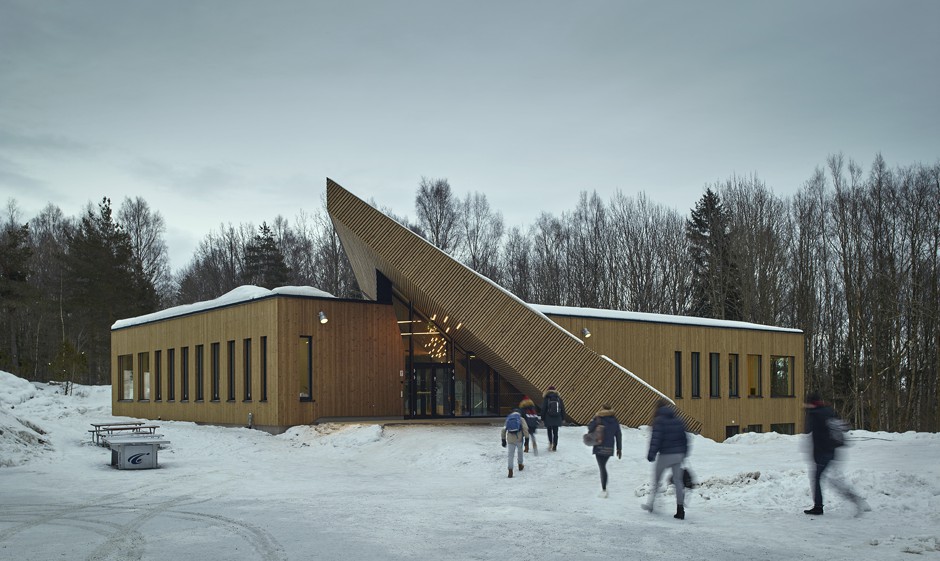 The European Union has a target of making all new buildings zero-energy by 2020, but in Norway, carbon neutrality isn’t enough.

A consortium in Oslo made up of architects, engineers, environmentalists, and designers is creating energy-positive buildings in a country with some of the coldest and darkest winters on Earth. “If you can make it in Norway, you can make it anywhere,” says Peter Bernhard, a consultant with Asplan Viak, one of the Powerhouse alliance members.

Bernhard says Powerhouse began in 2010 with a question: Is it possible to not only eliminate the carbon footprint of buildings, but also use them as a climate-crisis solution? It was a lofty goal. According to the European Commission, buildings account for 40 percent of energy usage and 36 percent of CO2 emissions in the EU.

But after undertaking several energy-positive projects—building a new Montessori school, retrofitting four small office buildings, building a few homes, and breaking ground on two new office buildings—Powerhouse has found the answer to the 2010 question to be an emphatic “yes.”

In 2019, the collective’s biggest project to date will be opened to the public: Powerhouse Brattørkaia, in the central Norwegian city of Trondheim.

Brattørkaia is an eight-story office building that will produce 485,000 kWh annually. For reference, the average Norwegian home uses about 20,000 kWh of power a year. (In the U.S., the yearly household average is 10,399 kWh). Brattørkaia will, in effect, become a mini-power plant that can supply electricity to Norway’s publicly owned grid.

Its surplus energy will also compensate for the power used to produce its building materials. That, says Snøhetta architect Jette Hopp, is unique; prevailing definitions for energy-positive buildings don’t include materials’ embodied energy.

Hopp says accounting for that energy makes for a more complex development process. Recycled materials are favored above all. New materials are diligently traced. The design process is front-loaded with engineering expertise. Alliance members work together to make sure every design choice has a dual purpose. “Nothing is by coincidence,” says Hopp.

“We try to give things multiple functions, and that directly leads to less embodied energy since we don’t have to double or triple up systems. That’s in the smart thinking—but you need to have the knowledge of all the different layers of infrastructure works in order to find synergies.”

A tour of the first-built Powerhouse

That meticulousness is apparent at Powerhouse Kjørbo. The retrofit project, composed of four short office buildings in a business park outside of Oslo, was the first to be completed by the collective. During September’s Oslo Innovation Week, Bernhard of Asplan Viak—whose offices are located at Kjørbo—gave a detailed tour of one of the buildings.

The building concrete frame was recycled, and the old exterior glass windows were reused to make interior partitions, which help maximize daylight. Additional insulation panels were made from old plastic bottles. Rather than use energy-intensive metal, a Japanese wood-burning technique called “shou sugi ban” was used to blacken Kjørbo’s new façade.

Prior to refurbishment, the building consumed an average of 250 kWh per square meter, says Bernhard. “That has been reduced by 85 percent.” Kjørbo’s excess energy is used to heat another building and power a nearby hydrogen-car refuelling station.

The hope is to make energy-positive neighborhoods next, says Bernhard.

Energy-positive construction has piqued other countries’ curiosity—particularly Germany’s—but it still hasn’t had its breakthrough moment. Hopp says that so far all of Powerhouse’s requests have comes from inside of Norway.

Snøhetta on its own, however, has an international reputation for pairing elements of sustainability—social or environmental—with bold yet rational design. In 2018, the architecture firm finished the retrofit of an old house on Harvard’s Cambridge campus which will serve as a prototype and living laboratory for energy-positive construction. The firm also built the extension of the San Francisco Museum of Modern Art, the pedestrianized revamp of Times Square, Calgary’s new Central Library, Le Monde’s new Paris headquarters, and a building in Toronto entirely dedicated to giving Ryerson University students badly needed study space.

Back in Norway, Snøhetta and other Powerhouse members are working on the world’s first energy-positive hotel inside of the Arctic circle. The mock-up for the Svart hotel shows a ring-shaped building jutting out over icy waters, just a few steps away from the Svartisen glacier.

In Trondheim, the design of the not-yet-finished Brattørkaia shows a striking building informed by nature. The roof slopes to maximize solar harvesting. A cylindrical atrium through the center of the building brings natural light in from two sides. A slightly curved façade, paired with double-skin glass, captures Nordic winds and repurposes them for ventilation while also reducing the wind-tunnel effect on the ground. “We really let the environmental aspects drive the design,” says Hopp.

The commitment to social and environmental sustainability is not unique to Powerhouse. Norway is wholly dedicated to reducing CO2 emissions across the country, with the ultimate goal of de-carbonizing transportationaltogether. For these efforts, Oslo was elected the 2019 European Green Capital. Powerhouse isn’t the only group dedicated to energy-positive construction; Haptic Architects and Nordic Office of Architecture areplanning an energy-positive airport city for Oslo.

Hopp suggests this kind of environment-focused collectivism is partly informed by Norway’s right to roam, a right codified by law that gives all Norwegians the freedom to pitch a tent almost anywhere they want.

Hopp says Snøhetta has integrated a version of the right to roam—being able to freely walk in, under, or upon a building as a member of the general public—into their work. “We believe that architecture is one of the most important cultural expressions of our time, and that it also has a social impact,” she says.

“When you have a generous building that is also able to include society, that changes how you perceive cities and the built environment around you—the singular ‘you’ as well as the plural. It makes a big difference.”