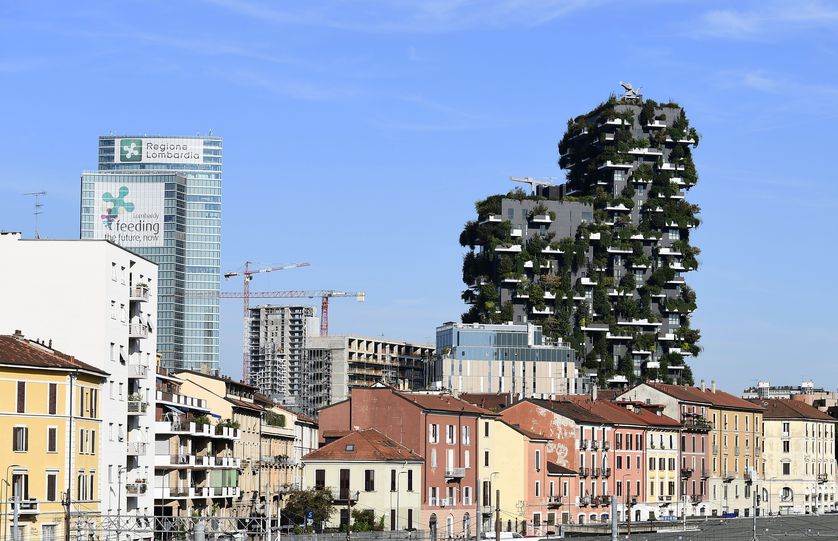 The most attention-grabbing 21st-century addition to Milan’s skyline is arguably Bosco Verticale.

This is quite the accomplishment, as it takes a lot for heads to swivel in Italy’s second-largest city. A hotbed of high fashion and cutting-edge design, this alta moda town is obsessed with presentation — verve, style, something that takes risks to stand out above the rest. Bosco Verticale, which was completed in 2014 after enduring five years of skepticism, fits the bill.

Part of a larger urban redevelopment project, Bosco Verticale (or “Vertical Forest”) is not one but two adjacent buildings: twin residential high-rises — one slightly taller than the other — situated on the edge of the trendy, previously blue-collar Isola district. In a sight that’s both futuristic and fairy tale-esque, the boxy modernist towers’ exteriors are clad top to bottom with a variety of flora including over 800 trees, 4,500 shrubs and 15,000 perennials. Per architect Stefano Boeri, if the total amount of vegetation covering the tower facades were to be spread out across flat terrain, it would equal 20,000 square meters of forest.

The purpose of having a massive amount of greenery stuffed the towers’ gigantic concrete balconies is manifold: to promote biodiversity, reduce the urban heat island effect, filter air pollution, absorb carbon dioxide, naturally regulate the buildings’ interior temperature and of course, beautify and improve the quality of life in a city that’s defining color is usually a gritty, smog-layered gray.

For Boeri, Bosco Verticale isn’t just a plant-bedecked one-off that no one thought could ever happen and did. It’s a comprehensive framework for sustainable urban building, one that his eponymous firm is working to replicate in other cities. As Boeri puts it, Bosco Verticale is a “model for vertical densification of nature within the city that operates in relation to policies for reforestation and naturalization of large urban and metropolitan borders.” The towers in Milan serve as a prototype for this model.

Officials in Milan have embraced Boeri’s concept of habitable green space that spreads up instead of out. They do realize, however, there’s more work to be done when addressing the city’s myriad environmental ills — Milan frequently ranks as having among the poorest air quality of any European city alongside Turin and Naples — and not necessarily in a vertical fashion.

To address this, Milan intends to plant 3 million new trees across the city by 2030.

Currently, Milan’s urban canopy constitutes 7 percent of the city’s total land area. This is a markedly low figure, even lower than that of (similarly air pollution-riddled) Paris. As Colleen Barry reports for the Associated Press, officials are optimistic that trees will cover between 17 and 20 percent of the city in just a little over a decade.

“It is one of the most effective ways we have to fight climate change, because it is like fighting the enemy on its own field,” Boeri tells the AP of Milan’s urban forestation ambitions. “It is effective and it is also democratic, because everyone can plant trees.”

Expanding a canopy and curbing emissions

When said and done, it’s believed that Milan’s tree-planting spree will increase the total number of trees in the metro area by 30 percent while capturing an additional 5 million tons of CO2 each year. At the same time, officials estimate that an influx of new trees would eliminate 3,000 tons of health-compromising airborne particulate matter over the span of a decade and help to drop temperatures within the heart of the increasingly sweltering city by up to 2 degrees Celsius.

As Damiano Di Simine, scientific coordinator for Italian environmental group Legambiente, elaborates to the AP, it’s that last aspect — mitigating the the urban heat island effect — that could have the most dramatic impact. Presently, nighttime temperatures in Milan can be as much as 6 degrees Celsius (10.8 degrees Fahrenheit) higher than in outlying areas in the Lombardy region.

Di Simine explains that Milan’s geographic location in the northwest of the Po Valley near the foothills of the Alps is one that experiences minimal wind. This means polluted air is infrequently cleared out and mugginess can prevail for uncomfortably long stretches.

“The lack of wind also accentuates the urban heating,” Di Simine said. ”It means the discomfort from thermic inversions is terrible, because the climate is very stationary. Planting trees will help this.”

To more effectively counter the impacts of a changing climate, Milan can’t just rely on trees to do all of the heavy lifting. This is especially true when it comes to limiting vehicle emissions.

Although the city of 1.3 million people has a robust public transit network that includes a metro system, light rail and an extensive number of tram lines, at the end of the day it remains a car-centric town with a high rate of automobile ownership per capita, a large number of daily commuters and notorious traffic congestion.

If Milan — even a Milan blessed with millions of new trees — truly wants to be a greener, cleaner city, something needs to give. And things are finally giving.

In recent years, officials have made efforts to reduce the number of cars on the road by taking advantage of the city’s flat topography and expanding cycling infrastructure.

Like other European cities struggling with air pollution, in the past Milan has placed temporary bans on driving during periods of dangerously poor air quality as well as offered reduced transit fares. In early 2019, Milan will begin to gradually limit diesel vehicles from operating within city limits, starting with older, exhaust-spewing diesel models (which there’s still a huge number of in northern Italy.) Starting in 2024, all diesel vehicles will be prohibited from the city center.

Given that bustling and built-up Milan has scant available land to spare for large-scale reforestation projects, the addition of 3 million new trees will be dealt with in several ways — some more creative than others.

Per the AP, there are early plans to transform several disused rail yards into a proposed network of newfangled public green spaces, a project that could see 25,000 new trees added to Milan’s urban landscape every year. There are also plans to enact an extensive green roof initiative for new and existing buildings as well as a scheme to plant thousands of trees in asphalt-laden schoolyards. (A similar scheme is underway in Paris, and not without controversy.)

One completed and particularly eye-catching urban green space project that just happens to be located within close proximity to Bosco Verticale is Biblioteca degli Alberi (“Library of Trees”). This lush 24-acre swath of parkland (the third largest in central Milan) boasts a whole lot of trees and ample new recreational opportunities.

Milan’s Library of Trees is finally open https://t.co/svt4hEn0gQ via @lptravelnews

It’s unclear if Boeri — the man who brought green to Milan in a most unorthodox way — plans to erect more vegetation-shrouded apartment towers in the city as a means of helping officials reach the magic number of 3 million new trees by 2030. There are, however, Bosco Verticale-esque towers designed by Boeri that have been proposed for or are in the works in other cities including Paris, Nanjing, China; Lausanne, Switzerland and the Dutch cities of Eindhoven and Utrecht.

Perhaps more importantly, Boeri has inspired other architects to dress their designs in greenery as a way to keep cities cool and clean while promoting housing density.

“For sure we didn’t copyright it because we think there are and could be many other architects that can do better than us,” Boeri explained at the Cities For Tomorrow conference held earlier this month in New Orleans.

As The Times-Picayune reports, Boeri’s “jam-packed” presentation at the conference served as a primer on the benefits of erecting tall, plant-covered buildings. Boeri, who collaborates closely with horticulturists, notes that plant selection is always the first step. “So we in a way design and build houses for trees,” he said.

The concrete (and other) concern(s)

Tall buildings designed to accommodate sizable trees and massive amounts of vegetation have elicited questions of feasibility and sustainability from the start.

Such is the case with plans to build a 27-story condo tower in downtown Toronto that would hold roughly 500 trees on the structure’s substantially sized terraces. In its early stages, the proposed building, designed by local firm Brisbin Brook Beynon Architects, has enjoyed considerable support from residents. And this isn’t surprising — the greenery-cloaked high-rise would be visually striking, beneficial to the environment and help Mayor John Tory achieve his canopy expansion plans within the city. (He’s aiming for 40 percent coverage.)

“People who live in these buildings feel a connection to nature,” architect Brian Brisbin tells U.S. News & World Report. “Being surrounded by trees in an oxygen-producing environment has a dramatic effect on overall wellness and happiness.”

Lloyd Alter, a Toronto resident who also happens to be MNN’s resident boomer authority and design editor of sister site TreeHugger, has qualms.

Alter explains that vertical forest-style buildings require a great deal more CO2-intensive concrete than conventional high-rises as it’s needed for the bulky, steel-reinforced terraces that must support the added weight of trees and plants and soil. “It would take a hundred years for the trees in one of these structures to compensate for the carbon footprint the building creates,” he tells U.S. News & World Report.

And even when properly selected and cared for, others have voiced concern about the ability of trees to thrive when faced with new environmental stressors associated with being planted way high above the ground.

Back in Milan, Bosco Verticale, while less than 5 years old, is thriving. Some critics have even warmed up. If anything, this smoggy city is fortunate to have two tree-studded beacons leading the way as it starts to aggressively expand its canopy.