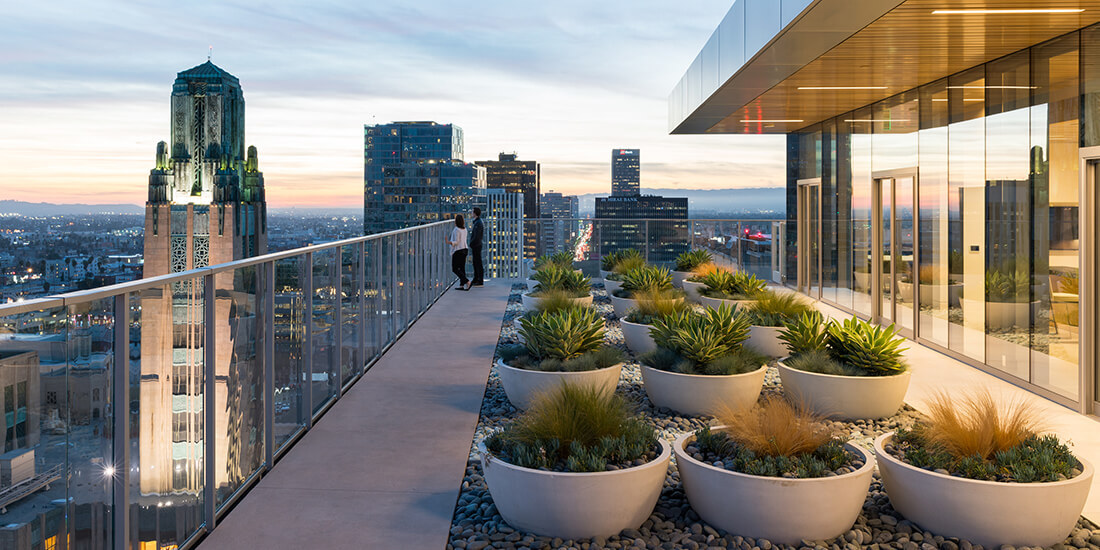 Life On High: the Renaissance of Rooftop Spaces is Here to Stay

Though seemingly opposite environments, cities are a lot like rainforests. At ground level, the world is dank, dark, and full of predators. Inhabitants seeking fresh air, sunshine, and privacy have only one direction to go: up.

So in the urban jungle, it’s only natural to build a “canopy” in the form of rooftop architecture. The popularity of rooftop amenities across residential, commercial, hospitality, and even health-care projects shows that’s exactly what’s happening.

According to Nathan Wilcox, principal at Austin, Texas–based architecture firm Sixthriver, the current obsession with rooftops began in the early aughts, when the US Green Building Council’s Leadership in Energy and Environmental Design (LEED) rating system brought sustainability to the forefront for architects, developers, owners, and regulators. In 2002, the City of Chicago passed an ordinance making green or reflective roofing compulsory for new and refurbished roofs. Thereafter, green roofs flourished.

There was just one problem: Early versions of green roofs helped the planet more than people. “Instead of a giant lawn covered with seed that you can’t walk on without crushing, people want to be able to sit at tables, walk around on pavers, and just generally use the space and enjoy it,” Wilcox says. “That first generation of green roofs just wasn’t set up for that.”

Developers in cities that have run out of horizontal space must optimize vertical space—while maximizing revenue. That means infusing buildings with Instagrammable aspects that attract tenants and visitors without cannibalizing leasable square footage.

“It’s an economic model,” says architect Simon Ha, a partner at Los Angeles–based architecture firm Steinberg Hart. His hotel clients have been especially bullish on rooftop amenities, which attract guests and locals without sacrificing interior space. “My clients want something that’s going to set them apart,” he says. “The rooftop definitely does that, and they make a ton of money because of it.”

Clients love rooftops because of the competitive advantage. Occupants love the view. “From one of our buildings [in Los Angeles], you can see all the way to the ocean, the Hollywood sign, the Santa Monica Mountains, and downtown. You can’t get that kind of vantage point without going onto the roof,” says Ha, whose firm’s projects include the multi-use 3033 Wilshire tower in Los Angeles. “There’s just something about being up high. It fills you with a sense of belonging to something bigger.”

Architects must design rooftops in a way that exploits instead of arrests that feeling, says Kevin Valk, partner and design director at architecture firm Holst, based in Portland, Oregon. Holst designed the LL Hawkins, a 125,000-square-foot LEED Gold apartment building in Portland, and The Fowler, a 204,000-square-foot apartment building (also anticipating LEED Gold) in Boise, Idaho.

When he designs rooftops, he uses drone photography to convey the view, then builds his design around it. On a rooftop pool, for example, a glass guardrail can provide safety without compromising the scenery.

“If somebody is lounging on a recliner, can they still see what you want them to see? You try to create as much visibility as you can,” Valk says.

San Francisco’s new 5.4-acre Salesforce Park embodies the best of rooftop design. Located atop the new Salesforce Transit Center, which opened in August, it features 13 gardens, a central lawn with trees and a picnic meadow, movable chairs and tables, an 800-seat amphitheater, a half-mile walking path, and a restaurant. Details such as outward-facing, single-person benches—where downtown workers can de-stress during quiet moments overlooking the city—indicate thoughtful design of PWP Landscape Architecture.

“What people really like about the park is that it gives them a new perspective on the city,” says Ashley Langworthy, director of the San Francisco office of Biederman Redevelopment Ventures, which manages and operates Salesforce Park. “It feels separate from the streets and the traffic and the horn-beeping. In that sense, it’s an urban oasis.”

Of course, oases don’t come easy. To create them, architects must contend with challenges that are inherent in rooftop environments. “The number one design consideration is solar orientation,” Wilcox says. “Setting your site up so that your building doesn’t block the sun from the deck is ‘Roof Terrace Design 101.’”

Rooftops’ altitude and exposure also make them magnets for heat. “We try to use very light materials to keep the heat load off the roof,” says architect Kricket Snow, an associate principal at Perkins+Will Miami. The firm recently designed a green rooftop for Baptist Health South Florida, a new outpatient facility with a wellness center that uses the rooftop for physical therapy and yoga classes.

Designed with Autodesk Revit, the rooftop features light-color pavers to repel heat and shade trees to provide refuge from it. “In Miami we have some pretty serious heat to contend with, so shade is a big deal for us,” Snow says. “In addition to specifying trees that will provide shade when they grow in, we have a canopy that rims the perimeter of the building; during certain times of day it will cast shadows onto the rooftop.”

Because of wind velocity and hurricane threat, the pavers on Baptist Health’s green roof had to be secured using special clips that keep them from becoming airborne, according to Snow. Roof elements of all sorts—including trellises, awnings, and furniture—must be considered. Water removal is always a major concern, says Snow, who sloped the facility’s roof to assist with drainage and used a pedestal paver system to create a level surface for wellness programming.

Architects must consider the extra weight of roof-decks, and they must creatively conceal obtrusive mechanical equipment that typically resides on rooftops. At Baptist Health, for example, Perkins+Will placed the mechanical equipment a level below the rooftop deck, completely hidden from view. At Salesforce Park, designers created mounded, vegetated “hills” to disguise elevator and venting shafts. And finally, local building codes dictate safety features such as guardrails, egress requirements, and occupancy limits, all of which place design constraints on architects.

Probably not, but that won’t stop them from being built. “Ten years from now I think rooftops will probably be dialed back a little bit, but I don’t think they’re going away,” Wilcox says. “Our planet is only going to get more and more full, so we’ll need to continue maximizing all of the surface area in developments. Plus, there’s a ‘wow’ factor. These spaces are just really cool.”