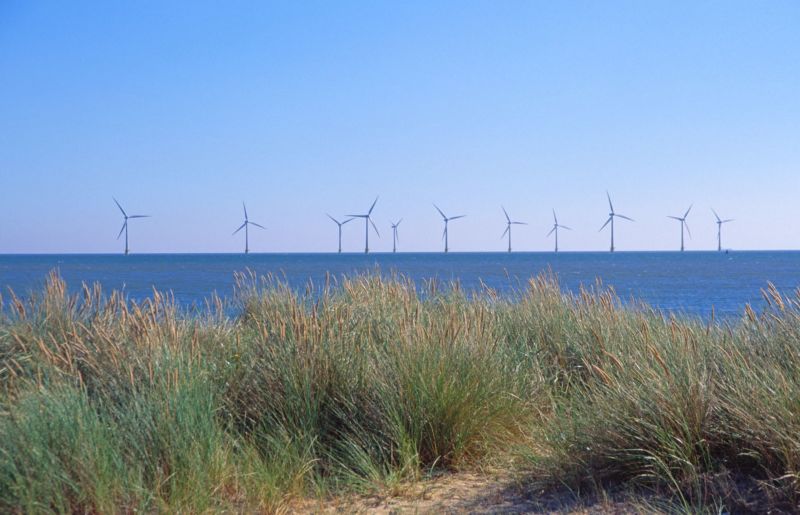 This week, the executive director of the International Energy Agency (IEA) told the Global Wind Summit that wind energy was likely to become Europe’s dominant energy source by 2027 and that it would grow from there.

But by 2027, IEA’s forecasts (PDF) put wind just beating all other electricity sources with a 23-percent share of the energy mix. “Other Renewables” like biomass plants contribute a little over 20 percent, gas adds 20 percent, nuclear contributes just a little below 20 percent, and coal declines to just over 10 percent. Solar energy contributes about six or seven percent in the IEA’s 2027 scenario.

The European Union has a wealth of wind energy, especially offshore wind energy, a sector in which the EU is the global leader. Offshore wind allows turbines to be built bigger, and coastal winds are often stronger and more consistent than onshore winds. In 2017, Europe had 15,780 megawatts (MW) of offshore wind capacity, according to Wind Europe. In a slide shared by the IEA this week, the agency forecasts that capacity number to grow to nearly 200 gigawatts (GW) by 2040.

GreenTechMedia notes that it’s unclear how the IEA’s forecast numbers would be affected by Britain exiting from the European Union. The United Kingdom is currently a major contributor to the EU’s overall offshore wind numbers, although some ambitious projects have been proposed for the North Sea.

In a significantly wind-heavy scenario, the IEA believes that “ongoing cost declines” for wind could “open prospects for the production of ‘green’ hydrogen.” Currently, hydrogen is mostly produced via natural gas reforming, so it’s not a carbon-neutral fuel. But abundant electricity from wind power, especially at night when demand for electricity in general is low, could be used to stimulate water electrolysis, a process that could make green hydrogen.

That leads to another argument the IEA made this week in Europe: electricity generation is only one part of a three-piece puzzle. “Decarbonization efforts are disproportionally focused on the power sector… and not enough on heat and transport,” the IEA’s slides said. The agency noted that the electricity sector in the EU “accounts for just 20 percent of energy use.”

Decarbonization of the transportation sector is difficult, because transportation is decentralized, and widespread electric vehicle adoption requires political will for subsidies and tax breaks. But green hydrogen could help the EU reach its decarbonization goals. Last week, Germany put its first hydrogen-powered train on the tracks, and the French manufacturer of that train said more are coming.

Can that much wind work?

IEA splits nations up into phases that describe how much wind and solar integration that nation has been able to incorporate. The concern, here, is that wind and solar are variable, so if you get extended periods of no wind or sun, significant amounts of wind and solar together could cause instability on the grid.

Phase 1 and Phase 2 countries have little enough wind and solar on their grid that no extra interventions are really needed to make the grid work. (The US is a Phase 2 country, according to the IEA.) Phase 3 countries like the UK, Italy, and Germany have enough wind and solar that they need to start making investments in battery storage, flexible power plants, demand-side management solutions like setting different prices for energy at peak periods and advanced grid technology. Phase 4 countries like Ireland and Denmark have so much wind that they will require “advanced technologies to ensure grid reliability,” the IEA says.

The bottom line, according to the energy agency, is that adding more renewables is just half the story. “As shares of variable renewables rise, more flexible power systems and appropriate market design will be needed for reliable and cost-effective system integration.”