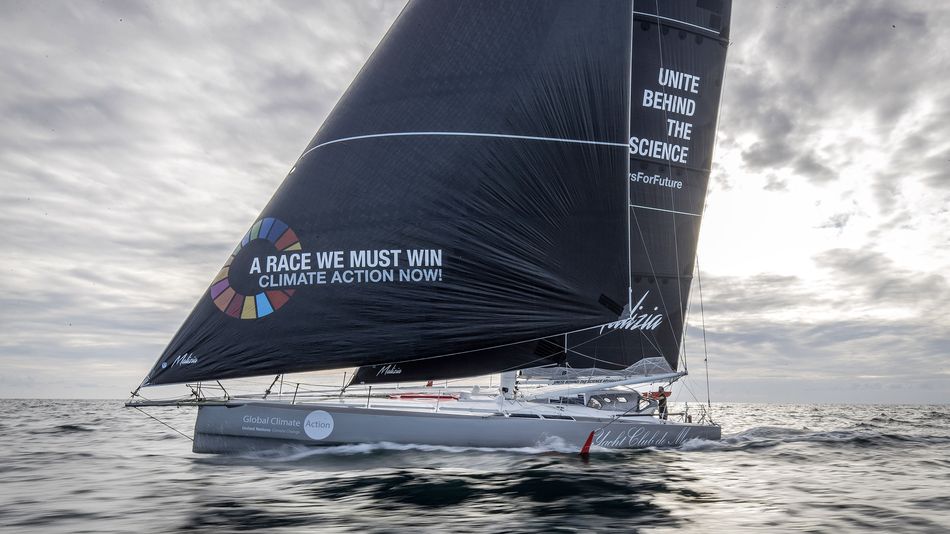 Earth’s skyrocketing CO2 levels are now rising at rates that are unprecedented in both the historic and geologic record.

Already, levels of the potent heat-trapping gas are the highest they’ve been in at least 800,000 years, but more likely millions of years. Acknowledging that airliners emit prodigious amounts of carbon dioxide, Swedish climate activist Greta Thunberg announced Monday that she will journey across the Atlantic Ocean to speak at the U.N. Climate Action Summit upon a technologically-advanced sailboat, the Malizia II.

But Thunberg won’t stop there. She’ll continue on to a crucial U.N. climate conference in Chile.

“Good news!,” she tweeted Monday. “I’ll be joining the U.N. Climate Action Summit in New York, COP25 in Santiago and other events along the way. I’ve been offered a ride on the 60ft racing boat Malizia II. We’ll be sailing across the Atlantic Ocean from the UK to NYC in mid August.”

“The science is clear,” Thunberg added in a statement. “We must start bending the emissions curve steeply downwards no later than 2020, if we still are to have a chance of staying below a 1.5 [Celsius] degrees of global temperature rise.”

Curbing Earth’s accelerated warming this century to 1.5 C (or 2.7 degrees Fahrenheit) above temperatures in the late 1800s is not just considered ambitious. It’s now almost unfeasible, according to researchers who study Earth’s carbon budget. The worlds four biggest carbon emitters — the U.S., China, the EU, and India — would all need to start slashing their carbon levels immediately, while the rest of the increasingly industrialized world would need to completely eliminate carbon emissions by 2030.

Climate scientists have determined that reining in Earth’s warming at 1.5 C (or even 2 C) above pre-industrial levels will avoid the worst consequences of climate change. That’s why many researchers argue that radically reducing carbon emissions is still a fundamental goal, regardless of the challenges of meeting a specific, or immensely ambitious target, like 1.5 C.

“The best time to start [reducing emissions] was 25 years ago. The second best time is today,” tweeted Gavin Schmidt, the director of the NASA Goddard Institute for Space Studies, after the U.N. released its special report on meeting the 1.5 C climate target in 2018.

Meeting this goal will be a Herculean task. “Limiting warming to 1.5 C is possible within the laws of chemistry and physics but doing so would require unprecedented changes,” Jim Skea, an author of the report, said in a statement.

The airline industry makes up a significant part of the planet’s growing CO2 problem. In the U.S. alone, aircraft are responsible for 12 percent of the nation’s transportation emissions. Internationally, airliners contribute over 2 percent of total global carbon emissions — more than most nations in the world.

“Someone flying from London to New York and back generates roughly the same level of emissions as the average person in the EU does by heating their home for a whole year,” the European Commission notes.

But many researchers aren’t promoting that everyone stop traveling. That’s not realistic. Rather, many climate and carbon budget experts have consistently promoted more domestic travel to cut down on carbon emissions.

The international aviation industry does not yet have a plan in place to slash carbon emissions. “Right now, polluting is basically free,” Dan Rutherford, the International Council on Clean Transportation’s program director for marine and aviation, told Mashable last year. Airline engineers and plane historians don’t expect airliners to change that much in the next quarter century or so.

fter record airline passenger growth in 2018, the president of the Germain airline Lufthansa, Carsten Spohr, noted that there is “no Greta-effect” on airline travel, and that growth is expected again this year. “People want to fly,” he told the Swiss newspaper NZZ am Sonntag.

The boat Thunberg will soon travel upon, the Malizia II, is a sleek racing vessel outfitted with “solar panels and underwater turbines to generate electricity on board the vessel,” according to Boris Herrmann Racing, which operates boat. Traveling such a long distance by sea is certainly a “challenging” mode of transport, acknowledged Pierre Casiraghi, who will co-captain the journey. Extreme weather could make the low-carbon trip all the more arduous: August and September are peak Atlantic hurricane season.