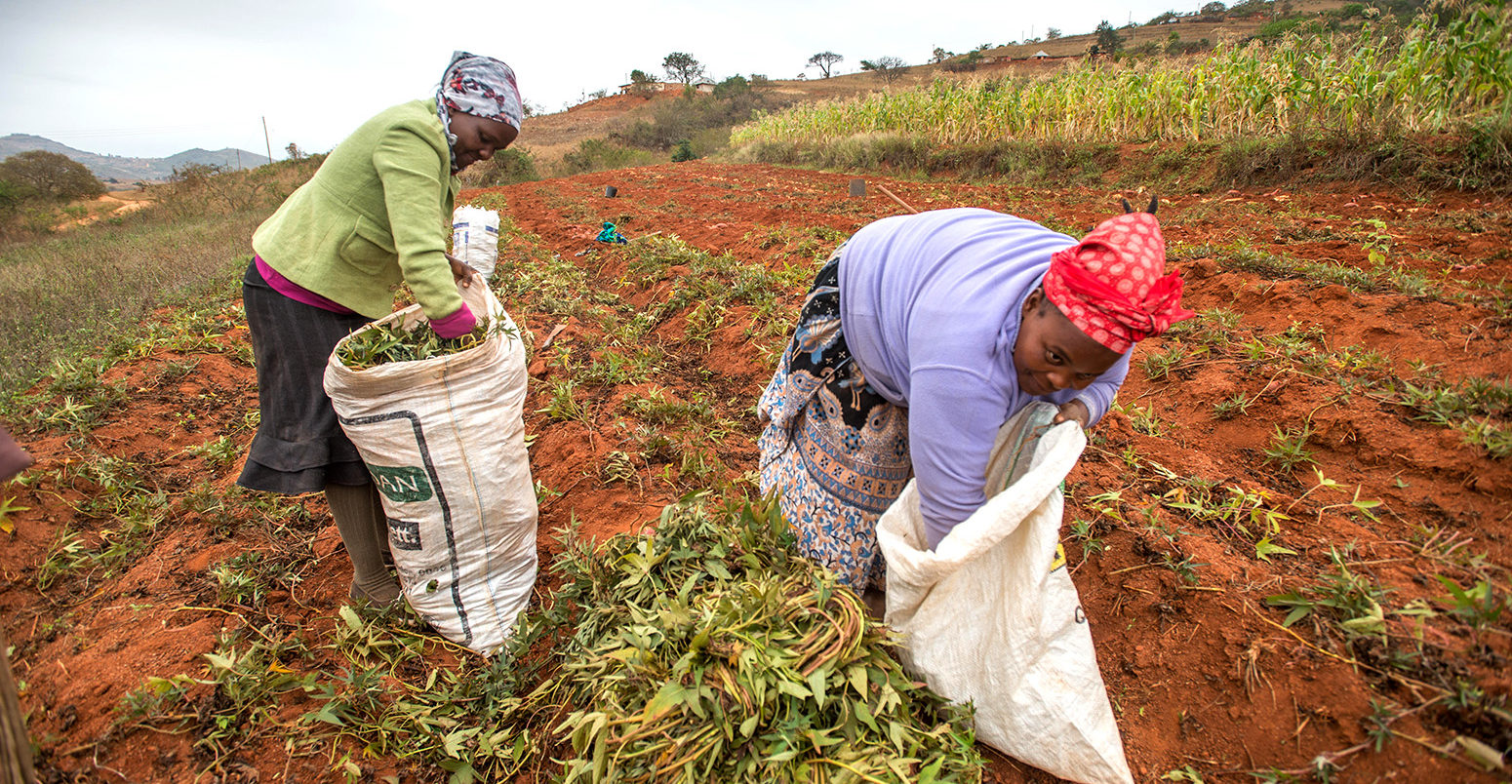 Global carbon tax in isolation could ‘exacerbate food insecurity by 2050’

The implementation of a global tax on greenhouse gas emissions could – without other complementary policies – “have a greater negative impact on global hunger…than the direct impacts of climate change”, a new study says.

The research finds that using a blanket “carbon tax” to restrict global warming to 2C above pre-industrial levels – which is the limit set by the Paris Agreement – would put an additional 45 million people at risk of hunger by 2050.

However, the results “should not be interpreted to downplay the importance of future GHG [greenhouse gas] emissions mitigation efforts, or to suggest that climate policy will cause more harm than good”, the scientists say.

Instead, the findings should highlight the need for “complementary policies” that would “counteract the impacts of the climate change mitigation policies on vulnerable regions”, they add.

Delaying climate mitigation would be “self-destructive” because, over time, the proportion of people affected by climate change is likely to increase, another scientist tells Carbon Brief.

Climate change could threaten global food security by increasing the chance of staple crop failures in many parts of the world, such as across Africa and the US.

Research previously covered by Carbon Brief shows that the impact of climate change on staple foods and fruit could drive up rates of malnutrition in low and middle-income countries.

However, some policies aimed at tackling climate change could also have consequences for world hunger, research shows.

The new study, published in Nature Climate Change, zooms in on how implementing a uniform tax on greenhouse gas emissions from agriculture and other types of land use, in particular, could impact food security worldwide.

The introduction of a carbon tax could threaten food security in three main ways, the researchers say.

First, the tax would raise the cost of food production, especially for carbon-intensive products such as meat.

Second, the tax would raise the costs associated with agriculture expansion, which would lead to higher land rents.

Third, the tax would incentivise the production of biofuels – which would compete with food crops for space, further driving up land rates.

All three of these consequences could drive up food prices, which would be costly for the world’s lowest earners – who spend up to 60-80% of their income on food.

The results show that a blanket carbon tax “would have a greater negative impact on global hunger and food consumption than the direct impacts of climate change”, the scientists say in their research paper. They add:

“These results imply that inclusive carbon taxation aimed at ambitious climate policy could largely exacerbate food insecurity by 2050. Such policies increase food prices, decrease food consumption and put more people at risk of hunger than in a future without these policies.”

Instead, policies that can help slash emissions from agriculture while aiding development should be prioritised, says lead author Dr Tomoko Hasegawa, a researcher at the International Institute for Applied Systems Analysis (IIASA) and Japan’s National Institute for Environment Studies. In a statement, she said:

“Carbon pricing schemes will not bring any viable options for developing countries where there are highly vulnerable populations. Mitigation in agriculture should instead be integrated with development policies.”

For the study, the researchers used a set of models to assess how the effects of climate change and mitigation efforts could impact food security and hunger.

To explore the impacts of climate change, the researchers compared how crop yields would be affected under 2C (RCP2.6) and 2.7C (RCP6.0) of global warming.

To understand the impacts of mitigation efforts, the researchers compared a world where warming is limited to 2C to a world where no efforts to tackle climate change are made before 2050.

The former scenario assumes that the world shifts from a reliance on fossil fuels to low-carbon sources of energy, and that a uniform carbon price is rapidly introduced “across all sectors and regions” and is steadily increased in the coming decades.

(The scenarios use three different “socio-economic pathways” to make assumptions about how factors, such as population growth, are likely to change by 2050.)

In the scenarios without mitigation, the number of people at risk of hunger by 2050 is expected to increase by 5-56 million.

In the scenarios with mitigation, an additional 13-170 million people could face hunger. The increase in those at risk is expected to be largest in sub-Saharan Africa and parts of South Asia, including India and Bangladesh.

The charts below show the expected changes in the number of people at risk of hunger (left) and the number of calories consumed per person per day (right) by 2050 under the mitigation (RCP2.6) and “no-mitigation” (RCP6.0) scenarios.

On the charts, green shows the average effect of climate change, while orange shows the additional effect of mitigation via the introduction of a carbon tax. On both charts, results are shown for the three socioeconomic pathways chosen for the study – Carbon Brief previously published an article explaining the differences between these pathways – and symbols are used to show the results from the different agricultural economic models used by the researchers.

The left-hand chart shows how, although the expected effects of climate change are smaller under RCP2.6, the overall number of people facing hunger is expected to be larger than under RCP6.0.

The right-hand chart shows how changes in calorie consumption are expected to be largest under the RCP2.6 scenario – especially for “SSP2”, a “middle of the road” socioeconomic pathway which expects progress towards the world’s sustainable development goals to be slow.

In their research paper, the scientists say the findings “should not be interpreted to downplay the importance of future GHG emissions mitigation efforts, or to suggest that climate policy will cause more harm than good”.

However, the results should highlight the need for “complementary policies” alongside mitigation efforts, which could provide a “safety net” to the countries most vulnerable to increases in hunger, the researchers say.

Such policies could include efforts for “targeted schemes encouraging more productive and resilient agricultural production systems”, the authors say.

They add that, in some cases, a carbon tax could have “synergistic effects with food security”. For example, taxes on red meat could encourage people to choose healthier, low-carbon alternatives, the researchers say. In addition, a carbon tax could generate revenue that could be used for “food aid programmes in low-income nations”.

The main findings of the study “critically hinge” on the assumption that mitigation will be achieved by a blanket carbon tax across all sectors, regions and greenhouse gases, says Dr Christoph Bertram, a researcher in climate mitigation policies from the Potsdam Institute for Climate Impacts Research (PIK), who was not involved in the study. He tells Carbon Brief:

“The paper, unfortunately, misses the opportunity of making it clear that a range of options exist to reduce and even revert these consequences – as a multitude of policy design options towards mitigation exist.

“Earlier studies have shown that food prices can very well decline under stringent mitigation, if carbon pricing is complemented by policies that actively promote healthier diets or if the emissions pricing is implemented in a differentiated way – with lower prices applied for land-use emissions, for example – so that the impact on the land-use system is reduced.”

The findings show that “climate mitigation needs creative solutions to help the poor”, says Prof Tim Benton, a leading scientist in food security from the University of Leedswho was also not involved in the research. He tells Carbon Brief:

“If price becomes a leaver for reducing demand, it is likely to be regressive and affect the poorest and most vulnerable. The issue – as this study discusses – is not to do this, but to find ways of supporting the most vulnerable. Part of this may be in the geographic scope of where mitigation is focused, part of it may be greater social support.”

Delaying mitigation efforts is likely to compound the problems facing the world’s hungry, he adds:

“The danger of not doing mitigation because there are likely to be losers is this will, ultimately, be self-destructive because, over time, the proportion of people getting hurt by climate disruption will increase. The need is to be creative to find ways of ensuring losers don’t lose.”