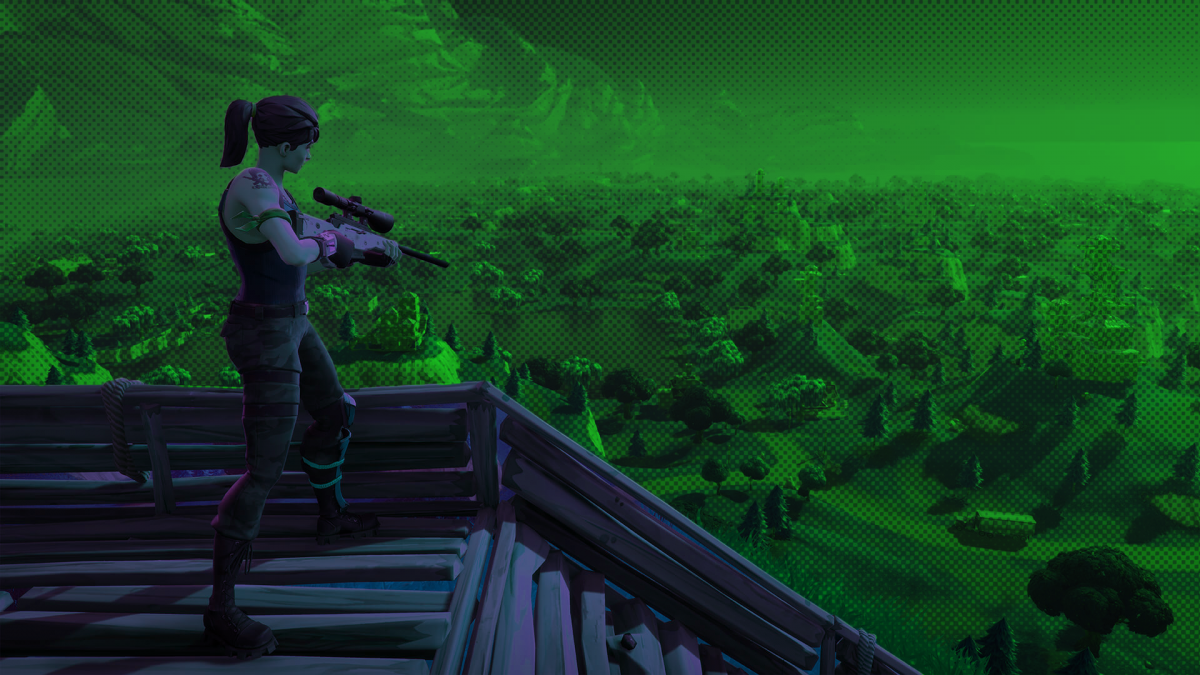 Fortnite Didn’t Do Anything New. That’s Why It Will Shape The Future Of Gaming.

They put the best parts of other games in a big, cartoony blender, and now we can’t get enough.

If you are even remotely tuned into the world of video games, Epic Games’ Fortnite is all but inescapable. With more than 125 million total players, Fortnite is the most popular video game in the world. It’s the latest in a long line of games that worrywarts and buzzkills say is rotting kids’ brains — they’re doing the game characters’ victory dances in the streets like they just scored a touchdown, and Fortnite-themed prom-posals are emerging in both the game and in real life.

But there’s a reason that you can’t talk about the game without comparing it to some other popular games. It’s because Fortnite didn’t do anything new.

That doesn’t make “Left4Dead meets Minecraft” any less of a triumph. Rather, “The Hunger Games meets Halo” stands to change the way we make, play, and watch video games.

Part of the reason Fortnite has blown up, game experts assert, is because it incorporates the best parts of other games and makes things as simple as possible. That makes it appealing not just to your typical gamer, but also to the casual onlooker who normally has no clue what they’re watching.

“What I like about Fortnite is I think it’s much more audience-friendly,” Frank Lee, a digital media expert at Drexel University told Futurism. Trained as a cognitive psychologist, Lee founded Drexel’s Entrepreneurial Game Studio, a video game incubator, in 2013. Lee argues that other games that have become esports (such as Blizzard’s Overwatch and both of its Starcraft games) are largely inaccessible to people who haven’t themselves played the game. With Fortnite, it’s easy for an audience to be engaged even if they’ve never sat down to play — other games are harder to appreciate unless you know what’s going on.

“Fortnite makes perfect sense,” Lee said. “It’s a very simple concept; you watch it and you get it.”

“Fortnite makes perfect sense. It’s a very simple concept; you watch it and you get it.”

The most typical way people play Fortnite is as battle royale. One hundred people are thrown into an expansive but ever-shrinking battlefield — it’s a free-for-all in which the only objective is to be the last player standing. The game is also platform agnostic; it runs just as smoothly on a mobile device as it does on a high-end gaming computer.

That style of play is just one of many clever adaptations and features borrowed from other successful games that, in recent months, moved Fortnite from being a somewhat-unknown shooting game to the major force it is today.

Fortnite is free to play, just like Riot’s League of Legends. But unlike Blizzard’s Hearthstone, the optional purchases aren’t all-but-necessary if you want to win. Fortnite lets you build bizarre, physically-impossible structures for cover or just because, the gameplay is more engaging than Minecraft’s sandbox style of play in which you could find yourself endlessly punching trees to gather raw materials. Fortnite lets you hang out with your buds like in a casual round of Left4Dead or Halo, but the cartoony graphics lets the game fly under the radar of all but the most wary-eyed parents. Fortnite has seasons that introduce new in-game events, but unlike Blizzard’s Starcraft, they cycle quickly enough to keep the game fresh.

“Most games, like most other [forms of] entertainment, are evolutions of something that already exists, but they usually incorporate some unique features or capabilities,” game expert Dennis Wixon told Futurism.

“Most games… are evolutions of something that already exists, but they usually incorporate some unique features or capabilities.”

Wixon currently works with student game designers at University of Southern California’s School of Cinematic Arts. But he spent much of his career managing research teams at Microsoft who looked at the user experience of different video games, from Microsoft’s first ventures into the video game market through its launch of Halo and beyond.

Wixon wasn’t familiar with Fornite, but when he described how he would approach making a game as user-friendly and grabby as possible, he named a lot of things that Fortnite has going for it: straightforward gameplay, simple and intuitive controls, and a wide distribution. He also assumed that Fortnite had a compelling storyline. As far as I can tell, there is no narrative to Fortnite.

I have played Fortnite on two separate occasions. Both times I made myself a large adult beverage, started recording my computer to share with my colleagues, and got to work.

I was immediately plunged into a room full of people unloading large guns into other people who, unaffected by the shooters, were busy breakdancing. It took me a second to realize that we were all just waiting until we reached a quorum of 100 people, at which point the game could start. I tried every button on my keyboard but had no way of communicating with them outside of the universal language of dance.

Once we reached our 100, we apparated into a floating school bus (sure, why not) and sky-dived towards the island on which the battle royale would take place. Unsure of how to deploy my parachute, I prepared to plummet to my death. Thankfully, I stumbled upon the parachute button and landed on a scenic peninsula near Loot Lake.

In every round of Fortnite that I’ve played, my strategy has been the same: build my dream home and do not shoot any guns.

It may not be the most fun strategy, but it’s effective — it’s always brought me into at least the top 20. And the game’s appeal still shines through: I create fantastic cottages with impossible stairways and rooftop views that I could never afford on my journalist salary in New York City. Inevitably, though, a more violent gamer always came across my work and murdered me. I had a blast.

“As a concept, it’s easy to pick up. It’s really polished, and Epic is good about getting new content,” says Lee. “And that Minecraft-like building is really interesting. That adds to it.”

Lee and Wixon both told Futurism that the user’s experience must be at the forefront of all good game design.

“For all the processing power and graphics on a console, no one buys them for that. They buy them for the games they can play,” says Wixon.

As games have evolved, it’s gotten easier to focus on the people playing them. With the emergence of online play, more companies are able to look at how people are playing their games in real time and fine-tune the experience. This also, Wixon says, helps designers see the difference between a part of a game that’s challenging on purpose, like a difficult level or a tense boss battle, and something that’s unintentionally challenging, like a poorly-designed mechanic or a narrative choice that makes sense to the writer but not the audience. By finding and cutting out all the stuff that’s unintentionally challenging, whether it was excessively artsy or just poorly-made, game designers can keep players engaged for longer.

Wixon gave one example that he oversaw while he was at Microsoft. When Microsoft bought Bungie, the studio behind the Halo series, for the Xbox, programmers knew that no one had been able to make a first-person shooter for a console that handled as well as it would on a PC. Aiming with a joystick would simply always be harder than doing so with a mouse. There were two solutions: either have the player’s crosshairs snap to their target, or do nothing and let the player careen back and forth as they tried to line up a shot. The first would be simple but boring, the second would be difficult but not in the fun way. Eventually, they arrived at a novel solution: alter the joystick’s sensitivity the closer the crosshairs are to a target. That means as soon as the player was almost aiming at an enemy soldier, the joystick would slow down so they could line up a headshot more easily. The result was a game that was challenging for players, but in a way that led to more engaging gameplay.

“Be aware of what the goal of the game is, of who you’re building it for, and try to see the game the way they’ll see the game,” Wixon says. “It’s a real sad thing to see a game that could be great fall down because there’s ‘interface issues’ in the design of the game. That’s really too bad.”

“Be aware of what the goal of the game is, of who you’re building it for, and try to see the game the way they’ll see the game.”

This approach is something Fortnite has excelled at. Though I used to be an active gamer, I’ve fallen out of the loop and now I mainly stick to the same games I played in high school. Starcraft, Left4Dead, Super Smash Bros, and the like make up the bulk of my gaming habits now. I’ve never played Minecraft, but I’m pretty sure I could sit down at my computer and quickly get a feel for the controls (after making a few shacks with two walls, no stairs, and half a roof).

Fortnite is designed to be as easy to play as possible, no matter the device you play it on. The construction controls are laid out on the screen at all times; everything is bright, shiny, and fun-looking.

And that, Lee argues, is what will make Fortnite the next big game to attract a league of professional gamers. Epic is betting on that, too — the company recently pumped $100 million in prize money into a formal league. The first major competition event didn’t go so well because of technical issues, as The Verge reported, but once they get the hang of things Epic may be able to grab a much larger audience than other esports.

Compare that to existing esports like Overwatch, which Blizzard specifically designed to be played as an esport — the audience has to be at least somewhat familiar with the game’s fast-paced mechanics. With Fortnite, not so much — any spectator would quickly realize that I’m making a house, watch me (and 98 of the other players) get destroyed, and be entertained.

“Something in the battle royale genre will become really popular in esports,” says Lee. “Whether it’s Fortnite or something that comes after Fortnite, the idea of battle royale — start with many, end with one — will be there as an esport genre.”

Lee’s partial to classic arcade games like Space Invaders, Asteroid, and Tetris, which he feels is the most perfectly-designed game ever. Many games released after these have focused on introducing better graphics, better motion capture technology, and the like. But Lee is drawn to games that are laser-focused on fun gameplay. With the emergence of more experimental games on smart phones, an emphasis on gameplay is back in vogue.

Fortnite was able to emerge from that highly experimental environment, incorporate the best parts from it, and position itself as the most popular and best game out there. And while Epic hasn’t introduced anything new on its own, its goofy, cartoony repackaging was just unique enough to make a game that’s fun and accessible for even the most casual gamer.

I don’t know why I’m being airdropped from the sky onto a tropical island with 99 strangers who want to kill me. And in the end, it doesn’t really matter. But I do know that I want to go back.