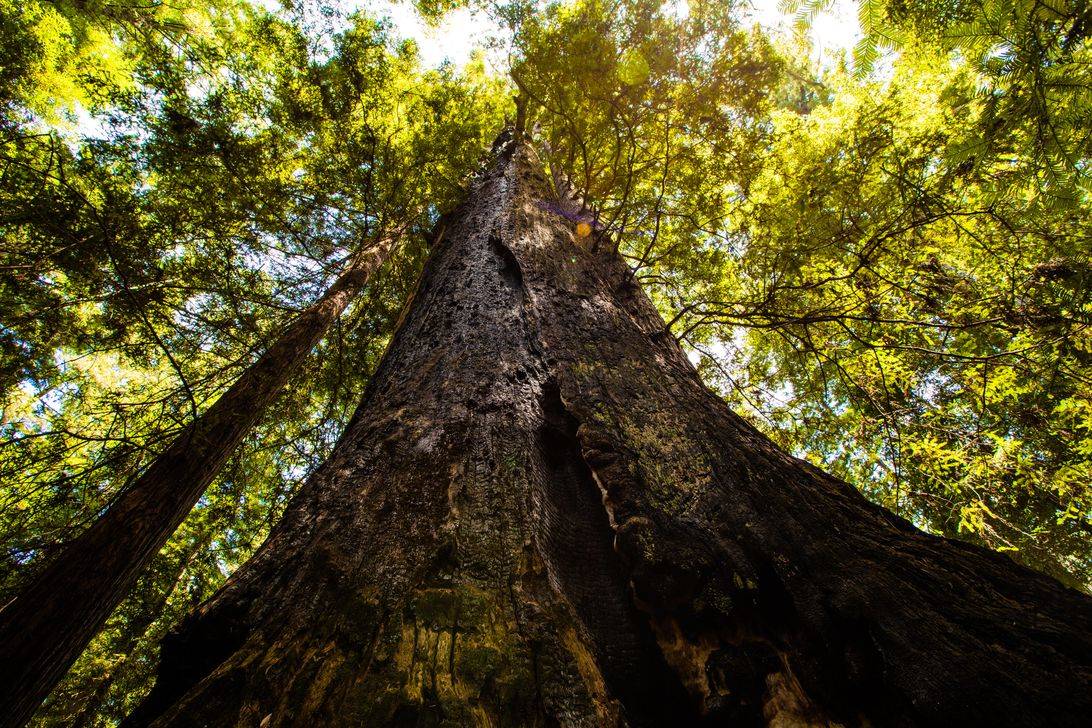 Among some of the tallest trees in the world, warmer temperatures are making for faster growth than ever before.

With record-breaking summer temperatures in Alaska, melting sea ice in Greenland and animal species going extinct, the effects of a changing climate are grim. But for one of the oldest and largest living things on Earth, a warmer world isn’t completely terrible, at least for the time being. California’s coast redwood trees are now growing faster than they ever have, according to an ongoing study from Redwoods Climate Change Initiative, producing a tremendous amount of wood in the process.

Sam Hodder, president and CEO of the Save the Redwoods League, a San Francisco nonprofit that sponsored the study with Humboldt State University, says it was a surprising finding for the magnificent trees, which can reach as high as 380 feet (the height of a 35-story building) and live for 2,000 years.

“What we’ve learned is that contrary to what we expected, the redwood forest is healthier and growing faster today than ever before,” he says. “Redwood forest turns out to be not just one of the few winners in the climate change world but in fact is a critical resource in the fight against climate change.”

The good and the bad

Though the study didn’t conclusively link climate change to the redwood growth spurt, it suggested a relatively simple theory. As temperatures and the amount of carbon dioxide in the atmosphere have increased, the fog that typically shrouds the northern California coast has decreased. Fewer foggy days mean more sunlight hitting the redwoods, which creates more photosynthesis in the tree, leading to the rapid growth, even through drought.

Larger trees also can sequester more carbon dioxide, a useful task when there’s more carbon dioxide in the atmosphere. “As of 2019, we find no evidence of redwoods retreating from native forests as the climate changes,” says a report from the study, published this year. “These iconic trees are growing at faster-than-expected rates … playing an outsized role in global climate mitigation despite their limited geographic distribution.”

After loggers wiped out 95% of old-growth redwoods in the late 19th century, the trees now exist in only a few isolated pockets on the northern California coast, leaving them extraordinarily vulnerable to a range of threats, including illegal logging, invasive plant and animal species, and marijuana cultivation. And while climate change hasn’t produced catastrophic effects so far, higher temperatures and a denser forest spell other dangers.

“With wildfire frequency predicted to increase with climate change and significant fuels accumulation in the forest today, the ecosystem is vulnerable to severe fire damage,” said a 2018 report from the League on the state of redwood conservation (though the thick, fibrous bark of redwoods resists fire, other vegetation can burn). “Many specific consequences of climate change on coast redwood biology and ecology remain unknown.”

Increased fire is also a threat for another celebrated redwood species, the giant sequoia, which lives across California on the western slope of the Sierra Nevada. Reduced Sierra snowpack from warmer temperatures could also deprive the immense trees of water.

Speaking for the trees

As the RCCI study continues, the League will monitor 7,000 trees across 44 acres. Last year, it took a huge step toward study and conservation when it spent $9.6 million to purchase a 730-acre coast redwood grove in Sonoma County that has largely been untouched since the early 20th century.

Hodder said the abundance of towering ancient trees in the Harold Richardson Redwood Reserve — the oldest is 1,640 years old and 239 feet tall — makes it a perfect place to continue observing how the trees are responding to a changing climate. “Old redwoods don’t stop growing. In fact, the older and bigger the tree, the more they grow. We found one tree that puts on 2,000 pounds of wood in a single year in just one tree. That’s extraordinary.”

Another prime location is Jedediah Smith Redwoods State Park in Del Norte County near the Oregon border. Hodder calls it the largest carbon sink in the world, with the most leaf surface area per acre of anyplace in the world. “What’s amazing about the coast redwood forest is how resilient they are,” he said. “Even though we’ve cut down 95% of the original redwood forest, the trees are still sprouting back from the very same root system.”

Over the next two years, the League will track redwood growth rates in 20 new forests covering young and old trees, both on the coast and inland, and at a variety of elevations. The goal, Hodder says, is to understand how much humans depend on the trees. “There’s a chance for restoration, and opportunity for changing the story of the redwoods from anxiety about the loss of the habitat to optimism that we can heal the ecosystem together.”