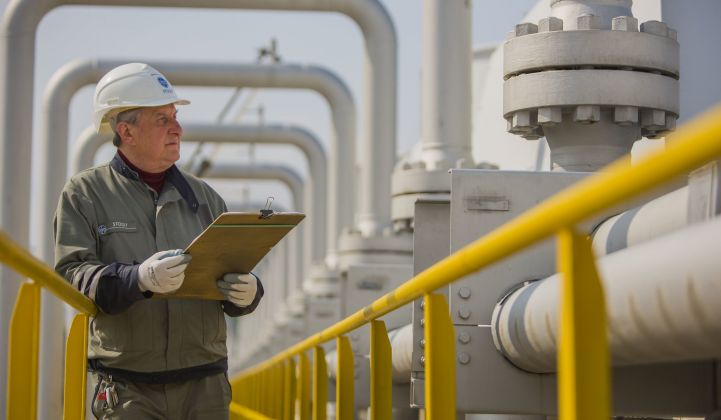 Italy’s Snam has created a new hydrogen business unit, pledging to direct 20 percent of its investments to low-carbon projects.

The largest natural-gas infrastructure firm in Europe has launched a new hydrogen business and increased its financing for low-carbon projects.
Snam, which runs the Italian gas grid and is active in France, Greece and the U.K., has pledged to direct 20 percent of its annual investments into sustainable projects by 2023 via its SnamTec arm.
SnamTec was launched in January to act as an innovation vehicle to help the group navigate the energy transition. Publicly traded Snam, whose largest shareholder is the Italian government, cleared €2.6 billion ($2.9 billion) of revenue last year. The company’s recent strategic documents lean heavily on renewable gas, power-to-gas and hydrogen.
“We are convinced that hydrogen produced from renewable sources will give a decisive contribution to achieving the climate objectives, and that Europe and Italy will be leaders in the development of the technology,” said Snam CEO Marco Alverà in a statement.
Over the long term, Snam expects hydrogen and biomethane to offset reductions in the company’s natural gas business, Alverà told analysts.
Snam forecasts falling costs for green hydrogen, produced with electricity from renewables. The company believes green hydrogen will be cheaper than “gray” hydrogen made with natural gas by 2030 and cheaper than natural gas itself by 2040.
Snam has already been running a hydrogen trial in southern Italy where it has been injecting hydrogen into the gas grid at a ratio of 5 percent. This will be increased to 10 percent before the end of this year. The existing grid infrastructure is “largely hydrogen ready” with less than 1 percent of the system’s component requiring an upgrade.
Snam’s new hydrogen business unit will be tasked with adding more pilot projects and supporting the build-out of a hydrogen supply chain.
The company is also looking at the potential for geological hydrogen storage. Alverà told analysts the company will undergo major electrification so that it can use excess power in the grid to create hydrogen. Snam is working with Italy’s power grid Terna on this possibility.
With a fuller integration of hydrogen, Snam predicts Italy could derive 23 percent of its total energy demand from hydrogen by 2050.

The International Renewable Energy Agency has called hydrogen the “missing link” of the energy transition. By using renewable power to create hydrogen, it can be used for heating, transport and industry. It also touted the ability of hydrogen storage, in new and existing gas storage infrastructure, to act as an energy storage resource for variable renewable energy generators.
Energy firm Vattenfall is eyeing hydrogen as a demand driver. It sells twice as much electricity to business customers than it does to consumers.
When asked which technology Shell New Energies would like to see benefit from subsidy support, EVP Mark Gainsborough recently told GTM he’d have to go for hydrogen.
The backbone of physical distribution networks and the willingness of their operators, including Snam, will be essential for hydrogen’s progress. A group of firm’s, including the U.K.’s gas grid operator, have proposed a hydrogen propelled plan for a net-zero industrial cluster.