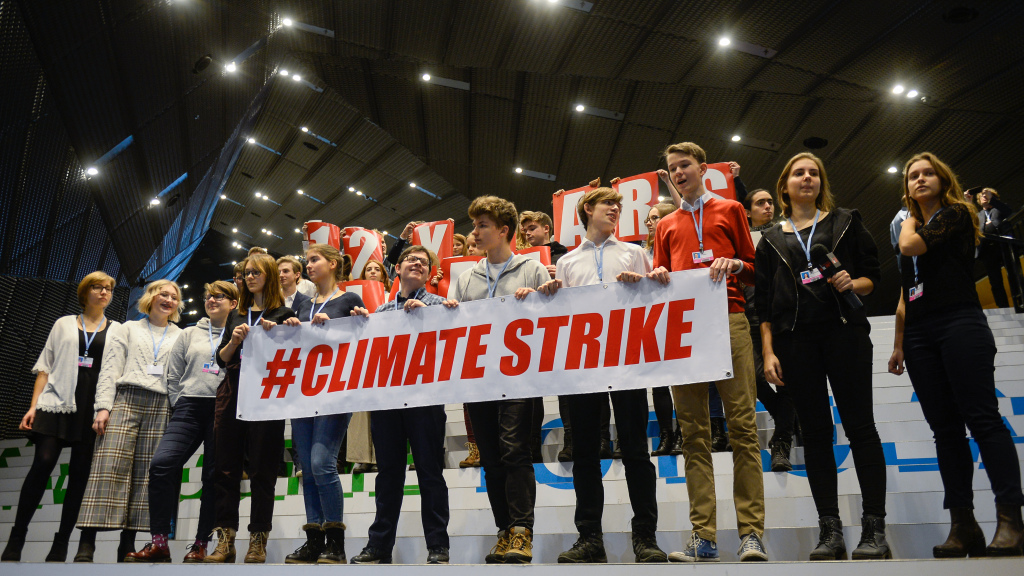 Climate change activists vow to step up protests around world

This story was originally published by the Guardian and is reproduced here as part of the Climate Desk collaboration.

The summit agreed on rules for implementing the 2015 Paris agreement, which aims to keep global warming as close to 1.5 degrees C (2.7 degrees F) as possible, but it made little progress in increasing governments’ commitments to cut emissions. The world remains on track for 3 degrees C of warming, which scientists says will bring catastrophic extreme weather.

Many NGOs said national leaders at the summit had failed to address the urgency of climate change, which is already making heatwaves and storms more frequent and intense, harming millions of people.

May Boeve, the executive director of the 350.org climate change campaign group, said: “Hope now rests on the shoulders of the many people who are rising to take action: the inspiring children who started an unprecedented wave of strikes in schools to support a fossil-free future; the 1,000-plus institutions that committed to pull their money out of coal, oil, and gas, and the many communities worldwide who keep resisting fossil fuel development.”

The school strikes began in August as a solo protest by 15-year-old Greta Thunberg in Sweden. Addressing the summit in Poland, she said: “If children can get headlines all over the world just by not going to school, then imagine what we could all do together if we really wanted to.”

“You say you love your children above all else,” Thunberg continued, “and yet you are stealing their future in front of their very eyes. We have run out of excuses and we are running out of time. We have come here to let you know that change is coming, whether you like it or not. The real power belongs to the people.”

Members of the Extinction Rebellion (XR) movement said there was a rising tide of protest. “We pay tribute to activists, students, civil society, and the leaders of vulnerable countries who are rising up all over the world demanding more,” said Farhana Yamin, from XR U.K. “We need now to work together to build an emergency coalition focused squarely on tackling climate devastation.”

XR branches have been set up in 35 countries, organizers said. U.S. protesters aim to organize a day of action on January 26, 2019, and international activists are planning a global week of action from April 15, 2019. XR protests took place in more than a dozen towns across the U.K. over the weekend, from chalk-spraying a government building in Bristol to holding a “die-in” demonstration in Cambridge and handing out trees in Glasgow.

Patti Lynn, the executive director of the Corporate Accountability campaign group, said: “We will continue to build our movements at home and we will escalate global campaigns to hold big polluters accountable for their role in the climate crisis. The movement to demand climate justice has never been more united, organized, or determined. Our day is coming and we will win.”

Jennifer Morgan, the executive director of Greenpeace International, said: “People are fed up, outraged and are taking action to defend their homes and children and pushing their leaders to act. These people are the hope of our generation and governments must finally stand with them and give us all reasons for hope.”

In the U.S., Michael Brune, the head of the Sierra Club environmental campaign group, said: “The American people are joined by the rest of the world in signaling that they will not tolerate any more of Trump’s shameful blustering and inaction, and they have taken up the mantle of climate action while Trump abdicates any semblance of global leadership.” He said more than 100 U.S. cities had committed to 100 percent clean energy, covering 15 percent of the U.S. population.

Stephan Singer, a chief adviser at Climate Action Network, an umbrella group for 1,300 NGOs in more than 120 countries, pointed to the wide range of people taking action and demanding more, including youth and faith groups, indigenous peoples, health authorities, farmers, trade unions, city authorities, and some financial institutions. “All these actions and many more have to magnify and multiply in the next years,” he said.