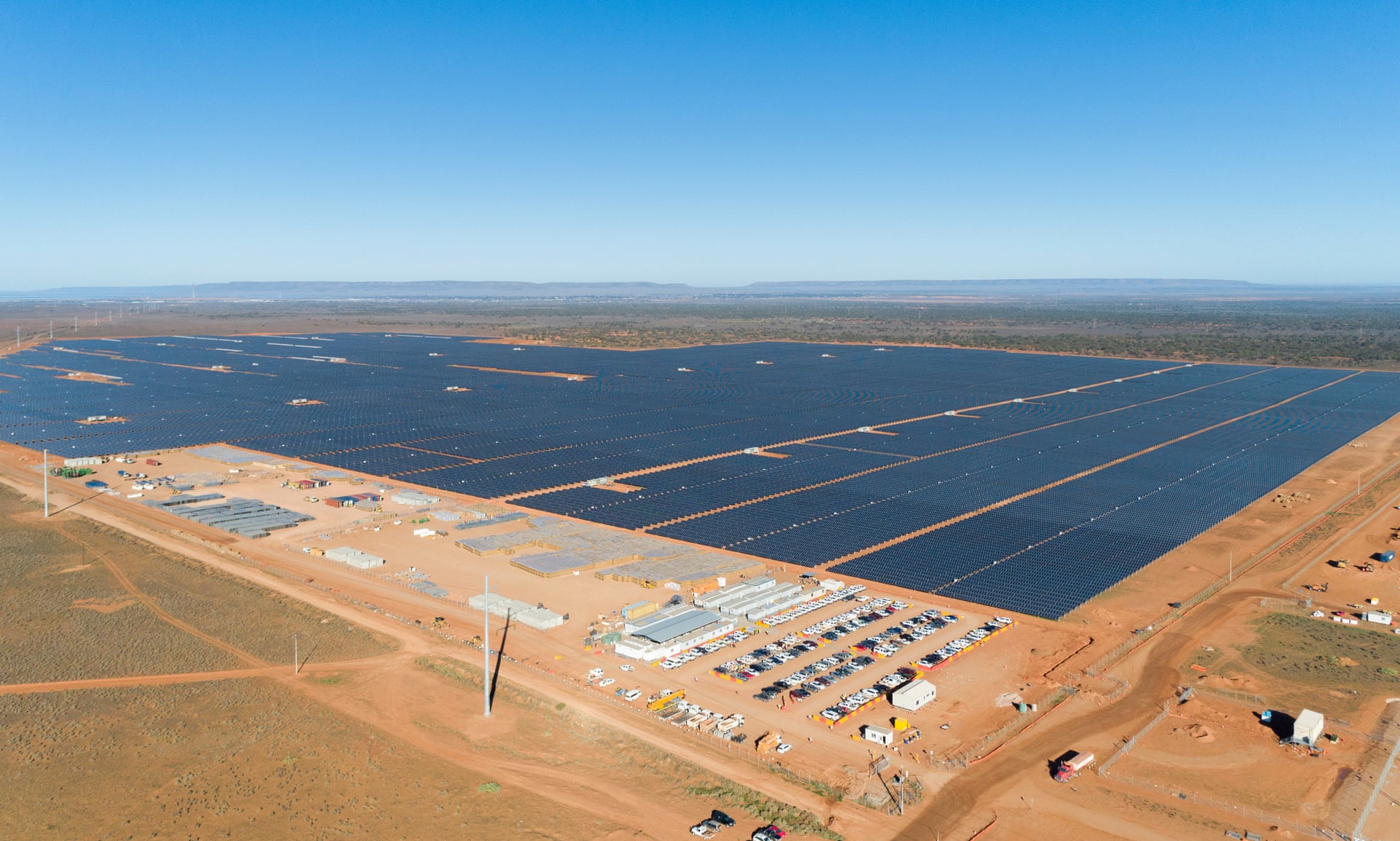 Clean energy is cheap, surging – and headed for a fall

The relentlessly corrosive nature of political debate about climate change can sometimes mask that this is a golden moment for the clean energy industry in Australia.

A near-constant stream of investment announcements suggests a barrier has been knocked down such that leading renewable technologies, so long dependent on public subsidies, have assumed market supremacy.

In the Pilbara, Macquarie Bank has joined a proposed $22bn project that plans to use solar and wind to run local mines, create “green” hydrogen energy for north Asia and possibly export electricity to Indonesia. In regional South Australia, the British billionaire industrialist, Sanjeev Gupta, has said he considered building a coal plant to run the Whyalla steelworks he bought last year, but decided it was cheaper to throw roughly $1.5bn at solar, pumped hydro storage, battery storage and co-generation (creating energy from waste gas) as he adopts his “green steel” model. Outside Townsville, zinc refiner Sun Metals recently opened Australia’s first large-scale solar farm built by a major energy user to service part of its own needs and feed the grid.

The Clean Energy Council lists 69 large-scale projects across the country that have recently reached “financial close” and are either under construction or presumably about to be. They should mean $15.6bn investment and add 10,978 megawatts of renewable energy capacity to the system. These projects – just those the council knows of – are in addition to the 30 new clean energy plants that started operating in the first nine months of the year. Contracts are being signed at historically cheap prices – a reported $52 per megawatt-hour for the giant Stockyard Hill wind farm in central Victoria, for example.

Meanwhile, rooftop solar panels are being installed at an astonishing rate. In May, the head of the Australian Energy Market Operator, Audrey Zibelman, said six panels were going up across the continent every minute, adding the capacity of a large coal power station each year. The consumer watchdog recently recommended incentive schemes for small-scale systems be wound back. Some in the energy industry have suggested there will soon be more solar power coming into the grid than Australia can use but a new study by consultants Green Energy Markets, which examined the amount of solar power expected every 30 minutes out to 2021, rejects this idea. The energy minister, Angus Taylor, says the federal incentive scheme will stay.

The investment avalanche is driving an unprecedented transformation of the electricity grid. At the time of writing, clean energy had met 21.8% of national electricity market demand over the past week, suggesting the country is on the cusp of meeting the 2020 renewable energy target of about 23% ahead of schedule. The Clean Energy Council’s chief executive, Kane Thornton, says the momentum is massive; Green Energy Markets suggest it could mean renewable generation hits 33.3% by 2020. Analyst and advocate Simon Holmes à Court says it is likely as much clean energy capacity will be built over the next two years as over the previous 40.

In July, the market operator found a business-as-usual path, without policies ramping up, was likely to lead to about 46% clean energy by 2030. It underlined the hollowness of the government’s now-dumped pledge to introduce a national energy guarantee to reduce greenhouse gas emissions from electricity by 26% below 2005 levels over that timeframe, and implied Labor’s 50% renewable energy target would take little effort. (Both targets are less than the change in coal use the Intergovernmental Panel on Climate Change suggests is necessary for Australia to play its part in limiting global warming.)

But while the direction is clear, the picture is murkier than this moment suggests. There are signs investment may soon slow markedly.

Most of the investment is being driven by the renewable energy target, which peaks in 2020 and stays at that level for the following decade. The spending to meet the target has come in a rush lately, mainly because then-prime minister Tony Abbott commissioned a review by businessman and climate sceptic Dick Warbuton, who wanted to end it. The uncertainty triggered an investment strike that lasted the better part of two years before the target was ultimately reduced.

But the target has done its job. With no policy to replace it, the incentive to build clean energy plants is expected to fall off significantly. This is already being seen in wholesale energy futures markets, where it is playing a role in prices trending upwards again. There is consistent evidence, from the market operator down, that it is cheaper to build variable clean energy with “firming” support than alternatives. New performance standards requiring investors in areas flooded with renewable energy to install expensive grid-stabilising technology needed to smooth the transition are not expected to change this. But demand for electricity is barely growing. Without a policy that gives the industry a map for when new clean generation will be needed, new plants are unlikely to come online until coal plant owners announce more closures.

There are exceptions. Tristan Edis, a Green Energy Markets analyst, points to companies signing contracts with state governments: Victoria recently announced six wind and solar farms had won contracts under its first renewable energy tender after a similar round for battery storage, and Queensland has promised to soon follow with the result of its auction. Also, some large energy users with deep pockets may build or fund their own generation needs to hedge against market costs, as Sun Metals did in Queensland. But these are investment spikes, not maps.

“Beyond that there is no appetite for the major energy retailers to do deals, so I expect we’re not going to see the large-scale investments,” Edis says. “Instead of seeing thousands of megawatts of new capacity a year we may see a few hundred.”

Other energy system experts agree. Holmes à Court, from the Energy Transition Hub at the University of Melbourne, says it is little understood that consumers are no longer subsidising new developments under the renewable energy target through their bills. Long-term pricing contracts being signed between wind and solar farm owners and energy retailers are now setting such low prices that large-scale generation certificates – documents that retailers must buy and hand in to the government as proof they are meeting their renewable obligation – are effectively being thrown in for free. The target’s role recently has been to provide investment confidence to ensure that long-term contracts are signed. Holmes à Court says without it or a new policy to replace it uncertainty associated with selling electricity on the spot market could increase the risk margin on finance or make a project “unbankable” until the next coal plant closes and pushes up the wholesale electricity price.

AGL has announced it will shut and replace its Liddell black coal plant in NSW in 2022 (and copped no shortage of opprobrium from the Coalition for doing so). Yallourn, a brown coal station in Victoria, could be squeezed out by the large-scale solar rush already announced in that state. But in terms of closures that will spark new investment the timeframe is unclear, especially given the government hopes to extend the life of existing coal plants and possibly underwrite new ones.

This is why interested parties from across the spectrum – the energy industry, business, consumer and welfare groups and climate activists – have been united in calling for a bipartisan policy. While Taylor has dismissed claims the government should try to eliminate uncertainty as naïve, and the gap between the major parties has widened to a gulf since Scott Morrison replaced Malcolm Turnbull, those invested in the debate want the best chance for the transition to happen as smoothly and cheaply as possible for everyone.