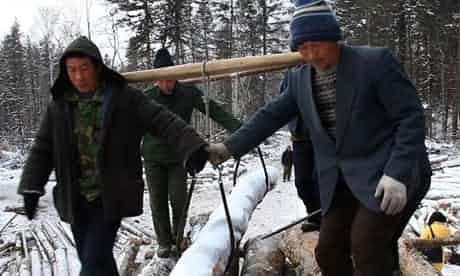 Dubbed “The Great Green Wall,” a human-made ecological barrier designed to stop rapidly encroaching deserts and combat climate change is coming up across China. By 2050, the artificial forest is to stretch 400 million hectares – covering more than 42 percent of China’s landmass.

China already has the largest human-made forest in the world, covering more than 500,000 square kilometres, and the Communist Party this year announced it had reached its stated goal of 20 percent forest cover by 2010. The government envisions a line of trees stretching 4,480 km from Xinjiang province in the far west to Heilongjiang province in the east.

The project began in 1978, and three years later the National People’s Congress, China’s top legislative body, passed a resolution to make it the duty of every citizen above age 11 to plant at least three Poplar, Eucalyptus, Larch or other saplings every year.

Ordinary citizens have planted some 56 billion trees across China in the last decade, according to government statistics. In 2009 alone, China planted 5.88 million hectares of forest. Former U. S. Vice President and Nobel Prize winner Al Gore has said China plants two and a half times more trees every year than the rest of the world combined. He called the endeavour “the largest tree-planting programme the world has ever seen.”

The reforestation programme is part of a multi-pronged effort by China to combat climate change.

In 2007, China surpassed the United States as the world’s biggest carbon emitter, and emissions are expected to grow as China’s economy does. China has invested heavily in clean technology and has pledged to close thousands of heavy- polluting factories, but it has also faced criticism from other countries for moving too slowly and failing to agree to international standards.

The benefits of reforestation, advocates say, are evident. Notably, the trees help stop China’s fast-moving deserts in the west and north. In a 2006 report to the United Nations Convention to Combat Desertification, China declared that 2.63 million square km – or 27 percent of its landmass – was covered with desert, compared with 18 percent in 1994. China’s grasslands have shrunk by 15,000 square km annually since the early 1980s.

Moreover, China’s forestry scientists say the new forests are better at absorbing carbon than slow-growth forests (of which China has virtually none remaining). They argue that fast-growing poplar and white birch trees capture perhaps double the amount of carbon as Korean pine, larch and firs.

The government is increasingly using the Great Green Wall as a propaganda tool to trumpet its efforts combating climate change. Every spring, about three million Communist Party members, civil servants and model workers head to the countryside to plant trees in a massive propaganda event.

But doubts remain about the impact of this green campaign.

While the government stresses the forests’ importance in combating decades of environmental damage, some critics say the type of forests planted, and their location, limit their effectiveness. They argue that the Great Green Wall has contributed to a significant decline in China’s forest quality. In many of the newly planted forests, few animals thrive, some experts explain.

Jiang Gaoming, professor at the Chinese Academy of Sciences’ Institute of Botany and vice secretary-general of the China Society of Biological Conservation, said the Great Green Wall has, in some places, accelerated ecological degeneration by putting pressure on precious water resources in arid and semi-arid regions.

In a study released in May, scientists from the University of Oklahoma and Fudan University in Shanghai found that reforestation and afforestation – the creation of new forests – actually lowers a forest’s potential to lesson climate change.

The study found that areas where natural forests are replaced by reforestation – called plantations – do not actually help control carbon emissions, and that converting farmland to forests decreases the amount of carbon absorbed by the soil.

Authors of the study also said that converted soil also loses 80 percent of its capability to degrade methane, a greenhouse gas that traps more heat than carbon dioxide.

Jiang Fengguo, director at the Soil and Water Conservation Supervision Station in Hexigtan Banner, Inner Mongolia Autonomous Region, told IPS that the Great Green Wall has had some success slowing the encroaching desert.

But he worries about the Great Green Wall’s influence on the local biological chain, including its impact on animal species. Moreover, Jiang said, the Great Green Wall may not be enough. “There will still be problems. Desertification still exists, and the continuing deterioration of the ecological environment has not been reversed,” he said.