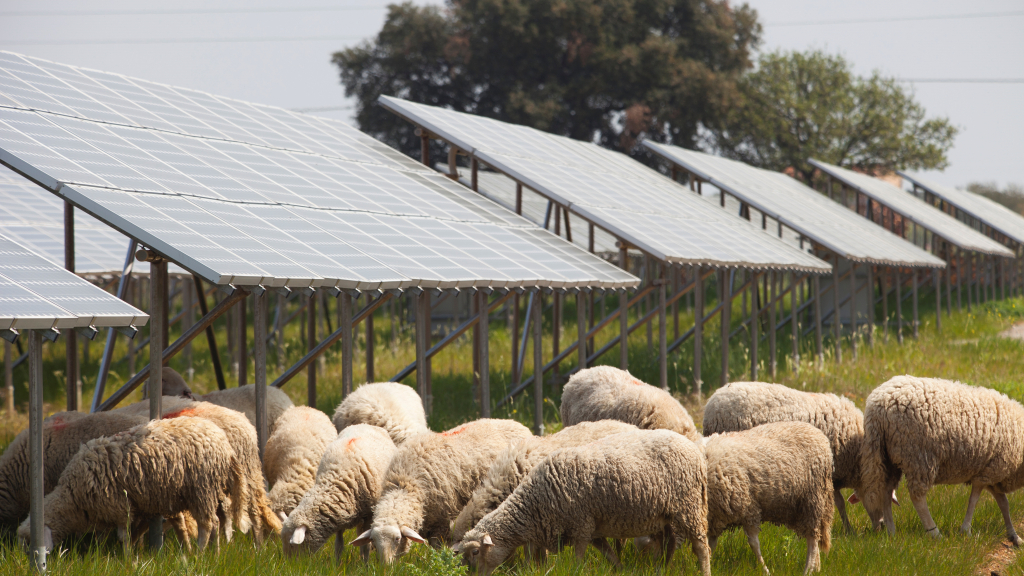 Can solar panels handle the heat of a warming world?

Solar cells need sunlight to generate electricity, but with rays also comes heat. As the planet gets warmer, scientists are warning that temperatures could become too high for solar panels to perform efficiently.

Currently, solar photovoltaic technology makes up 55 percent of all renewable-power capacity, and it will continue to boom, according to a 2018 report on the state of renewable energy. It’s unlikely the planet will become too hot for solar panels to function altogether any time soon. But a recent paper out of the Massachusetts Institute of Technology did find that for every degree Celsius rise in temperature, the voltage output of solar modules declines by an average of 0.45 percent. Under one warming scenario projected by the U.N.’s Intergovernmental Panel on Climate Change, which estimates global temperature to rise by 1.8 degrees C by 2100, that comes out to a 1 percent reduction.

The report calculates that the median reduction will be about 15 kilowatt hours (kWh) per installation, but in some regions, where temperature rise will be greater, as much as 50 kWh. “If you look at the maps [in the report], there are places heating by a lot more than 2 degrees — places that hit close to home,”says MIT’s Tonio Buonassisi, who coauthored the study with fellow photovoltaics researcher Ian Marius Peters. These regions include the southern United States, southern Africa, and Central Asia.

A 1 percent drop in solar energy generation per panel might not seem like much, but if you take into account all the panels across the globe, it adds up. Forecasting solar energy demand is tricky, says Peters, but consider the assumption that solar will supply at least 50 percent of energy demand by 2100, and that by then, there will be billions of solar panels with a total installed photovoltaic capacity of some 20 terawatts. Just 1 percent of that could be enough to meet the energy demand of an entire country. “A small effect on something huge can still have an appreciable impact,” Peters says.

Peters notes that the numbers, though telling, are speculative. Air temperature is just one of several variables that go into assessing solar panel efficiency. There are other climate-related factors, like humidity — the more water there is in the air blocking the sun’s rays from reaching the panels, the less energy is generated — and dust. At the same time, as solar technology continues to improve, so will the performance of each installation.

In the short run, the reductions will affect the solar energy market. “Economic margins will remain low,” Buonassisi says. “If you deprive a solar panel of 1 percent of energy generation, and let’s say you drop from 3 percent [profit margin] to 2 percent, that’s a 33 percent drop in your net revenue, so it makes a really big deal.”

As the global dependency on solar energy increases, more panels will need to be installed to meet fast-growing demand. By one estimate, the world will add 70,000 solar panels each year over the next five years alone. That will require space.

“Renewable powers tend to take up large areas of land, particularly when it’s solar,” says Chad Higgins, a professor of agricultural sciences at Oregon State University. How much depends on several things, including solar technology advancement and microclimate conditions. Using data from existing solar facilities, the National Renewable Energy Laboratory calculated in 2013 that powering 1,000 homes in the U.S. would require 32 acres of land (about 24 football fields) to be converted into a solar power plant capable of generating 1 gigawatt hour per year.

On a global scale, the amount of land needed doesn’t seem like a lot. Amin Al-Habaibeh, a professor of intelligent engineering systems at Nottingham Trent University in England, has argued that covering just a tiny patch of the Sahara Desert with solar panels that use solar thermal technology would generate enough energy. (This process harnesses the sun’s heat rather than its light.)

In another estimate, installing solar panels on less than 1 percent of the world’s cropland would offset global energy demand. That’s the finding of Higgins’s recent study in the journal Nature, which concluded that farmland has the optimal microclimate to generate the most photovoltaic power: plenty of sunlight, moderate temperature, light winds — which increases photovoltaic efficiency, according to the report — and low humidity.

“Panels are a little like people; they like temperate conditions with light winds and low humidity, and that’s when they function the best,” Higgins says. He and his colleagues gathered photovoltaic output data in 15-minute intervals from a solar array operated by Tesla at Oregon State University.

Then, synchronizing that data with meteorological data, they came up with an equation based on the law of thermodynamics that calculates how the microclimates of different land types — farmland, forest, and urban land, for example — affect solar panel efficiency. Using satellite data on the global topography and climate, they calculated the median energy output to be 28 watts per square meter on farmland, which came first among the 17 different land types they studied. Barren land ranked fourth, and urban areas ranked ninth, with a median energy output of 25 watts per square meter.

But land is scarce, and becoming more so under climate change. And just because land is suitable doesn’t mean it’s also available. There’s an ongoing debate over land competition and land rights when it comes to finding space for solar panels. In California, for example, Native American tribes cited the need to protect sacred lands when they protested a large solar farm that was eventually built in the Mojave Desert. Environmental groups continue to push back against a plan approved by the Trump administration to build a massive 3,100-acre solar farm near Coachella Valley and Joshua Tree National Park, which they say will disrupt the desert ecosystem.

When it comes to putting solar panels on farms, especially in the U.S., Higgins has heard his fair share of arguments against the idea. “If you take land out of agriculture, all the [businesses] that provide service to rural America will go away,” he says. There are also criticisms related to aesthetics, soil degradation, and a fear that “land management will end up being dictated by large energy corporations.” Then there’s the fact that a boom in global population demands more food — and food security is already being threatened in a warming world. To feed the 9.1 billion people expected in the world by 2050, food production would have to increase by 70 percent, according to U.N. projections.

Higgins is in a camp of of researchers who think agrivoltaic systems, in which panels are installed on farmland and raised just high enough off the ground to allow for crops to grow around and beneath them, are a potential win for both sides.

This kind of system is used in places including France and Japan, but has only started to catch on in the U.S., as researchers at the University of Arizona and the University of Massachusetts experiment with dual-use solar installation. At the latter institution, according to a report by the news site Civil Eats, researchers found that peppers, broccoli, and Swiss chard grew to about 60 percent of the volume they would in full sun, while the panels produced half the power per acre of a traditional system. But the researchers say the system will pay for itself in roughly eight years in energy savings. Those are just early results from one field; other researchers say that crops could even grow better under the dual system, particularly as technology progresses.

Higgins emphasizes he’s not pushing for all farmland to be converted into agrivoltaic systems. But to encourage more farmers to consider it, the government has to come up with a “sensible land policy,” he says, that will protect farmers’ land while also allowing agricultural technology to evolve “as the sophistication of the modern farmer evolves.”

“You can foresee that the expansion of the global population, and the per-capita demand as that population becomes more affluent, along with the rising impacts of climate change are going to push renewable energy into agricultural areas far more,” he says. “And we have to think of how to make that mutually beneficial for everyone.”