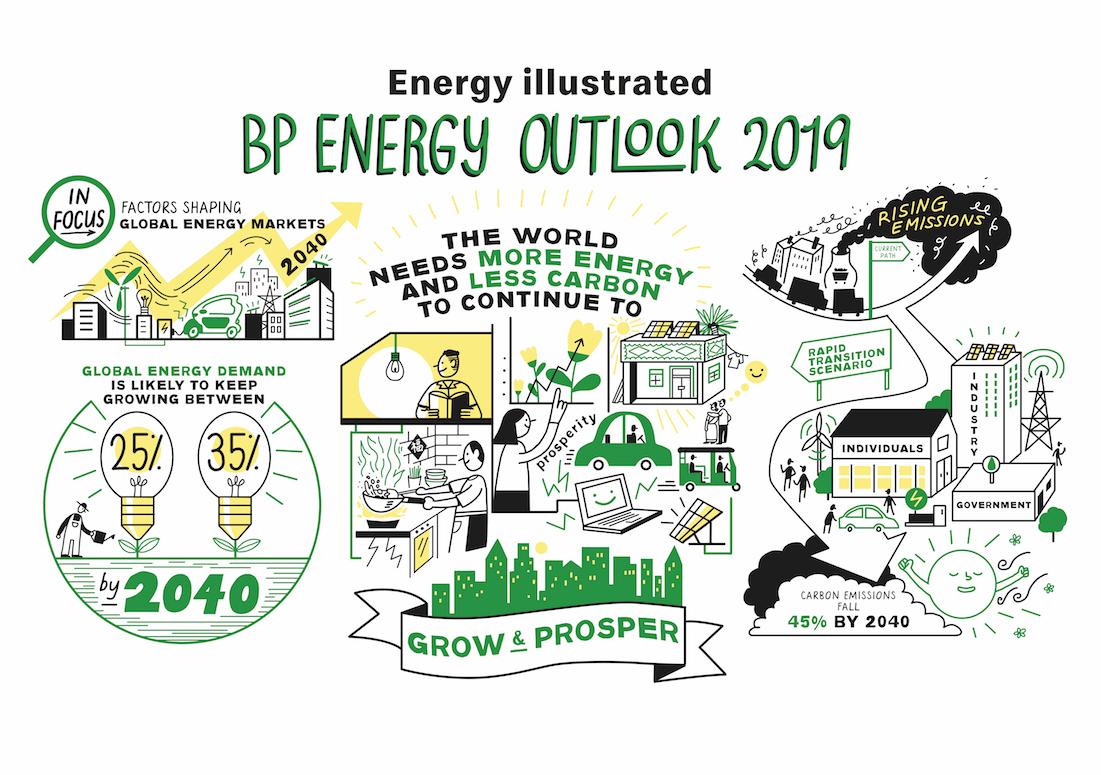 BP Energy Outlook Predicts Renewable Energy Will Be Dominant By 2040

Global oil major BP published its annual Energy Outlook last week and predicted that renewable energy will become the dominant global source of power generation by 2040 at the same time as energy demand increases by around a third, driven primarily by rapid growth in Asia.

BP’s annual Energy Outlook is often a time for anyone with even the slightest grudge against the fossil fuel industry to jump out of the woodwork to offer their two cents on the situation. At the same time as journalists around the globe are simply trying to present the facts of the Outlook, pundits, commenters, and miscellaneous use the time to instead focus on the past — because, heaven forbid we should support someone’s growth by encouraging them in the steps they take.

Which brings us back to BP’s Energy Outlook 2019, in which the oil and gas giant predicts that not only will renewable energy become the “largest source of global power generation by 2040” and that “The pace at which renewable energy penetrates the global energy system is faster than for any fuel in history” but that across all the scenarios it presents, BP nevertheless believes “significant levels of continued investment in new oil will be required to meet oil demand in 2040.”

One Step Forward, Two Steps Back

The old saying says something like, “two steps forward, one step back,” but in the case of the fossil fuel industry, I suspect it is more akin to “one step forward, two steps back.”

This subtle attempt to ensure the continued prosperity of the fossil fuel industry is highlighted further in comments offered at the launch of the Outlook in London by Bob Dudley, BP group chief executive. “The Outlook again brings into sharp focus just how fast the world’s energy systems are changing, and how the dual challenge of more energy with fewer emissions is framing the future,” said Dudley, before adding his subtle caveat: “Meeting this challenge will undoubtedly require many forms of energy to play a role.”

“Predicting how this energy transition will evolve is a vast, complex challenge. In BP, we know the outcome that’s needed, but we don’t know the exact path the transition will take. Our strategy offers us the flexibility and agility we need to meet this uncertainty head on.”

“The world of energy is changing,” added Spencer Dale, BP group chief economist. “Renewables and natural gas together account for the great majority of the growth in primary energy. In our evolving transition scenario, 85% of new energy is lower carbon.”

BP has been undermining itself for awhile now — highlighting how often the right hand of corporations doesn’t know (or care) what the left hand is doing. Specifically, Chief Executive Bob Dudley has often been found to be offering talking points in contrast to actions of his own company — in turn, revealing the country’s sincerity.

In October 2018, Dudley was awarded the Petroleum Executive of the Year award and, in his keynote address, highlighted his concerns with campaigns for increased corporate disclosure and fossil fuel divestment. His false dichotomy was presented as making a decision about “which way to go” between going “the way of people who want to drive a wedge between the energy industry and investors – between oil and money, if you like … Or we could take a different, more innovative and collaborative path. One that recognises many fuels must play a part in meeting the dual challenge – albeit made much cleaner, better and kinder to the planet.”

What were these people wanting to “drive a wedge” doing? According to Dudley, they “push for potentially confusing disclosures, raise the spectre of a systemic risk to the financial system from stranded assets, and campaign for divestment. All in an effort to squeeze oil and gas out of the fuel mix.”

“They are driven by good intentions,” Dudley explained, “but my concern is that their suggested recommendations could lead to bad outcomes, particularly for some of the most vulnerable people in the world.”

In a way, this is exactly what we would expect from the chief executive of a global oil and gas major, but Dudley’s concerns seemed to have been ignored — at least in part — earlier this month when BP announced that it will support a resolution put forward by a group of institutional investors calling for the company to align its business strategy with the goals of the Paris Agreement. The proposal call for BP “to include in its Strategic Report and/or other corporate reports, as appropriate, for the year ending 2019 onwards, a description of its strategy which the Board considers, in good faith, to be consistent with the goals of Articles 2.1(a) and 4.1 of the Paris Agreement (the ‘Paris Goals’)” and lays out the following demands:

This was good news, but the fact that Bob Dudley — the same man who only a few months earlier voiced his concerns with such disclosure reforms — was quoted in the company’s press release. However, when you read his words, it’s clear Dudley remains at odds with the spirit of the company’s announcement:

“Meeting the world’s growing demands for energy while also greatly reducing emissions will require more than rapidly growing renewables – all forms of energy must be made cleaner, better, and kinder to the planet. This is why our people are already in action across BP, seeking opportunities to reduce our emissions, improve our products, and create new low carbon businesses.

“Building an emissions reduction target into the reward of people throughout BP further underlines the importance we place on this work. We expect it will catalyse even more ideas and activity and support BP playing our part in addressing the dual challenge.”

The duality of BP’s promises, therefore, has been met with varying levels of concern and outrage.

“A fortnight ago, BP’s Chair was unbelievably claiming the company’s strategy was ‘consistent with the Paris Goals’,” said Greenpeace UK Oil Campaigner Charlie Kronick, who responded to my request for comment via email. “Today his Chief Economist has blown his cover. BP plans to justify increased investment in fossil fuels by asking investors and young people to bet their lives on yet to be invented technologies. Yet again, BP is shamelessly exploiting the economic needs of developing countries to justify its pursuit of profit while conveniently choosing to ignore that those same countries are already experiencing the catastrophic impacts of fossil fuel driven climate change.

“According to the IPCC – the world’s leading scientific authority on climate change – to meet the Paris goals without the benefits of uninvented technology – we have to reduce oil use by around half by 2030 and be at zero carbon emissions by 2050,” Kronick continued. “Meanwhile BP hopes for a miracle while spending billions looking for more oil and gas, applying to drill for oil in the Mouth of the Amazon. Dale’s view that BP should be considered an ethical investment? Preposterous.”

All of this raises the question, what do we make of BP’s Energy Outlook for 2019? Exactly how committed is BP to supporting the growth of renewable energy it has predicted?

No one is questioning BP’s expertise in this area — and I would further add that we should not necessarily question the intentions of the authors of the report itself. For example, when BP says that global energy demand in its Evolving Transition (ET) scenario — what is effectively the company’s baseline scenario, “which assumes that government policies, technologies and societal preferences evolve in a manner and speed similar to the recent past” — will increase by around a third, “Driven by India, China, and Other Asia which together account for two-thirds of the increase,” we should take BP’s conclusions at face value.

However, when BP predicts that “Renewable energy is the fastest growing source of energy, contributing half of the growth in global energy supplies and becoming the largest source of power by 2040,” we should stop and ask just what BP is really saying, especially when, in the report’s “Key points” section, this prediction is immediately followed by “Demand for oil and other liquid fuels grows for the first part of the Outlook before gradually plateauing.”

There need not necessarily be a lot of predictive crossover between renewables and liquid fuels, but BP also expects natural gas to grow “robustly” across the Outlook, “supported by broad-based demand and the increasing availability of gas, aided by the continuing expansion of liquefied natural gas (LNG).” This seems to hint, somewhat, at BP’s underlying assumptions and calls into question how successful BP believes will be government and sub-national policies to transition away from fossil fuels.

BP presents numerous scenarios in its Outlook, accounting for just about every permutation one can imagine might influence the global energy industry over the next two years. Included is the baseline Evolving Transition scenario, as well as More Energy, Less Globalization, and Rapid Transition. It’s worth noting, of course, that BP has revised upwards its expectations of renewable energy growth against its 2018 Outlook, increasing it by 9% in 2040 — “offset by downward revisions to coal and nuclear — in part as renewables gained share relative to these fuels in the power sector — and to oil.”

Another highlight is BP’s bullish expectations on China. BP cites “the faster-than-anticipated pace of economic adjustment in China” as the most important factor driving revisions over the past 5 years of its Outlook as the country seeks to rebalance “its economy away from energy-intensive industrial sectors” and shifts towards “a cleaner, lower-carbon energy mix.” Specifically, BP’s revisions to China’s industrial and coal demand have dropped by 22% and 37% respectively in 2035.

The shift in China’s fuel mix is also almost entirely responsible for the downward revision to global coal consumption, with China’s shifting fuel mix accounting for approximately 80% of the downward trend. This same shifting energy mix is also responsible for approximately a third of the upward revision to BP’s renewable energy outlook over the past 5 years: “The overall impact on renewables is even greater since the quicker adoption of renewable energy in China helps to drive down the costs of wind and solar energy as they move down their learning curves more quickly, increasing the penetration of renewables in other parts of the world.”

It is difficult, therefore, to know what to make of BP’s Energy Outlook for 2019. BP has been sending mixed messages for years now: On the one hand, it is working hard to ensure the continued prosperity of its business in convincing people their product will be necessary for years to come; On the other hand, the company is making headway when it comes to investing in and supporting a transition to a lower-carbon economy.

Unfortunately for BP, the former undermines any praise the latter might warrant. In the end, then, BP’s right hand appears not to know what its left hand is doing, and for every step forward it takes it takes two steps backwards — somewhat like a circus clown, walking around the ring on his hands and getting nowhere fast.