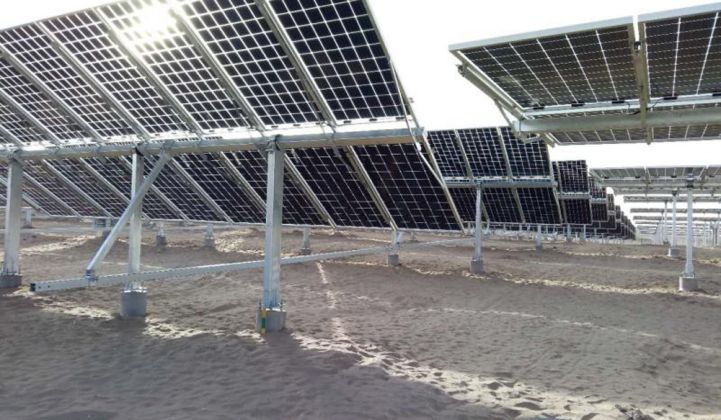 There is no doubt that bifacial modules are ready for their breakout role in the world of solar photovoltaic projects.

By the dawn of 2020, there will be a cumulative 5.4 gigawatts of bifacial solar capacity installed globally, mostly in Asia, according to Wood Mackenzie Power & Renewables’ first report focused on this market. In five years, there will be a nearly equal share of deployment divided among Asia and North America, with cumulative installed capacity growing tenfold, according to WoodMac.

Bifacial modules, as the name suggests, harvest energy from both the front and back sides of the module. The energy gain is largely dependent on the level of light reflected off the ground surface, known as albedo.

The precipitous rise of bifacial technology has been enabled by better system economics, higher energy yield, and more robust modeling and field data. This convergence of factors has provided assurance to developers, operators and financiers looking for solar projects with higher gains at increasingly lower costs.

More power, from every angle

The emergence of bifacial modules has stemmed from large-scale solar developers competing on price, which continues to decline across the globe. While bifacial offers higher power production, traditional front-side-only modules continue to see significant gains as well.

Bifacial passivated emitter rear contact (PERC) solar modules have inherited all of the benefits of one-sided mono PERC technology, paired with their unique higher power output and better reliability. The rise of mono PERC cells across the industry is a major factor in the falling costs for bifacial modules, which are primarily made with mono PERC cells. PERC technology increases cell conversion efficiency by adding a dielectric passivation layer at the rear side of the cell that reduces surface recombination.

Manufacturers can increase efficiency cost-effectively beyond standard multi c-Si levels, building higher-wattage modules and generating more power per square foot in a solar installation. Mono PERC cell capacity will account for half of the total global cell capacity in early 2020s, according to WoodMac.

While bifacial systems may incur a slight cost premium compared to their monofacial counterparts, the significantly higher energy yield expected from bifacial technology can more than offset this impact, providing a much more attractive levelized cost of energy compared to a monofacial system. WoodMac also expects bifacial production costs to fall by another 23 percent in five years.

Field data from LONGi and the Renewable Energy Test Center, for example, shows that LONGi bifacial PERC modules offer an average range of 8 to 20 percent in back power generation gains depending on ground-surface environment. In one field test, for example, asphalt yielded a nearly 11 percent gain with bifacial, while white ground cover resulted in a 15 percent gain.

Bankability comes with time, as most investors want at least a year’s worth of data before making a decision. But there are other important components of building the data set that also bolster bankability. In early 2019, the International Electrotechnical Commission released the standard IEC TS 60904-1-2:2019, which will serve as the common basis for measuring the current-voltage characteristics of bifacial products.

Simulation of bifacial modules in testing environments has also improved significantly. “The experts in the industry think there’s a pretty good correlation between simulations and the field performance now,” said Hongbin Fang, director of product and technology for LONGi. “We have seen more investors getting comfortable [with] bifacial technology and [become] willing to finance the back-side energy yield from bifacial PERC projects.” Since introducing its first-generation bifacial module, HiMO2, to market in 2017, LONGi has deployed more than 2.4 gigawatts of bifacial PERC modules globally.

It is not just module performance data that has to be shown to be accurate in the years ahead. Developers and financiers also need to better understand the seasonality of ground-cover albedo, as well as the optimal racking design and height for bifacial projects to maximize their return on investment. “It’s not just about the modules,” Fang said. “We need to look at it from a system perspective to realize the full potential of bifacial technology.”