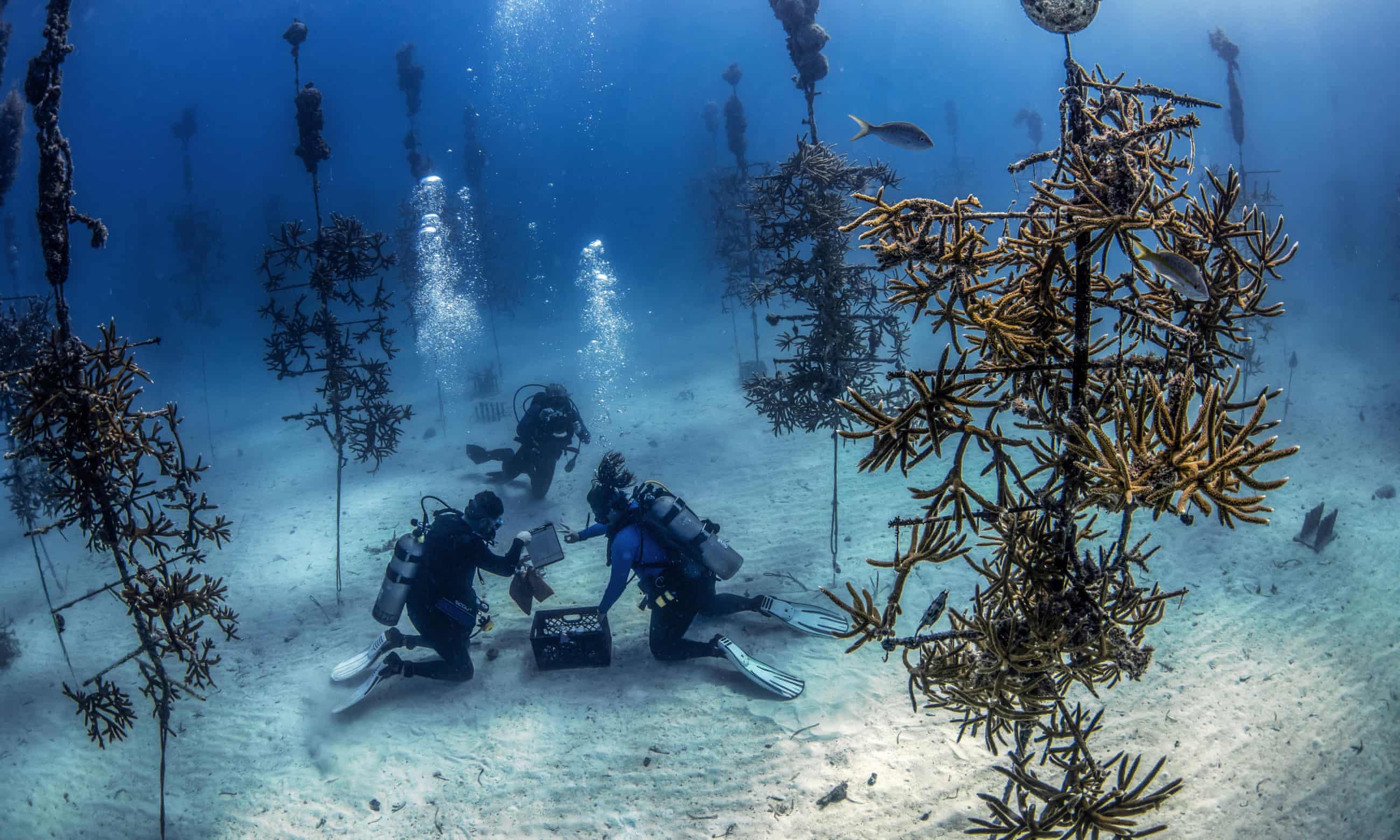 Back from the brink: the global effort to save coral from climate change

As an ocean early warning system, coral reefs have been sounding the alarm for years. They have been bleached white by marine heatwaves and killed off en masse by a combination of factors including pollution, overfishing, acidification and climate change.

But now scientists in Florida, and other tropical locations worldwide, are attempting to stop the rot by creating coral “nurseries” in which young populations can be raised in controlled conditions before being planted on denuded reefs.

Off the southern tip of Florida, a sprawling marine farming operation has been established in which corals are painstakingly grown on anchored fibreglass trees and then planted on the barrier reef.

“The idea is to do as much as we can now to give these coral populations a fighting chance,” says Jessica Levy, programme manager at the Coral Restoration Foundation. “If you don’t put back the material and diversity that has been lost, the populations are going to crash and become extinct. For reefs, you’re looking at a global extinction of the ecosystem if things don’t change quickly.”

Florida has the world’s third largest barrier reef, with nearly 1,400 species of plants and animals and 500 species of fish, but the reef is vanishing fast. Research found that roughly half of the reef has disappeared over the past 250 years. Coverage of acropora, the primary genus of reef-building corals, has plummeted by 97%. “The reef is pretty barren right now,” says Levy.

The maladies are numerous and stretch back decades. A burgeoning Floridian population and mass tourism have led to water pollution and direct damage to corals, while agriculture has sent torrents of nutrients flowing on to the reef.

Although regulations have curbed some of these local risks, climate change remains a big threat. In 2014 a spike in water temperatures led the Florida corals to bleach – when a reef expels its symbiotic algae under heat stress, whitens and potentially dies. It happened again in 2015, as a prolonged global bleaching event gripped the planet’s corals. Australia’s Great Barrier Reef was cooked to the point that it reportedly smelled of death.

The world is on course for a temperature increase that will comfortably wipe out most of the coral ecosystems, a scenario that would strip away a crucial nursery and smorgasbord for countless marine species, diminish fisheries and remove a vital coastal buffer to storms that will intensify as the planet warms.

“The outlook for the Florida reef is pretty grim,” says Kim Cobb, a coral expert at Georgia Institute of Technology. “The threats are overwhelming. Just as the reef is climbing out of decades of systemic problems it is under increasing threat from climate change.”

The Coral Restoration Foundation has increased the replanting of corals as the situation has deteriorated, and the foundation’s underwater trees are becoming sought-after items for stressed reefs around the world.

Partnerships have formed to provide trees to places such as Jamaica and Colombia. A chartered fishing operation in Mexico is in talks to do the same. This month, it was announced that 100 corals had been successfully planted on the Great Barrier Reef, the world’s largest living structure, using the coral tree frames.

The operation came about after tropical fish collector Ken Nedimyer noticed a rare type of coral called Acropora cervicronis growing on his live rock farm in 2003. A loophole in endangered species laws meant the coral was his to keep, so he began cutting it up to grow new coral from the fragments.

Nedimyer hoped to regrow enough coral to start patching up Florida’s reef. Initially, the fragments were mounted on sunken concentric blocks that mimicked reefs. But the real breakthrough came in 2011 with the development of fabricated trees on which dozens of pieces of coral can be dangled from the branches.

Backed by funding from the federal government and concerned donors, the foundation now has around 700 trees arranged in seven nurseries along the reef system as far as Ernest Hemingway’s old haunt of Key West.

Retrieved fragments of wild coral are sliced into finger-sized pieces, sorted into genomic types and strung from the fibreglass and PVC trees, which are anchored to the seabed and buoyed with a float. Alongside the staghorn and elkhorn corals, swaying gently on lines in the currents, are boulder-covering corals that are mounted on nearby platforms.

This environment lets the corals grow three times faster than normal. Even so, it takes up to nine months for them to reach the size of a small football, at which point they are taken to be attached to an appropriate reef using a special putty.

Diversity is key, says Levy. While some other projects are experimenting with heat-resistant corals that can cope with occasionally warming waters, the foundation hopes a range of coral candidates will produce survivors. “We don’t want to put all our eggs in the heat tolerance basket,” she says.

The aim is for the corals to take root, connect and spawn with each other. So far in 2018 more than 18,000 corals have been planted on to reefs, double that achieved annually five years ago. Around eight in 10 planted corals survive at least a year.

This work is laborious and occasionally fraught. The trees need to be regularly cleaned of detritus, while around 300 coral genotypes across nine species must be sorted and tagged. Regrown coral can be swiftly wiped out by hot or cold snaps, storms or disease. Hurricane Irma stripped corals off the trees, although the structures themselves were almost all unscathed.

“We lost a fair bit of stock with Irma,” says Levy. “This work can be very hard as well as very rewarding. You plant corals and watch them grow for several years and then something out of your control like bleaching can happen.

“It just makes us go for the numbers – the more corals we get out there the more diverse it will be and the better chance something is going to survive past the continued stress.”

The largest of the nurseries, located three miles off the Key Largo coast, has around 500 trees, which look a bit like giant, antiquated TV aerials. Branching staghorn and elkhorn coral dangle from the trees just 10ft underwater.

A constellation of marine life, such as trumpet fish, hog fish and trigger fish, flit between the trees. A nearby reef site is dotted with replanted corals bearing the tags of the Coral Restoration Foundation, although the overall coral coverage is scant.

The bleak scene is completed by stands of lifeless pillar coral, ravaged by a bacterial disease that swept through the Keys last summer. A nearby brain coral is split by jagged white lines, further evidence of disease. The origins of many coral diseases are vague but at least one major outbreak has been linked to human faecal waste: the Keys only gained a fully functioning sewer system during the past decade. Recent research has found that these diseases will worsen as the oceans warm.

The scale of the foundation’s task is “monumental”, says Cobb. But the restoration work could help provide a lifeline for reefs, she says.

“Corals made it through the impact that killed the dinosaurs,” she says. “I believe some corals will limp through, the question is how much will be left. There is important work that holds real promise. There won’t be just one solution but a whole basket of them, some of which we can only guess at.”

Another form of reef renovation has been taking place in the Bahamas, where scientists have been collecting material from mass spawning events – when corals release plumes of sperm and eggs into the water en masse – to help produce more numerous, stronger offspring for replanting.

“We’ve had pretty good results,” says Joseph Pollock, coral strategy director for the Caribbean division of the Nature Conservancy. He worked on a recent spawning event off Cape Eleuthera that has resulted in more than one million coral larvae. “This in itself is not a solution, it’s part of a suite of tools that can be used. If you’re not working on stressors from climate change down to coastal pollution, you may as well not be doing this work.”

Back in Florida, the Coral Restoration Foundation is training a new batch of interns, who will help in educational outreach efforts with the public. At the foundation’s offices, fibreglass trees are being scrubbed clean and plans made to survey a nursery site as the skies clear from a tropical storm. The work, much like the morphing climate conditions ranged against it, seems endless.

“I’m not ready to give up,” says Levy. “No one wants these reefs to die on their watch, so I would rather do something then sit back and watch everything die.”