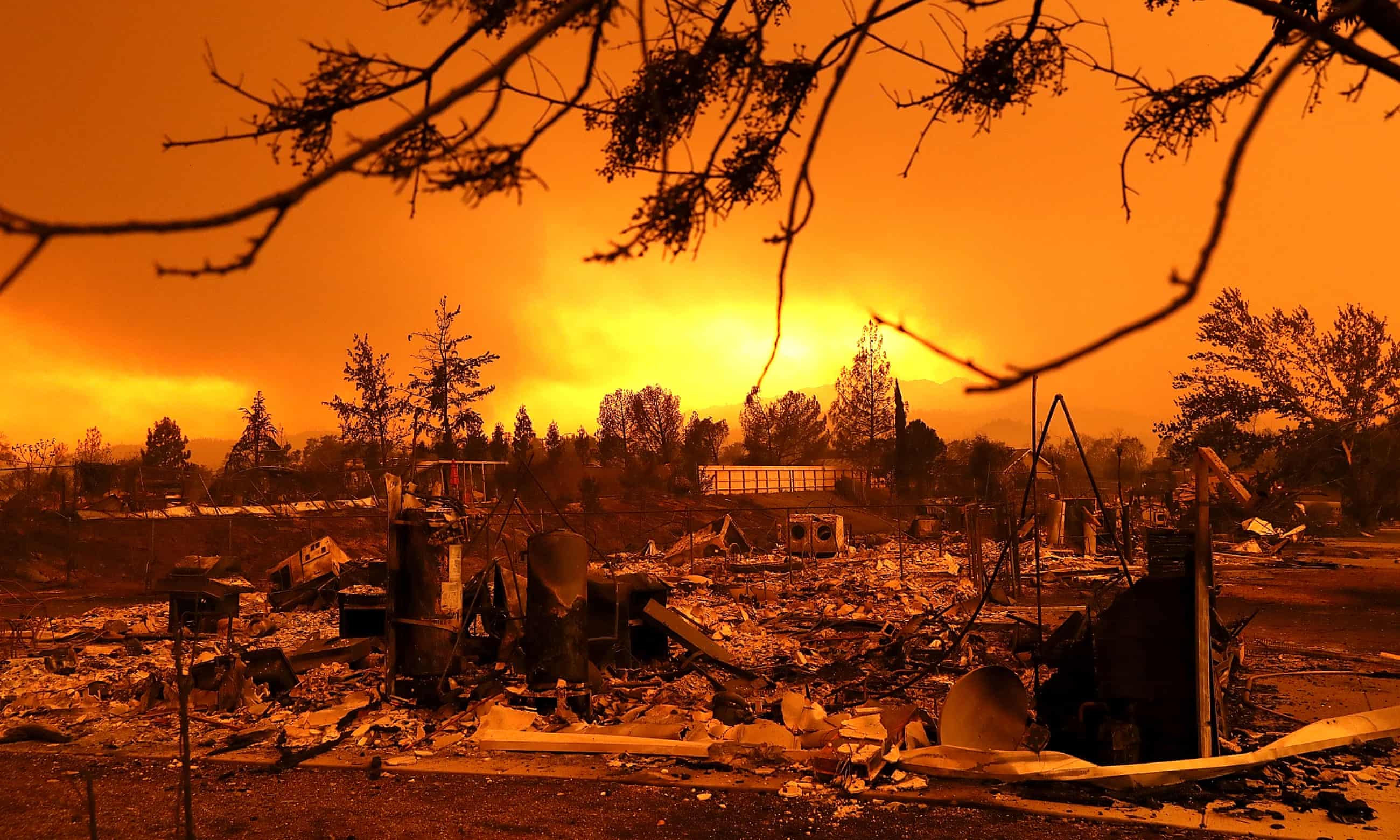 As California burns, many fear the future of extreme fire has arrived

Roger Gray has lived in his suburban subdivision in a quiet California city for 30 years. On Thursday, it was struck by a jaw-dropping geophysical phenomenon.

Gray had defied orders to evacuate Redding, in the far north of the state, which was threatened by the fast-growing Carr fire outside town. He and his neighbors wanted to defend their homes. A navy veteran, Gray worked 10 hours preparing his house and was already exhausted when he saw plumes of smoke in the distance. “Then they started to swirl together, and I’m going, ‘Oh, we’re in trouble,’” he said.

His wife evacuated without him, driving through a maelstrom of smoke and burning tree limbs. Not long after, “it was raining fire”, Gray said. He could hear exploding paint cans and ammunition in the distance; he guessed the flames were 100m tall. “Are we going to die?” his neighbor asked him.

The firenado, a huge rotating whorl of smoke, flame and ash, was upon them.

Recent wildfires in California are notable for their ferocity. At least six people have died, including two firefighters, in the past month in fires that continue to blaze, and 44 died as a result of last year’s wine country fires. The conflagrations have also spawned bizarre pyrotechnics, from firenados to towering pyrocumulus clouds that evoke a nuclear detonation. These events are not aberrations, say experts. They are California’s future.

As of Monday morning, the Carr fire had burned more than 98,000 acres, and containment stood at 20%, with more than 5,000 structures threatened. In the evening, Cal Fire officials began lifting evacuation orders, allowing residents mostly on the east side of the fire to return home.

Awareness of fires “is not just because the news is covering it more”, said Michael Wehner, a senior staff scientist at the Lawrence Berkeley National Laboratory. “More acres are burning. That is almost certainly due to climate change.”

As the climate shifts, so does fire behavior. Summers are longer and drier. Sometimes the winter rains are meager for years, as in the recent five-year drought. Sometimes, like this year, they are torrential, producing explosive plant growth that, several months later, desiccates into prime accelerant. The needle is moving, but where it will stop is anybody’s guess.

“Climate change is continuing to unfold,” said Anthony LeRoy Westerling, a professor of management of complex systems at the University of California, Merced. “The impacts from it will probably accelerate. There won’t be a new normal in our lifetimes.”

He said the Carr fire is one of “a bunch of large fires which have behaved in uncharacteristic ways” in recent years in the west.

Gabriel Lauderdale, a firefighter from Redding, said the rhythm has changed even during his 10 years fighting fires. When he started, sometimes years passed without fires so big that his company was called to help outside their county. “Now, it doesn’t just happen every year, it happens multiple times every year,” he said. He hasn’t been home since 25 June because he has been helping fight fires all over the state.

Lauderdale said he worried about the way these fires strain resources when they get too large, as well as lack of public awareness among city residents – like those in Redding or last year in the wine country city of Santa Rosa – who might not think they are at risk during wildfire season.

Most of all, though, he said he worried about firefighters getting worn down and becoming unable to do their jobs at this intensity for long periods of time, as California’s fire season grows longer. Departments are emphasizing family time and a firefighter’s mental and physical health, he said. Sometimes they bring peer counselors or therapy dogs to especially difficult fire sites.

He hesitated to link the recent firefighter deaths – four in recent weeks, including two at the Carr fire – to fatigue, since each death occurs under different circumstances. But “in 12 months, this is the fifth firefighter death on a fire I’ve been on”, he said.

The fire inspector who died earlier this week in the Carr fire, Jeremy Stoke, was Lauderdale’s friend and teacher, which has made working on the Carr fire especially painful. “There isn’t a way to rationalize it other than – he made a sacrifice for his community and the city he lived in,” Lauderdale said. “There is not easy way to wrap your head around it. I can’t let myself think about it too much. I don’t know if I’d be able to continue if I did.”

Scientists emphasize that climate change is not the only way humans are implicated in California’s astonishing fires and should not be used to “relinquish local or individual responsibility” said University of Oregon researcher Mark Carey. Increasingly, people are building in risky areas, and forest managers have allowed stands to grow too dense.

The most recent victims are still shocked by what they witnessed. Gray was lucky: he was able to defend his Redding home. “We know we’re vulnerable,” said Bernadette Coe, who has lived in a nearby town since 1985. “But there’s never been a fire this close or this fierce”.