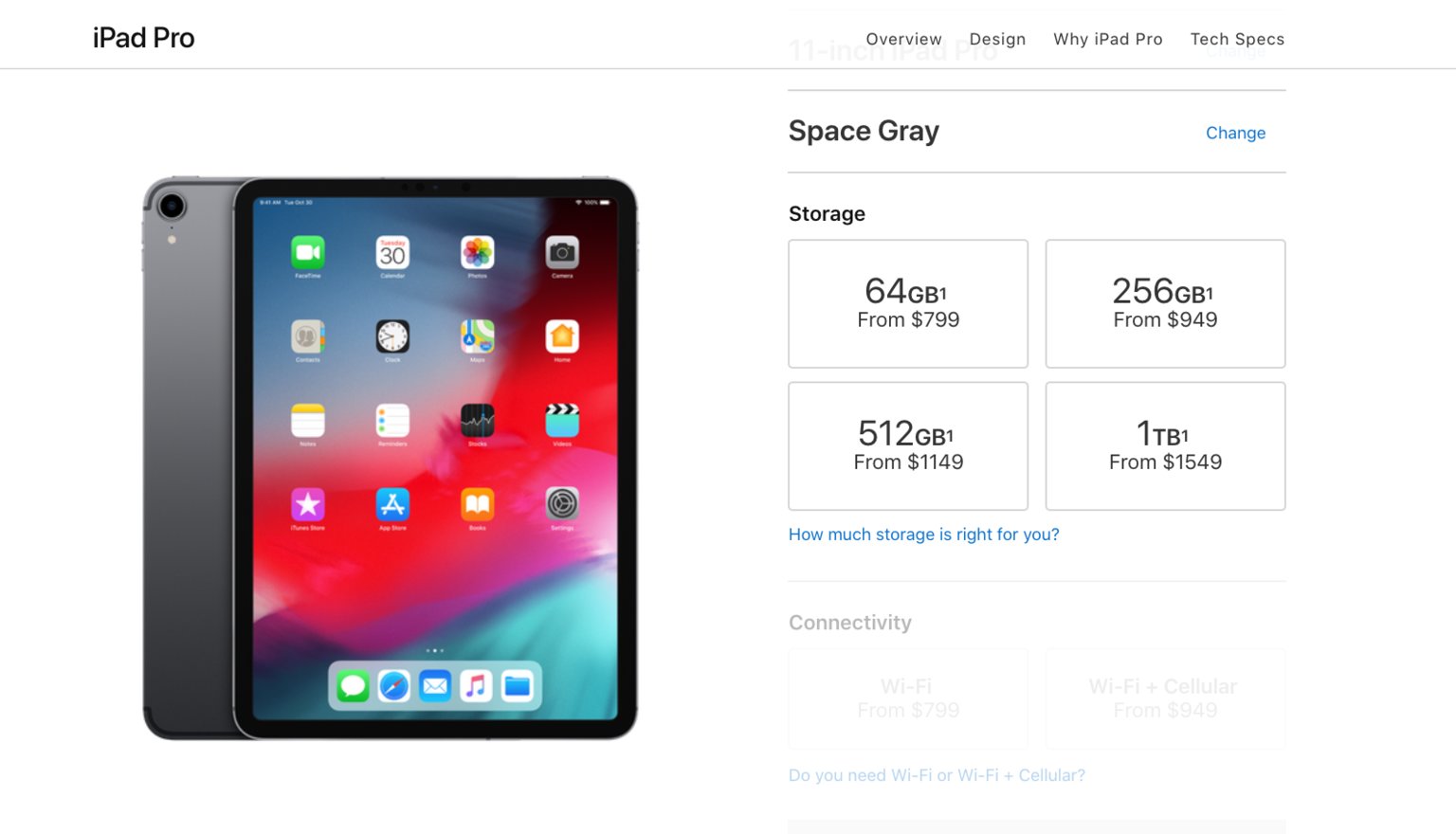 Apple is known for making expensive products, like iPhones and iPads.

The products themselves don’t always start out costly, but one way Apple makes more money from them is by charging for added built-in storage.

The original iPad from eight years ago, by comparison, started at $499 for 16 GB of storage and could cost as much as $699 for 64 GB. These days, you’re getting more storage than ever before — but it will cost you.

Here are the storage and pricing options for the iPhone XS. You have to pay $350, or one-third the price of the phone itself, to get half a terabyte of storage.

And here’s the storage and pricing for the new MacBook Air. You have to pay $1,200 more for max storage, but the computer costs $1,200 to begin with!

And here’s the storage and pricing for the new Mac Mini. You’re paying $1,600 — or double the price of the Mac Mini, which starts at $800 — to reach max storage.

But the historical context of Apple’s storage pricing matters little in the end — customers will only care that Apple’s built-in storage costs significantly more than what you’d find on the market in terms of external storage. Whereas Apple charges customers $750 to get a full terabyte of storage on their new iPad Pro, sites like Amazon and Best Buy list 2 TB external hard drives for as little as $80.

There are benefits to choosing Apple’s built-in storage over external storage, of course. Built-in storage works faster and is generally safer to use, since improperly unplugging external storage drives can result in data loss or damage. But you’ll find that many people are willing to sacrifice a little risk — and a little efficiency — if it means saving hundreds of dollars, especially when you’re getting the same amount of storage at the end of the day for a fraction of the price.

My recommendation: As long as you’re careful and patient, getting storage elsewhere can lead to some big cost savings.

How to get around Apple’s limited storage

If you don’t want to buy Apple’s built-in storage, you can buy an external device, like a hard drive or a flash drive, that plugs into the USB port to give you more room for your files and documents. You can find tons of external storage options from Seagate, Toshiba, and SanDisk on Amazon, for instance.

But that’s for Mac computers. Unfortunately, iOS devices like iPhones and iPads are incompatible with external storage. Even the new iPad Pro that launched this month doesn’t work with external hard drives, despite the move to replace Lightning charging with USB-C.

If you want external storage that will work across your Mac computers and iOS devices, the best solution is cloud storage, which is pretty affordable.

Apple’s iCloud and services like Box, Dropbox, and Google Drive are inexpensive or free, even if you need a ton of storage. iCloud is baked into iOS and makes it pretty easy to find and access your computer files — plus it’s cheap, as you can get 50 GB of storage for just $0.99 a month.

In general, just consider how much storage you’ll actually need before buying a new Apple device with a ton of built-in storage.

You may not need much. If you have an Apple device already, you can see how much storage you’re currently using by visiting your System Preferences in iOS or the “About this Mac” page on your Mac computer. Then figure out how much more you need.

Sometimes the best solution is buying a big external hard drive with way more storage than you’ll ever need and calling it a day. But you might also want to consider cloud storage, which costs a little bit each month but gives you access to your files from more hardware, whether it’s made by Apple or not.