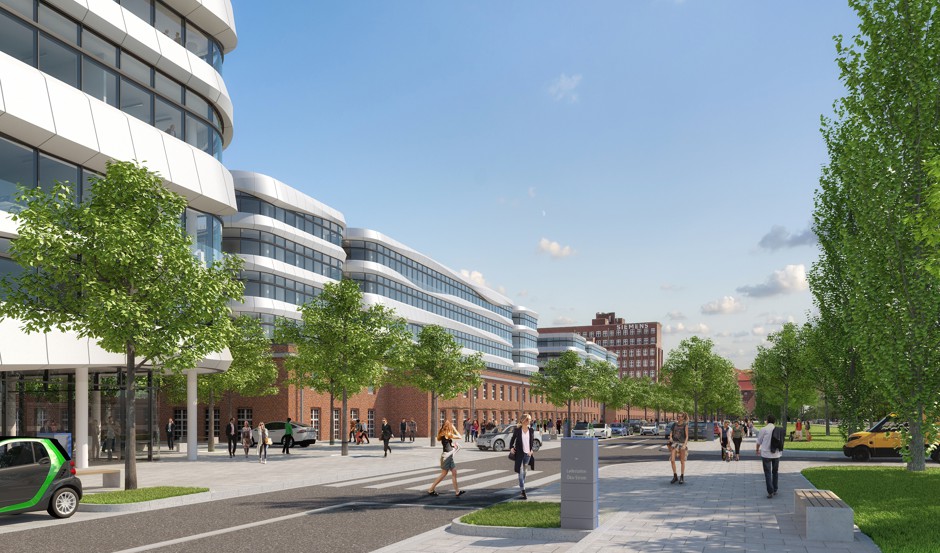 A German City of Industry Gets a Modern Makeover

The German company Siemens is launching an ambitious adaptive reuse project to revitalize its historic corporate campus, with a modern data-collecting twist.

BERLIN—Right now, it’s hard to imagine what Siemensstadt will eventually look like. Surrounded by old brick factory buildings and shuttered offices, the area sits at the intersection of two large roads in a neglected northern outskirts of Berlin. Cars speed by faster than they should; every now and then, a solitary traveler emerges from the underground train station. Owned by the industrial giant that gave the suburb its name, Siemens, the 50-acre site doesn’t give off much of a sense of community.

But Berlin’s new mega-project aims to change that. Over the next decade, Siemens will spend more than €600 million to create what it’s been calling “Siemensstadt 2.0,” a “smart city” project with research facilities, space for startups, logistics centers, and a new production facility—the company’s largest worldwide—geared towards renewable energy, transportation, and digital infrastructure products. Along with its new campus, the company is also creating something of a neighborhood: Some 3,000 new apartments are on the way, plus kindergartens and schools, green spaces, and restaurants, hotels, and retailers. An abandoned railway line nearby will be revived, connecting travelers to Berlin’s new (as yet unfinished) airport in just 40 minutes.

Among those who live in and around Siemensstadt today, there’s a lot of excitement about the investment and jobs that this adaptive reuse project is promising—but there are also some mixed feelings. Recently, Google retreated from its plan to build a tech campus in another Berlin district, Kreuzberg, after a storm of community resistance. Further afield, a sensor-laden “smart city” development masterminded by Sidewalk Labs has faced similar controversy in Toronto. Thanks to the dramatic changes that technology giants in California have wrought in their nearby communities, there’s no lack of comparisons that raise concern about what Siemens’s gigantic redevelopment may mean for Berlin.

The company’s history in the northeastern Berlin suburb named after it goes back more than 120 years. Much of the site slated for redevelopment has been owned by Siemens since 1897. During the first half of the 20th century, the company built housing and other community facilities for the workers once employed here. Connected to the rest of Berlin via a 4.5-kilometer railway that Siemens built, Siemensstadt peaked at 90,000 staff working and often living nearby in the years before World War II.

With Berlin split in two after the war and surrounded by Soviet-dominated East Germany, Siemens gradually relocated, eventually establishing a new headquarters in Munich and selling off subsidiaries. As the economy has deindustrialized, the site has shrunk, buildings have become outdated, jobs disappeared, and the surrounding neighborhood has grown poorer.

Around 11,400 staff still work here, making, among other things, steam turbines, substation equipment, and huge dynamos. But over the past few years, the company has instituted several rounds of layoffs. Siemensstadt is not the poorest suburb in Berlin, but recent reports by city authorities describe the area’s social situation as “continuously worsening.” Most of its 13,000 inhabitants no longer work in the Siemens factory and offices.

“The old people start talking about the good old days, when Siemens was in charge: kindergartens, schools, jobs, clubs and apartments—everything was Siemens,” Lutz Oberländer, a neighborhood historian who has published a book on the district, said in an interview with Tagesspiegel, a local newspaper. Even when he moved here in 1999, almost everyone still worked for the company. “Now there’s a new generation of families here, and hardly anybody works for Siemens.”

In late 2018, Siemens and an eager Berlin city government signed a statement of intent. The city agreed to spend half a million euros on updating surrounding infrastructure and this summer, Siemens asked 15 architecture firms to come up with ideas for the new neighborhood’s layout. Construction could start as early as late 2021. “There’s a fence here now,” Yashar Azad, a Siemens spokesperson, told CityLab on a recent tour of the site. “But that will be gone eventually. There’s a lot of unused space here and we want to open everything up.”

Some locals are cautiously enthusiastic about the opportunity the project could represent for the struggling area. Klaus Abel is the head of the local branch of Germany’s biggest union, IG Metall, which represents many of Siemens’ current metalworking employees. In a statement, he welcomed the project, saying it would bring jobs—but Abel also added that it was important for “Siemens to take their staff with them into this new world of work and train them.”

Other residents have expressed a familiar set of concerns about traffic and construction noise, a district politician, Daniel Buchholz, told a local newspaper. The threat of gentrification also looms large as highly paid tech workers move in. “The rents will go up,” one local told a reporter.

District leaders have commissioned a study to see whether Siemensstadt and another nearby district, Charlottenburg North, should be subject to special Berlin zoning laws created to protect neighborhood character and prevent gentrification. Berlin city councilors have recently been arguing about capping rents for the next five years and there are strict rules on rent controls and historic buildings as well as regulations designed to safeguard unique community characteristics.

Compounding both the concern and the enthusiasm is the nearby Tegel airport project. Once this airport is decommissioned in favor of Berlin’s new, long delayed Brandenburg airport, it too is slated to become something of an IT hub. Tegel’s “Urban Tech Republic” development and Siemensstadt 2.0 are only around six kilometers apart and will form a corridor in Berlin’s north west. City planners estimate 20,000 jobs will be created between the two projects, as well as housing for 25,000.

“It’s not unlikely that Siemens sees their smart city as a lighthouse project for data protection.”

Such tech-driven development projects in the U.S. have faced fierce criticism for alienating locals rather than benefiting them. In New York City, Amazon ended up withdrawing its plans for a second headquarters due to anti-tech backlash; all around the Bay Area, the unbridled growth of the industry has contributed to a dire housing shortage. Azad stresses that Siemensstadt 2.0 will be different. “We are placing a lot of emphasis on regular dialogue and we are reaching out to church groups, sport clubs and schools,” he said. “We are also planning to include locals in the architectural competition, where they can express their wishes and concerns to the jury [deciding on the winners].”

Siemens is determined to be a good neighbor in Berlin, says Cedrik Nieke, a Siemens board member who is helping lead the project. In San Francisco, the tech boom “pushed normal society right out,” he says. “We have to ensure that that doesn’t happen here.” The name of the development is also something that the local community will decide together, and 30 percent of the apartments Siemens is building will be reserved for low-income tenants. He’ll be personally invested in the prosperity of the area: Nieke said that he would like to move there eventually, too.

It’s early in the process, but some locals are not fully convinced that the company will live up to its promises. “Only time will tell whether Siemens really is interested in cooperating. Up until now, that’s not the impression we have had,” said Helin Evrim Sommer, a member of the federal parliament for Spandau and a spokesperson on urban development for the Left party. A group of concerned citizens established a planning workshop in March and it has been meeting regularly at her office since then. But so far, she points out, “there’s only been one public information evening organized by Siemens.”

If the company really wants to open up the site, they need to integrate into the community, not just expect the community to integrate with them, she stresses. A local blogger, Rebekka Kurpiers-Stahl, has echoed those concerns about transparency and inclusion in her well-read community newsletter.

But even critics of Siemens don’t expect a rerun of Berlin’s Google campus controversy of 2018. That conflict arose when the U.S. data giant wanted to open a startup center in the Kreuzberg neighborhood; after months of protests, Google backed out. While there are some parallels between the two projects, there are also key differences. Kreuzberg, a thriving and increasingly trendy neighborhood near the center of the city, doesn’t need much help attracting residents. Siemensstadt is almost the opposite.

“Firstly, I think Siemens is smarter than that,” a local politician, Hans-Ulrich Riedel, told local broadcasters. “Secondly, a lot of local people have a lot of hope for this project.”

One issue that could have an impact is Germany’s stringent personal data and privacy law: the General Data Protection Regulation, or GDPR. That will determine what information a so-called smart city can collect about residents. Siemens’ project head, Karina Rigby, has described what she calls “laboratories in reality” as being “at the heart of Siemensstadt 2.0.” Said Azad: “This will be a huge showroom for our technology.”

Does that mean the residents will be Siemens’ lab rats? The project is at such an early stage that it’s impossible to know yet, but he stressed that the company has no plans to harvest data from private individuals. “That is not part of Siemens’ business,” he said. Rather, it intends to merely showcase and test its infrastructure capabilities.

That explanation is a little too simplistic, according to Maximilian von Grafenstein, a co-leader of a research program at the Alexander von Humboldt Institute for Internet and Society that, among other things, researches data privacy in smart cities. The GDPR has extremely broad definitions of who is responsible for processing individuals’ data. It would be nearly impossible for Siemens to “only” provide infrastructure and keep completely out of processing data, von Grafenstein said.

But he believes that Siemens has good intentions in the privacy arena. Not only will they have to abide by the GDPR, but they are also well aware of local sensitivities around data privacy as well as a culture that’s keen on following the rules

“I would say [potential inhabitants] don’t have to be wary, they just need to be aware,” he told CityLab. “I would be really surprised if Siemens wasn’t savvy enough to ensure that it was GDPR compliant.”

In fact, von Grafenstein points out that GDPR-compliancy be a competitive advantage. If consumers know a company boasts a reputation for rigorous data privacy, they could prefer that company over competitors. “It’s not unlikely that Siemens see their smart city as a lighthouse project for data protection,” he said

To achieve that, von Grafenstein thinks that Siemens needs to start work on this aspect as early as possible. “So many different stakeholders have to cooperate to build something like this up in a GDPR-sustainable way. It’s very complex,” he said. Companies can’t build up those systems of governance in retrospect; they must be designed in at the very start of the project, he argued.

That call for Siemens to engage with outside stakeholders, including residents, as it develops its plans was echoed by Cordelia Polinna, a specialist in strategic urban planning and managing partner at Urban Catalyst, a Berlin studio specializing in cooperative city spaces. That means going beyond just reaching out to a few community groups, she said. “Siemens needs to find as many synergies as possible with the local community early on, to ensure they don’t create an enclave,” she said. “They should be approaching the community as equals—the neighbors will have a lot of local knowledge and that can be very helpful.”

Will Siemensstadt 2.0 be a good or bad neighbor? When it comes to privacy, economic inclusion, or access to jobs, the most important thing is that the company learn from the mistakes that other tech titans have made when they venture into smart-city-building.

“It depends on what Siemens is actually planning,” said the Left’s Sommer. “Their plans must clearly show that this isn’t just going to result in more gentrification, new versions of private transportation, and more surveillance.”