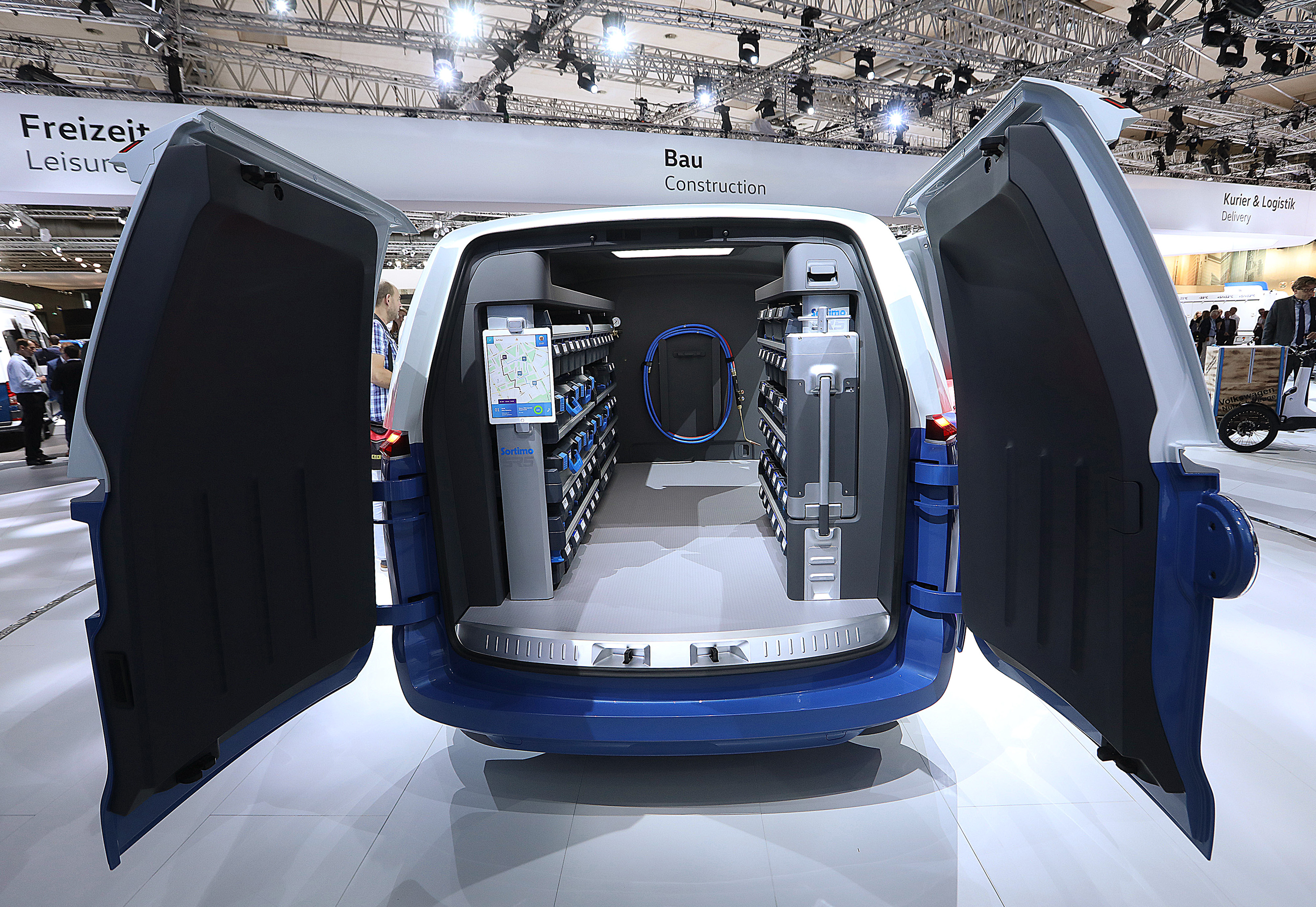 VW reimagines the microbus as an all-electric cargo hauler

The slow roll towards electrified vehicles isn’t isolated to passenger cars and SUVs. Manufacturers are investing in commercial vehicles as well — everything from school buses and delivery vans to big commercial trucks.

VW Group’s vision for an electrified commercial vehicle future also includes a microbus. The automaker’s commercial vehicles unit unveiled five zero-emission vehicles at the 69th IAA Commercial Vehicles show in Hannover, Germany. Among them is an all-electric cargo van that’s meant to be the commercial equivalent of the I.D. Buzz microbus revealed in 2017.

The others include a commercial-grade cargo e-bike, an electric concept van called the Crafter HyMotion that’s powered by hydrogen fuel cell system, a Transporter concept van with a 48-volt mild hybrid drive system that combines a turbodiesel engine with an electric drive and finally, the ABT e-Caddy, a small van that will to arrive on market in mid-2019.

Some of these concepts such as the hydrogen fuel cell Crafter HyMotion are far from hitting the streets. The Crafter HyMotion concept 3.5-ton van is equipped with a hydrogen tank that enable a total range of about 217 miles.

“This is still a concept vehicle, but the technical concept is already near-production,” Heinz-Jürgen Löw, head of sales and a board member of Volkswagen Commercial Vehicles said in a statement.  “We are conducting an intensive cost and benefit analysis to determine its market potential. The Crafter HyMotion with a fuel cell drive is absolutely a beneficial addition to our drive portfolio of petrol, diesel, natural gas and electric motors.”

The microbus with its 1970s hippie-turned Jetson-vibe is of course the show stopper, which VW describes at the “ideal vehicle for the urban traffic of tomorrow.” And unlike many other concepts, a version of this one might actually make it into production. The company said it could be launched into the market as early as 2021, a year ahead of the passenger version unveiled last year.

The I.D. Buzz cargo microbus concept is equipped with 20-inch wheels (smaller than the I.D. Buzz passenger van) and a solar roof that can extends the battery’s range another 9 miles a day.

It also wide-opening rear wing doors, a new rear bumper and  is equipped with a “connected” system that allows all items on its interior shelves to be tracked. Users can unlock the vehicle from the outside via a sensor that recognizes authorized persons via a digital key which is sent to the van from a smartphone.

The cockpit has all the futuristic leanings you might expect with information like navigation projected in #D via an augmented reality head-up display and a portable tablet where the infotainment and climate control functions are housed. The main controls for driving are located on the steering wheel.

The concept also has autonomous driving capabilities, although it’s unclear if this technology will make it into a production version.

This isn’t the first microbus concept VW has shown off in recent years. There was the BUDD.e, which was introduced in January 2016 at CES. BUDD.e was intended to show the world that VW was serious about electric vehicles in the wake of the diesel emissions scandal that has led to arrests, jail sentences and fines.

The following year, VW unveiled an electric all-wheel drive microbus called I.D. Buzz, a futuristic take on the family camper van. The I.D. Buzz will go into production starting in 2022.

While the diesel emissions saga drags on, VW is pushing slowly ahead with its electric vehicle plans. VW Group’s board agreed in June 2016 to transform its core automotive business to focus more on electric vehicles, autonomous driving technology and launch mobility services such as shuttle on demand and ride hailing. Up to 25% of new vehicles under VW Group — a portfolio that includes Audi and Volkswagen Passenger Cars — will be all-electric under the board’s Strategy 2025 plan.

Those electric ambitions (and investments) doesn’t translate into an exodus of diesel — at least on the commercial vehicle front.

Thomas Sedran, board chairman of Volkswagen Commercial Vehicles, said  that despite progress made in the electrification of its products, the business unit would continue to rely on highly advanced diesels as the backbone for logistics, particularly vehicles that make long distance runs, in rough terrains and for heavy loads.