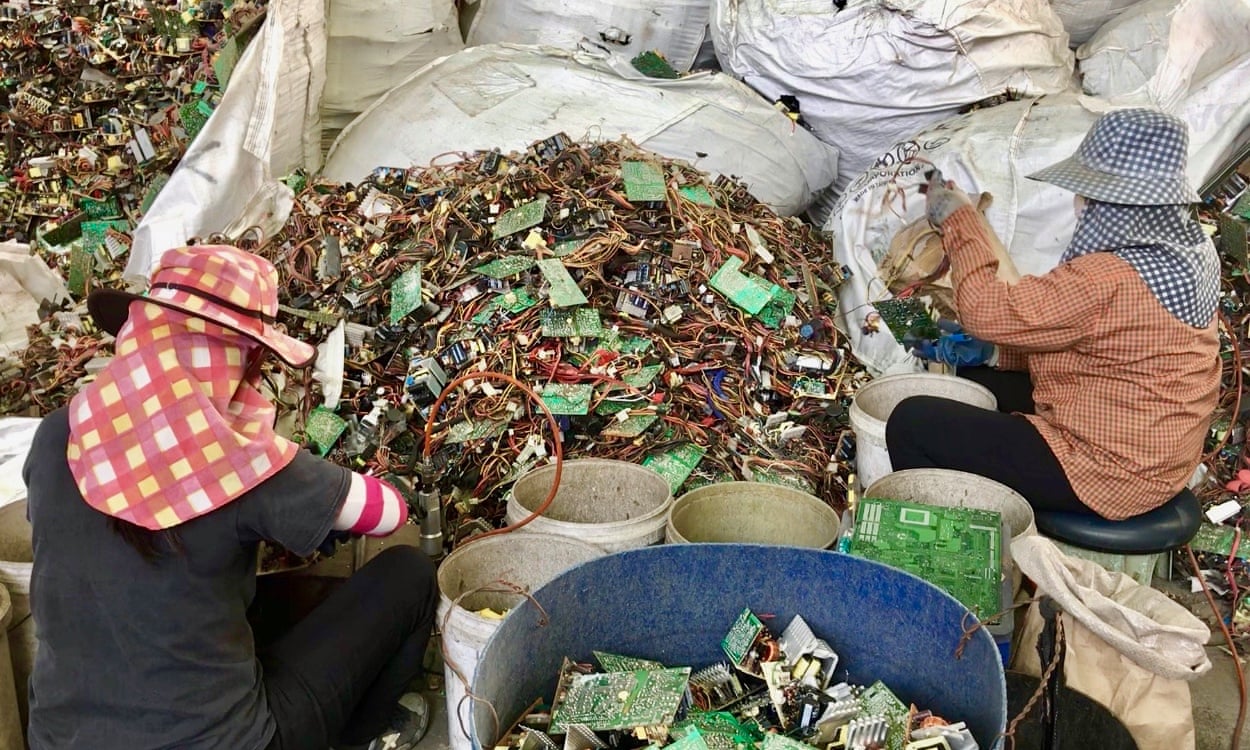 The UK is the worst offender in Europe for illegally exporting toxic electronic waste to developing countries, according to a two-year investigation that tracked shipments from 10 European countries.

The investigation by the environmental watchdog the Basel Action Network(BAN) put GPS trackers on 314 units of computers, LCD monitors and printers placed in recycling facilities in 10 countries. Researchers mapped what they said was the export of 11 items to Ghana, Nigeria, Pakistan, Tanzania, Thailand and Ukraine.

Electronic waste is deemed a hazardous waste by the EU due to toxic parts containing substances such as mercury, lead and flame retardants. Exports of this type of waste to non-OECD and non-EU countries are illegal under EU law.

The UK was the top of the list of suspected illegal shipments. Five computers and LCD monitors were shipped to developing countries after they were tracked and placed in council recycling centres across England and Scotland.

Ireland, Denmark, Italy, Spain and Germany also exported electronic waste to developing countries in what are suspected to be illegal shipments, the report said.

By extrapolating the illegal exports with figures on electronic waste generation throughout Europe, the report estimated that 352,474 metric tonnes of electronic waste was being illegally shipped from the EU to developing countries each year.

Jim Puckett, director of BAN, said the illegal shipments perpetuated an EU waste management regime “on the backs of the poor and vulnerable”.

“We have discovered a very significant stream of illegal shipments of hazardous consumer electronic scrap to vulnerable populations,” he said.

“This flies in the face of EU claims to make continuous efforts to implement a circular economy which can only responsibly exist by eliminating … leakage from the system.”

The UK’s shipments went from council recycling facilities to Nigeria, Tanzania and Pakistan.

“However, our challenge is vast. Detecting illegal waste shipments is the ultimate hunt for the needle in a haystack, and this is where partnerships allow us to extend our reach and effectiveness. By providing the Environment Agency with an early insight into their tracker deployment, the Basel Action Network enabled us to quickly and efficiently close down four illegal waste operators who exported the electrical waste containing their trackers.”

Africa was by far the region of the world most targeted by EU e-waste exporters. The continent received seven exported units (five to Nigeria, one to Ghana, and one to Tanzania) of tracked equipment – 64% of the shipments leaving the EU.

The report said that due to the lack of proper waste management in the recipient developing countries, including open burning of e-waste, there was likely to be local contamination of crops and threats to humans from the illegal exports.

Far more should be done, the study said, to prosecute the robust illegal trade, including working with target countries to stem the toxic tide.

“The export rates identified in this study … remain far too high when one considers that we have only been able to put an eye on the tip of an iceberg of the vast quantities of toxic [e-waste] generated per annum in the EU,” said Puckett. “When extrapolated, as we have shown, the figures represent truly frightening amounts of EU leakage.”

Puckett condemned lobbying by the electronics manufacturing industry, which is attempting to create a loophole in the Basel convention to allow broken, low value electronic scrap to flow from Europe on the grounds that it will be “repaired” in developing countries. He urged the EU not to agree to the loophole.

“The answer to criminal activity is not legalising that activity but improving the enforcement to ensure the future health of Europe is not dependant on poisoning the rest of the world.”

In the last two years the rest of the world has increasingly begun to act against imports of rubbish and waste from Europe. China banned the import of millions of tonnes of plastic waste last year.

Thailand – one of the countries to which illegal shipments were found to have been made – acted in June 2018 to stem the flow of e-waste being imported after concerns it was becoming the dumping ground for the world.

Other countries have also begun to restrict waste imports from European countries.

The Guardian recently revealed concerns over illegality and fraud in the plastic recycling export industry in the UK as the impact of the import bans created a crisis in UK recycling.