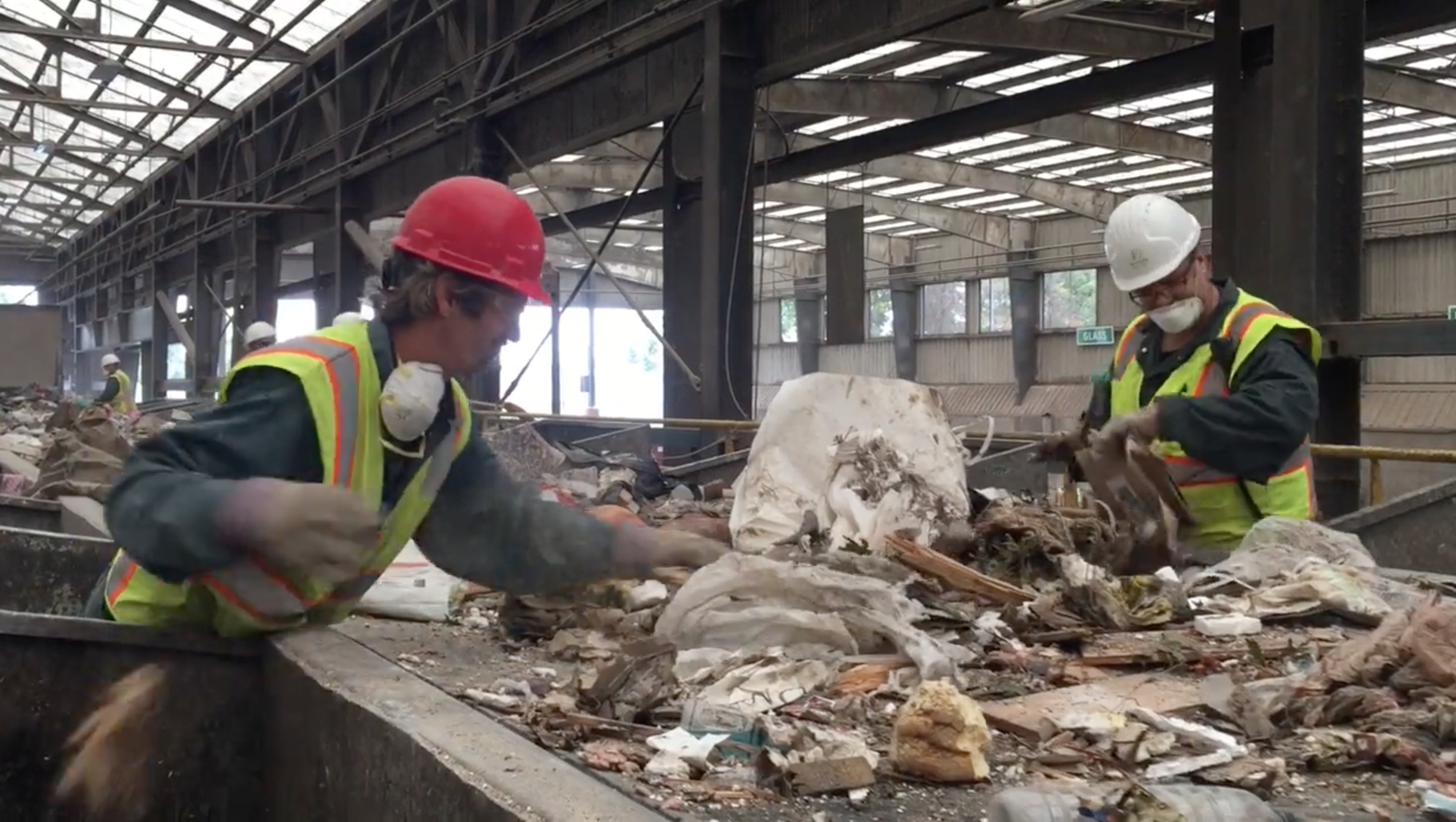 Humans have been building machines to separate waste into different streams of different value requiring differing processes for decades. Until recently, we were mostly failing to do it well enough to be worth the investment. Instead, millions of people globally manually sort trash, sometimes with developed country workplace safety standards, sometimes living in developing country trash fields and scraping a living out of them.

In London in the 1850s, when the population was roughly 3 million, a thousand rag and bone men plied their trade, greasy bags over their shoulders or slung on rough carts, picking through the detritus of the city to find enough items of value to allow them to pay for their lodging and food.

Now, there’s a Global Alliance of Waste Pickers. In 1988, the World Bank estimated that 1-2% of the global population made most or all of its living picking through waste. Of Brazil’s 209 million citizens, 250,000 are full time waste pickers. Many of these people live in poverty and work in deeply unsafe conditions.

In this context, China was a global destination for the developed world’s waste. The country accepted containers of waste, sorted them with their millions of hands, and turned the waste streams into recycled plastic and the like which they shipped back in new products. But no more. In 2017 and 2018, China stopped accepting 56 types of common solid waste, from plastics to steel scraps, saying that they are too poorly sorted and as such unacceptably expensive to sort into trash versus valuable items.

The global recycling industry is demanding higher quality inputs before it will accept recycled goods, and in the developed world where much of the waste originates, the economics don’t support motivated, intelligent workers producing high quality sorting streams. As a result, borders are being shut.

Enter robots and machine learning, specifically AMP Robotics out of Colorado. Where automated sorting machines have been failing, especially with the highest value waste, AMP is succeeding.

The company recently gained another round of funding with investors such as the Sequoia and an Alphabet offshoot, Sidewalk Infrastructure Partners, bringing its total funding to close to $20 million over its nearly 5 year history.

More importantly, the company is installing waste sorting robots. Most recently, it installed 14 systems at a recycling facility in Florida, to add to its installations in California, Colorado, Indiana, Minnesota, New York, Pennsylvania, Texas, Virginia, and Wisconsin.

Their current level of quality is claimed to be twice the speed and much higher accuracy than human sorters. And they don’t need coffee or lunch breaks. The economics are adding up to automation of the waste separation process.

So how do they do this? Well, machine learning of course. This is part of the CleanTechnica series on the use of this disruptive technology in the cleantech space. To that end, I asked AMP a few questions about how it is applying the technology.

The company confirmed that it is using classical robotic control approaches for the mechanical arms and machine learning for identification. As people who have been reading along with the CleanTechnica series know, machine learning is starting to get into control, but the vast majority of robotics and autonomously operating moving things are controlled through prescriptive code. The arms are guided to move to a piece of plastic and to invoke suction not by a neural net, but by a lot of code.

Where the machine learning comes in is establishing the targets for the robotic arms, identifying which elements of the waste stream need to be picked. That’s been a key place where machine learning has grown by leaps and bounds. As was earlier pointed out, the state of the art for machine learning identification in 2012 was capable of about 60% correct identification of dogs versus cats, while in 2018 it’s possible to train a system in a few minutes that achieves 96% accuracy in identifying specific dog and cat breeds.

A lot of that comes down the work of three leaders in the field who recently shared the $1 million Turing Award, Yoshua Bengio, Geoffrey Hinton, and Yann LeCun. They split their time between academia and leading companies such as Google and Facebook. They found ways to create hierarchies of identification within neural networks, architecting solutions that resolved all of the lower level information into more and more useful abstractions until any images could be put into a system which already understand feathers and corners and colors to enable rapid training of the last mile.

AMP Robotics doesn’t leverage RetinaNet, one of the primary reusable neural net stacks, but has developed its own equivalent. Its technology has improved in lockstep with the rest of the industry. Initially it was managing 70% recognition and purity, and currently it is in the 98% recognition and 95% purity rate.

This still isn’t at the level that China now requires, as its demand for recycled goods is a 99.5% purity rate, something that’s both far beyond human sorting economically viable capabilities, and currently out of reach of AMP’s solution as well. But the leap from 70% to 95% tells the story of speed of advancement.

As one example, its technology is sophisticated enough with electronics streams to identify chip SKUs and automatically pick high value processors and components that can be immediately reused.

There’s a cautionary note here. AMP achieved its recognition and purity targets in 2017, after two years of effort, but progress on those metrics has slowed. What it has been doing is widening its portfolio to new waste types and environmental conditions. Its machines achieve those impressive figures under a much greater degree of temperatures, lighting levels, and types of waste now, so robustness and market expansion have been clearly achieved.

And of course the reason for the improvement is continuous reinforced learning. Just as with the IoT plus neural net water quality solution CleanTechnica published about earlier this year and as with Tesla for its autonomous cars, AMP Robotics maintains a common Cloud learning platform. All systems from all deployments come to the common Cloud, with the AMP team constantly improving the accuracy of its overall solution. And as with all solutions, the better recognition models are available to all installed devices. What is learned from one customer deployment becomes automatically available at another customer.

Machine learning is a technology that allows a device bought today to be more effective tomorrow, which is an experience that Tesla’s customers continue to enjoy.

There’s another takeaway from the image pulled from one of its videos. AMP’s systems work not on the pre-sorting line, where there is often a very large variance of size and mass of elements, but on the sorting line after the pre-sort. And it also isn’t taking in construction and demolition waste directly in many cases. The company has worked with Ryohshin of Japan to developed robotic systems that work with chunks up to 40 kg, but in many cases construction waste is shredded and broken down to pieces that are easily dealt with by its standard robots, which are both smaller and faster.

For decades, the developed world used labor arbitrage to sort high value waste out of low value waste by shipping it to foreign countries with lax environmental laws and cheap labor. Those days are coming to an end.

An example close to my home in Vancouver BC is a long-running dispute that was finally resolved this year. In 2013 and 2014, 103 containers supposedly containing recycled plastic left the port here for processing in the Philippines. They were discovered to contain unsorted household waste, a common problem. Instead of throwing it in landfill in Asia, it turned into an international diplomatic concern.

Both the Philippines and Canada are signatory to the Basel Convention on the Control of Transboundary Movements of Hazardous Wastes and Their Disposal. The shipments contravened the Convention, and the requirement is that the sending country must take it back. That took years to resolve, as Ottawa and the Philippines took this through the courts. Storing the containers cost tens of millions of dollars. Finally, this year 69 containers were shipped back to Canada, with the remainder having been paper that was safe to leave the Philippines. In June 2019, the waste ended its six years abroad, returning to the Port of Vancouver for disposal.

It’s no longer possible for the developed world to use the developing world as its landfill site and recycling facility. AMP Robotics is at the forefront of systems which are allowing us to sort our own waste more effectively. We’re still a long way from Sweden’s success rate, where less than 1% of household waste enters landfills, but we’re improving.