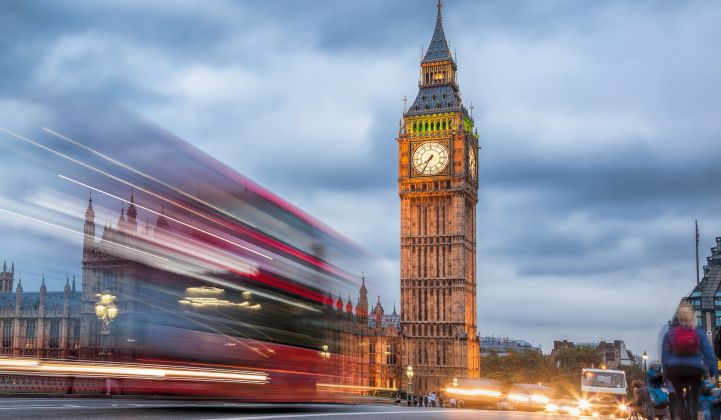 Every new home with a parking space would be required to install an EV charger with a universal socket.

New homes and offices in England would be required to install electric vehicle chargers under a proposal called a “world first” by the U.K. Department of Transport.

Under regulations set to take effect in the first half of 2020, every new home with a dedicated parking space would be required to install an EV charger with a minimum power output of 7 kilowatts and a universal socket for all makes of electric vehicles.

The regulations will see:

Part of the government’s justification for the EV charger mandate is the significant cost savings that come with installing EV chargepoints in new buildings at the outset.

An existing government incentive that provides homeowners up to £500 ($614) to install EV chargers has funded the installation of nearly 100,000 chargepoints.

“We’re definitely seeing more governments look at the role that building codes can play in driving EV adoption,” Colin McKerracher, head of advanced transport at Bloomberg New Energy Finance, wrote in an email. “Much of this has been at the city level so far, but as momentum behind e-mobility continues to grow, we expect to see more national plans like this taking shape.”

“The impact of these policies will vary dramatically depending on how fast the building stock is changing,” McKerracher said. “Only a small percentage of total European or North American buildings are renovated versus a much higher share in markets like China or Southeast Asia.”

“Still,” he said, “this is an important part of the suite of policies emerging to help enable higher levels of EV adoption.”

U.K. EV sales on the rise

The U.K. is seeing record EV deployment even as its overall new car market declines.

According to the latest data from the Society of Motor Manufacturers and Traders, total new car registrations in July 2019 were down by 4.1 percent compared to the same period in 2018. Registrations of new battery-electric vehicles, meanwhile, were up by 158.1 percent and accounted for a record 1.4 percent monthly market share.

The country’s new EV charging regulations are an outgrowth of the government’s “Road to Zero” strategy released last year. The strategy calls for 50 to 70 percent of new cars sold to be “ultra-low emission” by 2030 and for all new cars and vans to be zero-emission by 2040.

Last October, the government scrapped consumer incentives for plug-in hybrid electric vehicles and lowered the incentive for all-electric vehicles from £4,500 ($5,522) to £3,500 ($4,295), but it is targeting innovation in charging infrastructure, as well as requirements to streamline consumers’ EV charging experience.

The government has called for all newly installed EV fast chargers to accept debit or credit card payment by spring 2020, and it wants all new private EV chargers to be equipped with smart technology enabling EVs to respond to price signals and charge during cheaper off-peaks hours.

Oil majors are entering the charging space, with Shell recently installing the U.K.’s first 150-kilowatt EV fast-charger at a gas station. Shell, with its partner Allego, a Netherlands-based EV charging supplier, installs fast chargers at its gas stations as part of the Shell Recharge service.

Efforts to expand the nationwide EV charging network recently enabled the U.K. to reach a deployment milestone. According to Nissan U.K., there are now more public EV charging stations in the U.K. (9,300) than gas stations (8,400), with 1,600 of the stations offering fast chargers.