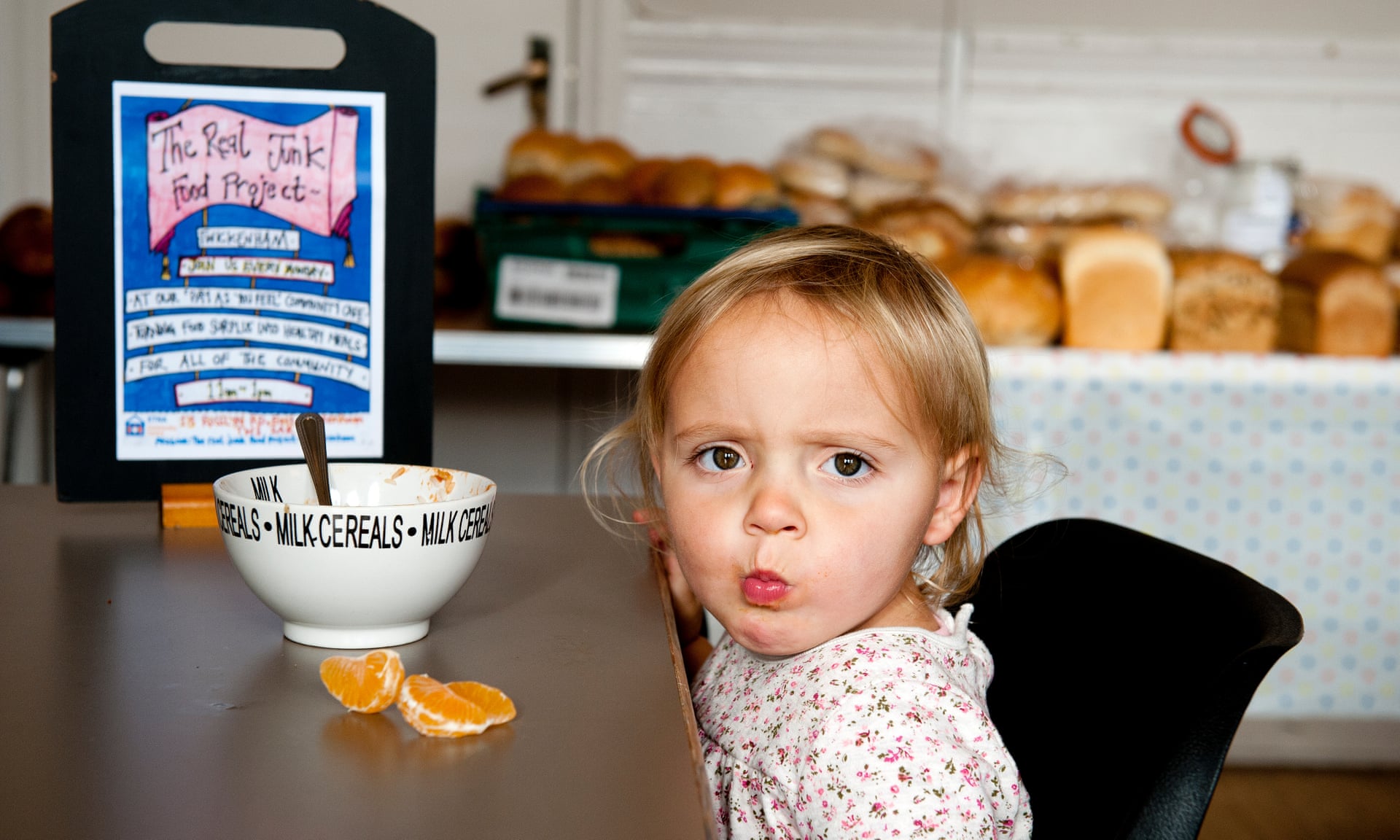 Mothers with toddlers at their ankles sit beside elderly men and women out for a welcome bit of company on a Monday lunchtime. Plates are piled with steaming pasta, couscous salad and warm bread rolls as the chefs wipe sweat from their foreheads in a galley kitchen next door.

This is a bustling local restaurant in an affluent area of south-west London, but there is one big difference from the many fashionable cafes that line the streets of this London “village”. The food has all been saved from the bin.

On Thursday Tesco announced it would be working with the charity FareShare to try to reduce food waste, but across the country a growing environmental movement has been taking matters into their own hands for months to collect and use waste food.

Collected earlier that morning from a number of supermarkets which have been persuaded to hand over their waste food rather than dump it into the dustbin, the ingredients for the latest The Real Junk Food Cafe in Twickenham are used to create wholesome lunchtime meals at a pop-up restaurant.

The Real Junk Food Project (TRJFP) , aims to save as much food from the bins as possible by encouraging supermarkets to hand it to the cafes instead. Where supermarkets might have been slow to act TRJFP has gone door to door to collect waste from stores to force the issue.

“This is not a cafe for the homeless, or a cafe for the elderly, it is not a food bank. The cafe starts from an environmental stance, to stop all this food going into landfill, and the social element of people coming together to eat and chat comes out of that,” said Chrissy Weller, who set up the cafe with her friend Clare Box. “We welcome anyone here to pay as much as they feel for the food, or nothing at all. So you get a big mix of people sitting around a table talking and eating together.”

The cafe in Twickenham is one of the latest to be set up under the TRJFP banner in an attempt to tackle the mountain of food waste in the UK, where 1.9 million tonnes of food are thrown away each year.

Set up in 2013 by the former chef Adam Smith, there are now 127 cafes preparing and serving waste food in seven countries and 10 “social supermarkets” that collect, store and distribute waste food on a much larger scale than the cafes are able to. Each new venture has to go through a due diligence check by TRJFP before being given a licence to operate.

The movement spreads through a combination of inspiration, shared experience and determined volunteers in each local area where they operate. Weller and Box drew inspiration from the well developed network in Brighton, a city that hosts TRJFP cafes four days a week and has opened a social supermarket known as The Hub in premises provided by the council.

The Brighton cafes have been recognised for the quality of food they put on the menu. They won two golds and a silver in the Brighton and Hove food and drink awards this year.

“We work in a professional manner, we are food people who make sure everything is the best it can be,” said Sarah Griffen, from Brighton TRJFP.

“Over four cafes we are feeding about 300 people a week, all our food was on its way to the bin. We are coming first and foremost from an environmental project and the social and community benefits come from that.”

Twickenham’s once-a-week offering has been running for six months. “When we started we got everything back to front. I set up a Facebook group and no one responded, nothing really happened and I was about to give up when the South West environment trust [sic] contacted me and offered to help,” said Box.

With the help of the environmental charity, Weller and Banks were given a venue – gold dust in an area of exorbitant rents – a room in a local community centre, the Etna, which includes a small kitchen.

“We had a quiet opening because we had no idea where the food would come from or how much would come, but someone from the project told us ‘set it up and the food will come’. We started on 4 June with hot toasties from Harris and Hoole cooked on an old George Forman griddle and a donated vat of coffee,” said Clare. “Since we started we have saved 1.39 tonnes of food. We weigh everything that comes through the door.”

For chefs Chrissy and Clare, who have a rota of volunteer cooks, it is a little like being in a MasterChef competition. They get a text on Sunday night alerting them to what food is available at the local supermarkets and bakeries involved, and early on Monday morning they drive to several venues to collect it. “We have no idea what food we will be given on the day. Both of us are good at putting things together out of nothing.”

The Twickenham cafe has inspired other similar projects. Mark Griffiths, who works with disadvantaged families and children ineight schools in the surrounding area, leapt on the idea to help the many local families struggling to feed their children. Each week at Victoria junior school in Feltham, Griffiths and his colleague Denise Haines from the School and Family Works group set up a stall in the playground which is covered with food rescued from local supermarkets and the local Cavan Bakery.

“The parents who are in my family groups talk about how desperate they are and how they are struggling,” said Griffiths. “One single mother of three children has just £30 a week to buy food for herself and her children. She is really thin. I saw Chrissy and Clare’s cafe and thought we could do something similar in schools.

“The ‘save the planet’ focus means there is no stigma. We hand out leaflets which say you would be doing the world a favour if you took this food. It goes within minutes.”

For Smith, the cafes are just the beginning. He recently opened the 10th TRJFP social supermarket in a warehouse in Wakefield, and cafes and social supermarkets are springing up in Germany, France, Japan and the US. “We can feed thousands of people from a warehouse,” he said. “We support food banks, and charities and schools and provide food boxes for 18,000 children a week from the Wakefield one, all of which has a much bigger impact.”

He is driven and focused, and angry about the scale of food waste in the world. “Our food system is out of control. It is too big and too complex, the supermarkets don’t care unless their bottom line is affected. They are some of the biggest waste producers in the country. It needs to be stripped back and started over again.”