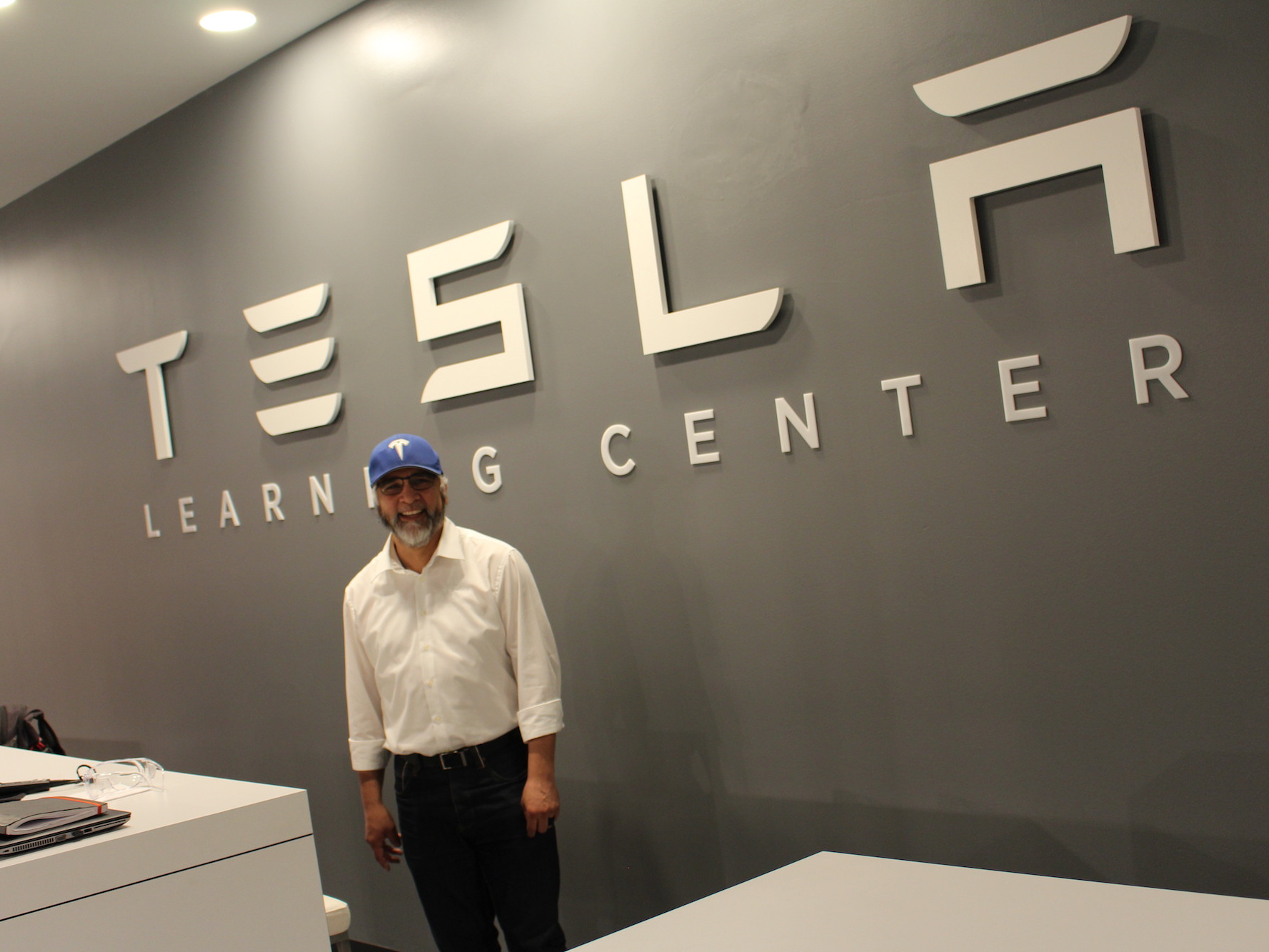 It’s a sunny afternoon at Tesla’s factory in Fremont, California — and the facility is under drone attack.

Small camera drones routinely appear in the skies above the world’s most interesting carmaker. Everyone — spies, the curious, people who just want to fly their drones over the most challenging target — wants a look.

The scene outside is a marked contrast to what’s going inside the Tesla Learning Center, a large room where a dozen new hires are methodically studying how to assemble a vehicle. Employees who previously might not have been able to tell a bumper from a fender or a motor from an instrument panel are learning Tesla’s manufacturing process. The vibe is cheerfully didactic.

The man in charge of all this is the production training manager, Andre Rivera, a Tesla veteran of seven years who got his start in the auto industry on the assembly line at this same factory when it was known as New United Motor Manufacturing Inc., or Nummi, jointly operated by General Motors and Toyota. (GM wanted to learn about Toyota’s “lean” manufacturing system, and Toyota wanted to better understand the US car business; Rivera spent 19 years working there before leaving to become a consultant in the industry.)

The guru at work

Wearing a blue Tesla cap, a white Tesla shirt, and jeans, Rivera, 47, tells a story about an early hire, a young man who was an impressive interview — until talk turned to his work background.

“He sank into his seat. His energy was gone,” Rivera recalled. “He said: ‘OK, now you’re going to ask me about my experience. But I don’t have any with automobiles. I’m a server at the Olive Garden.'”

Rivera knew where the kid was coming from; he was once in his 20s with no idea how to build a car in a modern factory — and he was later put in charge of an entire assembly line to launch new vehicles.

Then Rivera asked him what he had to handle every day. He got exactly the response he wanted: dealing with different attitudes, multitasking, working on a clock, communicating, problem-solving.

Rivera often uses that story to illustrate how Tesla is a place of boundless opportunity, free of conventional restraints and nurturing of elevated expectations.

The company has grown significantly since then, when Rivera was one of just four supervisors still assembling the original Tesla Roadster. But even though its entire workforce is now over 30,000, Tesla is still vastly smaller than Toyota or Ford.

“If you have two boxers of equal ability and one’s much smaller, the big guy’s going to crush the little guy, obviously,” Elon Musk, Tesla’s CEO, said last year during the company’s third-quarter earnings call. “So the little guy better have a heck of a lot more skill. That is why our standards are high … They’re high because if they’re not high, we will die.”

The man who trains everybody in the Tesla way

This is the crux of Rivera’s job, which, in the grand scheme of Tesla, is huge. He oversees the training of everybody who comes to the Fremont factory.

All hires have orientation for a day. Next comes a day of “manufacturing essentials,” where employees learn their way around the factory. Production workers then get two days of “manufacturing fundamentals,” and people destined to work on the Model 3 mass-market vehicle train for two additional days.

Rivera is a teacher, a mentor, and, as his story about the insecure new hire shows, a guru. The objective isn’t simply to staff the production lines — it’s to set employees on a path to grow with the company.

“Back in Nummi days, it was a cool culture, and they gave me a good foundation, but a lot of people hit the ceiling,” he said.

Like many professionals involved in auto manufacturing, Rivera gets off to an early start.

He could be at the factory by 6 a.m., then into meetings or consultations about additional training that could be needed out on the floor, especially on the new Model 3 line. (“Model 3 is a high priority for us now,” he says.)

Then the new hires start rolling in. They’ve just wrapped up basic orientation, and, according to Rivera, they’re pretty pumped up on the Tesla story, even if they did their homework beforehand.

“I haven’t seen one week when we don’t have people coming in, except maybe Thanksgiving week,” he said.

In total, Rivera could be coordinating training from Monday to the following Monday with his staff of about 50, while also managing requests for additional training for workers already on the job.

There’s an intense focus on safety, Rivera says, noting that Tesla doesn’t want anybody getting injured because, for example, they don’t know the proper way to use a tool.

Tesla came under scrutiny last year after several employees said they had injuries from long hours of repetitive movements. The company says it has since implemented new policies designed to improve working conditions, and its new safety chief, Laurie Shelby, recently announced Tesla’s intention to become the safest auto factory in the world.

Teaching people to change the world

With over 20 years of experience under his belt, Rivera has seen a lot in the auto industry. But he’s never seen anything like Tesla before.

“The way that we think about the car is totally different from how people have always thought about cars,” he said, citing some of Musk’s ideas about how to reinvent the automobile.

“It wasn’t anything that was crazy,” Rivera said. “It was just common sense. Why doesn’t everybody think like this?”

He points to Tesla’s lack of model years in favor of over-the-air software updates that can improve a vehicle overnight. Rivera, who worked with the traditional industry’s five-to-seven-year cycles for introducing new versions of cars, says Tesla is satisfying a deeply felt customer need. Why should they have to wait so long for something new?

That speed, Rivera says, generates the new ideas Tesla will need to be successful. He also scoffs at the notion of “Tesla killers” coming to market over the next few years.

“Our mission is to transition the world,” he said. “And we know we can’t do that ourselves.”

In the end, Rivera’s lifetime in the industry has enabled him to appreciate his luck.

“To be able to come in at the ground level to launch the Model S was right in my wheelhouse,” he said.

“I was in the right place at the right time,” he added. “I really wanted in, and I was passionate about all-electric cars.”