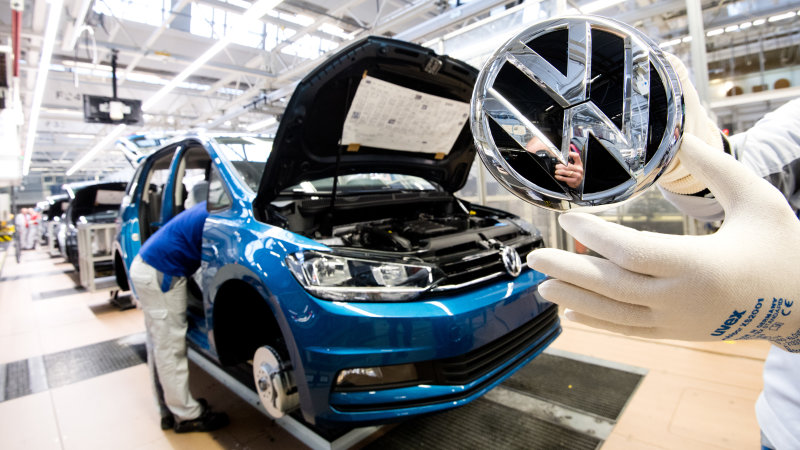 ‘Everyone knows German engineering is outstanding for sure’

FRANKFURT — To unclog bottlenecks last year in Tesla Model 3 production in California, Elon Musk flew in six planeloads of new robots and equipment from Germany to speed up battery output.

Now the Tesla CEO is trying to tap that German automation ecosystem directly with Tuesday’s announcement that the electric carmaker will build a European car and battery factory near Berlin.

So far, Musk has failed in his plans to create a factory so highly automated that it allows Tesla to make cars more efficiently than much bigger rivals. As a result, the automaker has struggled to meet production goals and been hit with defections of key staff members to rival firms.

The new German factory is designed to help change all that.

“Everyone knows German engineering is outstanding for sure. You know that is part of the reason why we are locating Gigafactory Europe in Germany,” Musk said at a prestigious German car awards ceremony in Berlin late on Tuesday.

BMW has a factory in Leipzig, where it builds its i3 electric vehicle and it will source battery cells from a factory in Erfurt run by China’s Contemporary Amperex Technology Ltd (CATL).

VW is retooling a plant in Zwickau to build 330,000 electric cars and German engineering giant Siemens AG, which has an industrial and technology hub in Berlin, last week said it met with Musk to discuss projects in the area of advanced manufacturing and car charging.

Tesla has yet to meet its goal of building more than 500,000 Model 3 cars by 2018. That goal was set back in 2016, and since then Tesla’s production guru, Peter Hochholdinger, a former Audi production expert, quit to joined rival Lucid.

By contrast, the Volkswagen brand delivered 6.24 million cars last year and is readying its global production network to build 22 million electric cars by 2028.

To ramp up manufacturing, Tesla started making its Model 3 in a tent, but the California-built cars often failed to meet German quality standards.

In August, German car rental company Nextmove walked away from a 5 million-euro (£4 million) order for 85 Tesla Model 3 electric vehicles, following a dispute over how to fix quality issues.

Although Tesla has chosen a high-cost location, there is higher potential for automation with electric cars since they are less complex to build than combustion engined vehicles.

A combustion engined car has 1,400 components in the motor, exhaust system and transmission. By contrast, an electric car’s battery and motor has only 200 components, according to analysts at ING.

While the average combustion engine takes 3.5 hours to make, and the average transmission requires 2.7 hours of assembly, an electric motor takes only about 1 hour to assemble, consultants at Alix Partners said in their Global Automotive Outlook study.

“Personnel is not a high cost factor in the production of electric cars,” Evercore ISI analyst Arndt Ellinghorst said.

Today the biggest cost factor is still battery packs, which amount to between 30% and 50% of the cost of an electric vehicle.

By adding the “Made in Germany” quality, Tesla could significantly boost sales of its electric cars, which are already class-leading.

On Tuesday Tesla’s Model 3 was awarded the “Golden Steering Wheel” by Germany’s Auto Bild magazine, with jury member Robin Horning saying the Model 3 had beaten the new BMW 3 series and the Audi A4 in “mid and premium class” category.

“I want to congratulate you. With all this competition in Germany it is a great achievement,” he said at the awards ceremony. “I thank you for pioneering, for pulling us and pushing us. Elon is the innovator.”