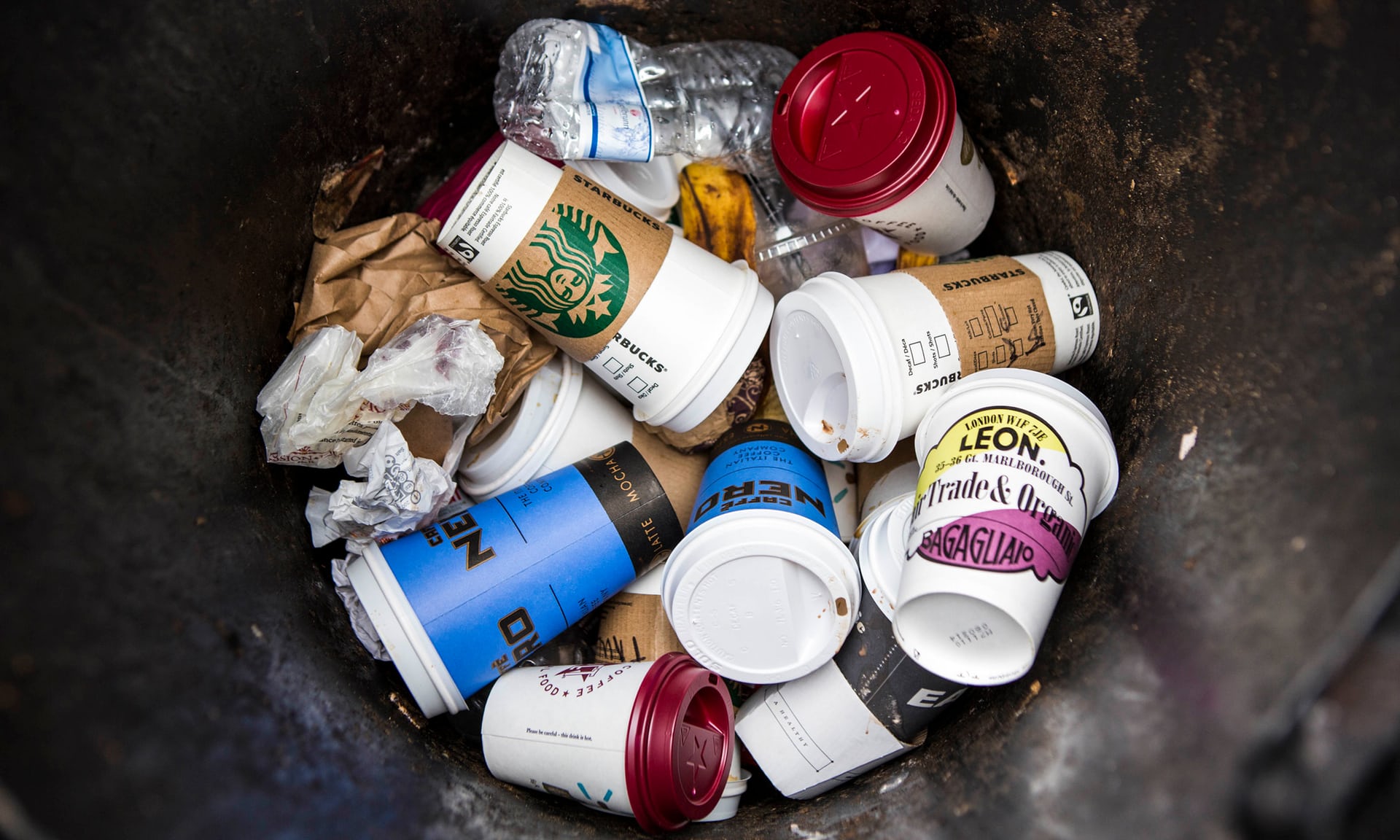 The Guardian view on recycling: throwaway economy is not cost-free

Use less, re-use, recycle. Three steps to saving the planet

Take-out coffee and bottled water symbolise both the luxury and the waste of the early 21st century. They represent the throwaway world, the always-on culture, the low-pay, low-skill jobs. They reflect our catastrophic disregard of the consequences of our choices for the world around us.

It is now a week since China implemented tight new controls on the kind of waste it will take for recycling. Although the UK is not the worst offender, it will have a big impact on recycling rates in the UK, where plastics are often not properly separated. Greenpeace estimates that as much as half of the plastics Britain sends to China will be unacceptable.

Then on Friday, MPs on the environmental audit committee – which last month called for a deposit scheme for plastic bottles – produced another shocking report about the impact of take-out coffee cups. They want a 25p levy applied to the 2.5bn cups used each year to pay for the recycling, which is possible but complex. And if that fails, then the MPs suggest throwaway cups should be banned altogether. Coffee cups look innocent. But in between the cardboard is a tightly bonded polyethylene liner, which is difficult to remove and means they are not accepted by paper mills. Like the fashion for carrying around fresh water, it seems the faster we talk about the need to be green, the quicker we invent materials that may outlast the human race. It would not be difficult to use less – for example by making drinking water freely available everywhere, and introducing a deposit scheme to encourage re-use. But the message on plastics applies to all kinds of packaging: use less, re-use more, recycle the rest. Britain is better at rubbish than it was: the amount of waste that goes into landfill has been cut from 80% to 20% since 2000 partly by a huge increase in recycling – but also partly by sending hundreds of millions of tonnes out of the UK each year, much of it to China. Now China is no longer prepared to be the developed world’s offshore dump.

Recycling plastics can be profitable, but it is also capital intensive and risky because if the price of raw materials involved in making new plastics falls, the recycled alternative becomes uncompetitive – so when the oil price collapsed in 2016, councils had to bear more of the cost of recycling. Deposits on plastic drinks bottles and a levy on takeaway cups are a start. They tackle the problem at the sharp end, and make us more aware of the costs of our habits. But it can’t all be down to consumers. There should be more effort to educate about recycling and the risk of contamination, more on-street bins for the most valuable, food-quality, plastics.

Uniformity across the UK would be a bonus, but at the moment every council has a different contract and different standards. Dropping a bottle on the street or in a picnic area, putting it in the rubbish rather than in the recycling, need to acquire the same kind of social stigma as smoking in front of children. But the fight should start before recycling, and before re-use. It should begin with the producer: use less plastic packaging. Make the polluter pay.