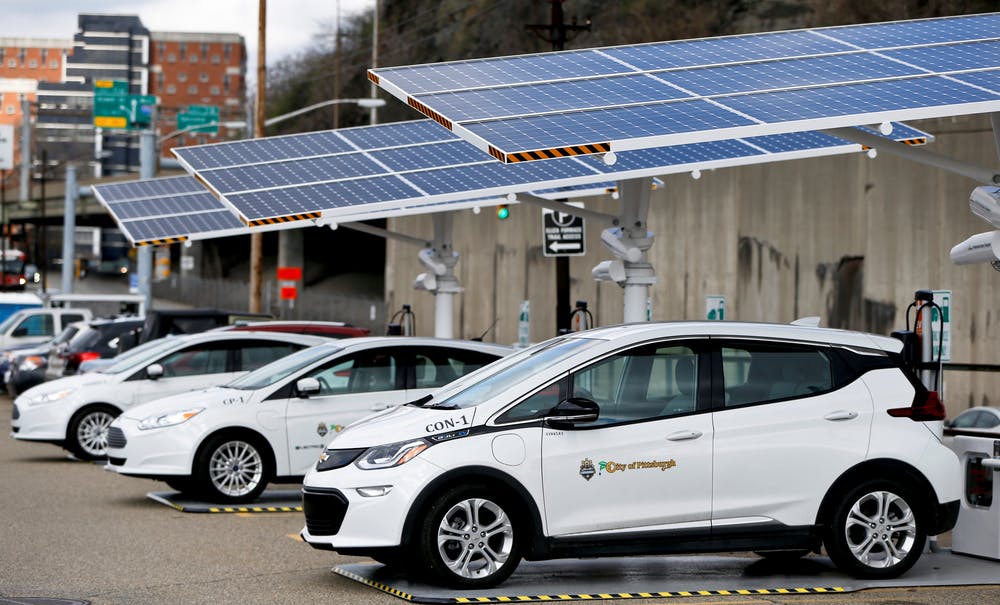 The Grim State of Electric Vehicle Adoption in the U.S.

Plugging in cars and trucks will be critical to averting climate catastrophe, according to the IPCC. How far has the U.S. come?

According to a new report from the United Nations’ scientific panel, the Intergovernmental Panel on Climate Change (IPCC), humanity has about 12 years to avoid the most dire consequences of climate change. To avert catastrophic sea level rise, food shortges, and widespread drought and wildfire, emissions must be reduced by 45 percent from 2010 levels, and by 100 percent by 2050.

To accomplish this daunting feat, the global transportation sector will need a major overhaul. In the U.S., the world’s second-largest producer of greenhouse gases, transportation makes up the largest share of emissions. In cities, passenger vehicles and public transit fleets will have to move from fuel-burning engines to electrification, a “powerful measure to decarbonize short-distance vehicles,” according to the IPCC report.

So far, progress has been wildly insufficient: In the U.S., close to 200,000 electric vehicles—both plug-in hybrid electric vehicles (PHEV) like the Chevy Volt and the Toyota Prius Prime and battery-electric vehicles (BEV) like the Nissan Leaf and Tesla Model S—were sold in 2017, out of 17,340,700 vehicles. That’s only 1.15 percent of all cars sold in 2017. But, to put that in perspective, that’s a 26 percent increase from 2016, and the trend is expected to continue, according to environmental advocates and EV industry experts.

If we want a survivable world, it’ll have to. Here’s a look at the range of initiatives, regulations, and incentives that states and cities around the country are taking to embrace this future-critical technology.

The leader of the pack

California remains the state leading the electrification charge. There, plug-in and battery electric vehicles made up 4.8 percent of total car sales in the first quarter of 2017. Earlier this year, California Governor Jerry Brown signed an executive order setting a goal of five million electric vehicles on the state’s roads by 2030. This $2.5 billion initiative will also help to bring 250,000 vehicle charging stations and 200 hydrogen fueling stations to the state by 2025. California also offers the most rebates and incentives of any state, including granting drivers of alternative-fuel cars HOV lane exemption and a Clean Vehicle Rebate Project that provides $1,500 to $2,500 to consumers who purchase light-duty zero emission vehicles and PHEVs.

Public infrastructure build-outs are in the works around the state. Los Angeles currently has a total of 1,800 EV charging stations, and hopes that this number will reach 25,000 by 2018,* according to Lauren Faber O’Connor, the city’s chief sustainability officer.

California’s work has been influential beyond its borders. Its Zero Emission Vehicle (ZEV) program has been successful in introducing EVs to the market by requiring automakers within the state to sell a certain percentage of electric cars and trucks. The same goes for the nine others that have adopted it: Connecticut, Maine, Maryland, Oregon, New Jersey, New York, Rhode Island, and Vermont. Those states represent about a third of the U.S. auto market, which should pressure automakers to expand their affordable EV offerings. “Collectively, they have a lot of purchasing power, and a lot of political power,” said Max Baumhefner, a senior attorney with the Natural Resources Defense Council.

Cities from Sacramento to Austin to Burlington are undertaking efforts large and small, from electrifying bus fleets to increasing public accessibility to EVs through car-sharing programs. Last year, Atlanta passed a landmark ordinance that requires all new residential homes and public parking facilities to accommodate EVs and 20 percent of the spaces in all new commercial and multi-family parking structures to be plug-in ready. Similarly, Vermont’s energy building code requires commercial and residential projects over a certain size to include a percentage of EV supply equipment or EV-ready parking spaces.

In 2016, Columbus, Ohio won the U.S. Department of Transportation’s Smart City Challenge. Fueled partly by $50 million in grant winnings, the city’s Smart Columbus public-private partnership aims to reinvent local mobility systems. According to Brendan Kelley of Drive Electric Ohio, an initiative of the statewide nonprofit Clean Fuels Ohio dedicated to improving air quality, Smart Columbus has a goal of increasing EV market penetration in the city by 500 percent by early 2020. To help the city meet this goal, Drive Electric Ohio offers a program where residents and local businesses can meet up to learn about and test drive EVs. “We’ve found that the most effective tactic for overcoming people’s misconceptions about EVs and opening them up to the possibility of buying one is to get them behind the wheel of an EV,” said Kelley.

In Texas, Austin is rapidly working on a plan to transition 330 municipally-owned vehicles into electric over the next three years. Orlando, Florida, is leveraging its status as one of the most-visited destinations in the U.S. through a program called Drive Electric Orlando in partnership with the Electrification Coalition, a nonprofit group of business leaders that aims to accelerate EV adoption for the benefit of national and economic security. “We saw an opportunity to get people into EVs as they rent cars,” said Christopher Castro, the city’s director of sustainability. “We’re working with hospitality partners, all of the theme parks, most of the hotels, all of which have charging stations.” Castro also said that Orlando has committed towards 100 percent of their fleet powered by alternative fuels by 2030. More broadly, the Florida Department of Transportation and Drive Electric Florida are working on a rollout of charging stations down the I-95 corridor on the east coast and on the I-4 from Tampa to Daytona.

Looking north, New York state offers a $2,000 rebate for the purchase or lease of a new PHEV. Earlier this year, Governor Andrew Cuomo announced a $250 million EV expansion initiative called EVolve NY in partnership with the New York Power Authority. This program will strive for public-private partnerships through the next seven years to come up with new business and ownership models, increase awareness about EVs and charging, and expand fast-charging infrastructure.

New York City’s goal is to reach 20 percent of cars sold for use in the city to be electric by 2025, up from less than 1 percent today. NYC also aims to convert its public bus system to an all-electric fleet by 2040. In Boston, 5 percent of parking citywide must be equipped with EV chargers, and 10 percent be EV-ready in new construction projects and all projects in South Boston and downtown parking freeze zones, according to the City of Boston’s EV policy. Additionally, the state of Massachusetts’ Department of Energy Resources offers EV rebates of up to $2,500.

Local governments are also working together to build influence, not unlike how states signed on to California’s ZEV program. Last month, Los Angeles Mayor Eric Garcetti launched the Climate Mayors’ Purchasing Collaborative, a online platform and resource portal that guides and encourages city leaders to obtain EVs for municipal fleets.

Collective vehicle purchases are designed to send a signal to the car market, Garcetti said. “If you build electric vehicles, we will buy them,” he told CityLab via email. “We will leverage our combined purchasing power to show that the demand for EVs is real and growing; that we want to ensure equal access at competitive prices to these vehicles; that we will build the charging infrastructure needed to make EVs the new normal.”

When the Collaborative launched last month, twenty mayors from around the U.S. committed that day to a more electric future. Austin, Aspen, Phoenix, Jersey City, and Fayetteville were among them, signing on to purchase light-duty EVs for their municipal fleets, which will be used by city employees across a range of departments, totaling 391 vehicles across all of the cities.

Even in states that have been less welcoming to EVs, such as Wyoming, Idaho, and Kentucky, electric vehicles and charging infrastructure may soon become a part of daily life due to the 2016 Volkswagen settlement. To settle allegations of cheating emissions after the EPA and Federal Trade Commission filed claims, the automaker agreed to pay $14.7 billion. One of the U.S. Department of Justice requirements involves VW investing $2 billion ($800 million for California, $1.2 billion for the rest of the U.S.) to increase public awareness about EVs and support public charging infrastructure. States can use up to 15 percent of their allocation for infrastructure and the rest to develop programs to bolster EV access, such as Sacramento’s two new electric car-sharing models, Gig and Envoy.

Advocates say that increasing the amount of public Level 2 stations (which offer about 70 miles of range per hour of charge) and DC fast-charging stations (40 miles of range for every 10 minutes of charging) is vital to increased consumer adoption. Consumer research over the past four yearsshows the decision to buy an EV is directly related to the availability of this kind of infrastructure. According to a 2015-2016 study from the International Council on Clean Transportation, markets in several U.S. cities showed charging station growth of 30-80 percent which correlated with a doubling of their EV uptake.

“People feel more comfortable to buy or lease a car knowing they can charge it,” said Mary Lunetta, a representative for the Sierra Club’s Clean Transport for All campaign.

But even in states and cities that have emphasized EV sales, however, major barriers exist.

For one thing, Americans really love to buy giant cars—crossover and SUV sales have more than doubled since 2010, and the “Big Three” American automakers keep doubling down on high-margin pickup truck offerings. So far, they have shown little interest in electrifying such large, heavy-duty vehicles. “In Texas you need a truck,” said Karl Popham, manager of EVs and emerging technologies at Utility Austin Energy. “If you don’t have an electric truck, we’re gonna continue to not see the pace needed for real growth.” And plug-in vehicles aren’t as climate-friendly in areas where the energy grid runs off coal. (Only 2 percent of the fuel mix in Florida’s energy grid, for example, is renewable.)

For EV adoption levels to reduce carbon emissions in a meaningful way, the EV market will need a massive push from every corner, from government initiatives to more affordable cars on the market to more public charging stations. Through the lens of the IPCC report, electrifying a small number of city fleets is small potatoes. Individual car owners need to make the switch, too, and fast, said Michelle Krebs, an executive analyst for Autotrader. Government “carrots” can help spur consumer adoption, she said, pointing to Norway, where EVs have a 22 percent market share due to strong incentives like no charges on toll roads or ferries, free municipal parking, and vehicle tax exemptions.

In the U.S., however, buyers are unlikely to see additional federal subsidies anytime soon. Currently, the IRS offers a tax credit of up to $7,500 for new EVs purchased for use in the U.S., but that will start to peter out once 200,000 qualified EVs have been sold by each manufacturer. Last quarter, Tesla hit the 200,000 mark, and the Nissan Leaf and the Chevy Bolt are nearing it.

And EV car prices could soon be on the rise. On October 7, Senator John Barrasso, a Republican from Wyoming, introduced a bill to remove the tax credit early and instead tax EV owners more. Moves like this, in tandem with President Trump’s attempts to freeze fuel-efficiency requirements and devolve regulation of coal-fired power plants, are a hard push against meaningful efforts to combat climate change.

The new United States-Mexico-Canada-Agreement, reached between President Trump, Canadian Prime Minister Justin Trudeau, and Mexican President Enrique Peña Nieto last month, won’t help either. The update to the North Atlantic Trade Agreement calls for 75 percent of the content of a car or truck to be made from parts made in North America. Right now, the average conventional vehicle manufactured in the U.S. uses about 50 to 60 percent U.S.-Canadian content, but many electric vehicles are down in the 20 to 30 percent content range. Tariffs on that imported content will cause the average vehicle price to go up further, which may put downward pressure on adoption. Combined with the additional steel and aluminum tariffs, the new USMCA may mean widespread EV adoption is a pipe dream for the immediate future.