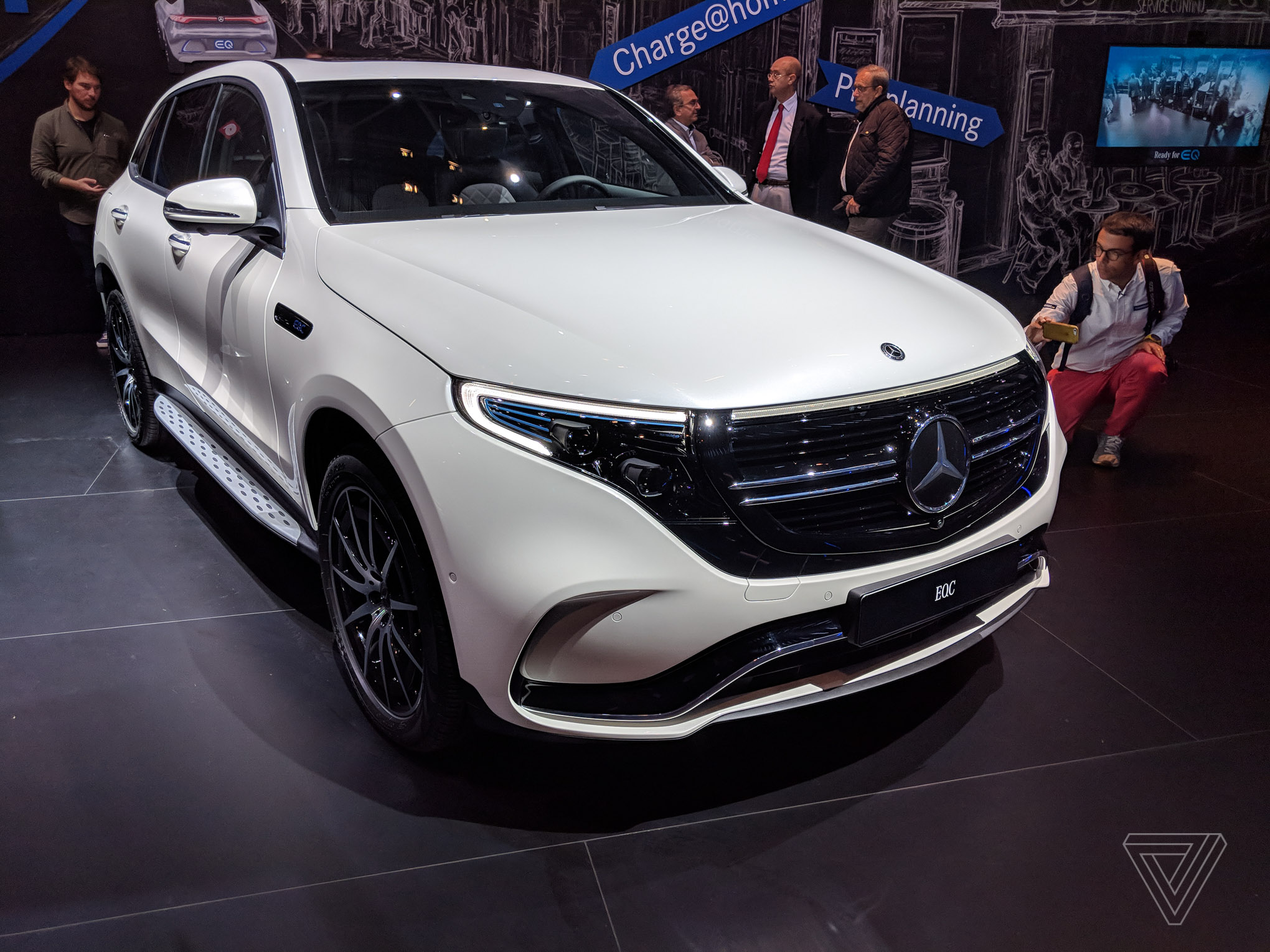 The future of electric car design has yet to be written

At its heart, the car industry remains a deeply conservative one

Carmakers are a weird bunch. On one hand, they’re willing to give their designers free rein and millions of dollars to explore distant-future concepts, but then their production vehicles toe a narrow, unadventurous design line. Attending the Paris Motor Show this week, I see this dichotomy everywhere around me. Renault’s EZ-Ultimo self-driving limo is parked a few feet away from a fleet of anonymous-looking SUVs. Audi’s attention-grabbing PB18 E-tron supercar is flanked by uniformly forgettable autos. And Peugeot’s gorgeous e-Legend Concept is a drop of design flair and aggression amid a sea of visual predictability. I came to Paris looking for the future of electric car design, but all I’ve been able to find are a few lovely fantasies and a lot of staid continuity.

What’s missing from the world of car design today is any sort of middle ground. You’re either limited to futzing around with headlights and other inconsequential cosmetics or you get a totally blank slate with no design constraints at all. Anyone can sketch out a romantic, enticing, opulent, fantastic — and unrealistic — concept for many years into the future. But where are the risky, opinionated, near-future designs that embrace the full range of possibilities that electric cars open up?

My view from the Paris show floor is that carmakers are, at their core, extremely conservative. They engage in the bombast of cutting-edge innovation, and they build physical representations of it, but that’s all an extravagant form of marketing. In their pursuit of hype and attention, car companies will often debut their new cars in a striking, provocative red, only to go on to build the majority of those cars in gray, white, and black because those are overwhelmingly the most popular colors that people end up buying. We share in a collective delusion about just how novel, wild, or unprecedented we want our vehicles to be, and car companies have decided to nurse it along so long as it stimulates their sales.

Mercedes-Benz is a good example of the prevailing carmaker philosophy at the moment. The storied German marque is working on releasing the first car of its all-electric EQ sub-brand, the EQC SUV, and I spoke to Jochen Hermann, head of “electromobility” at Mercedes’ parent company Daimler. Hermann says that Mercedes “didn’t want to take two steps at once,” meaning that the switch to electric drive and the need to think about how you would charge and use an electric vehicle is a big enough disruption already. “We kept the shape familiar,” says Hermann of the EQC, “but changed everything [else] such that it’s an EQ car.” In other words, the core experience remains as it was, and designers are once again constrained to making only skin-deep adjustments.

In order to save on manufacturing costs and complexity, Mercedes opted to put the EQC’s electric drive components into the space vacated by the combustion engine that the car doesn’t need. That allows the company to use its existing production lines to build the EQC faster. No need to rethink the entire vehicle architecture if you can just swap one drive system for another. Few people get fired for an overabundance of caution, after all.

But the irony of this pragmatic faster-to-market strategy is that it’s liable to slow down the overall pace of innovation. With electric cars, there’s an enormous space for creativity when it comes to figuring how many motors to use, how powerful they need to be, and where to position them. The engineering layout of an EV is vastly more flexible than that of a combustion-engine car. And yet, Mercedes is opting to stick to what’s already working.

There’s a certain degree of real-world skeuomorphism going on with electric car designs. Batteries need cooling, yes, but an EV doesn’t strictly require a front grille (as evidenced by the Tesla Model 3). I asked Hermann about this, and he reiterated the point that car companies — or his company, at least — have to give consumers something familiar. Electric drive is the future, there’s a total consensus about that at the Paris Motor Show, but getting there will need to be done in incremental steps that don’t alienate the end customer. That’s also probably why the power sockets on most EVs are in about the same places and covered by the same flaps as fuel caps of yore.

Audi’s E-tron SUV follows almost the exact same formula as Mercedes-Benz’s EQC. It’s roughly the same size, has a big prominent grille and enlarged air intakes at the front, and its taillights are a big band of red that spans the width of the car. They’re both similar to each and every SUV already on the market. Both Audi and Mercedes are opting to start electrifying their portfolios with SUVs because that’s by far the most popular type of car that people buy. Both are playing it safe.

You can add any number of other upcoming electric contenders to this list, such as Jaguar’s I-Pace or Hyundai’s Kona, and you’ll find that they resemble each other and each company’s preceding models very closely. There’s something to be said about design continuity, to be sure, but at this point, it just feels like design conservatism. Car companies will be quick to tell you that, at the scale at which they operate and with the massive cost of time and money required to road-test even seemingly small changes, this is the most sensible approach. They may be right.

And yet, I think the primary reason Tesla exists and continues to enjoy a passionate following is because of this evident gap in creativity from the established carmakers. Elon Musk’s absurd genius act is the closest thing we have to a car manufacturer that’s willing to be bold in rethinking the entire vehicle. Yes, a Tesla is still shaped like a car, but it’s got a distinct look on the outside, an aggressively spartan infotainment system on the inside, and a constantly evolving user experience, thanks to a regular software update program. And the thing is, all of this is possible for the older brands to do as well — if they had the courage.

One novel approach to being more aggressive on the electric front while insulating the main car brand from potential pitfalls is Volvo’s. On the more attainable side of things, the Chinese-owned Swedish carmaker created the Lynk & Co brand and got it started with the obvious choice of an SUV. And for the more upmarket customer, Volvo is preparing another spinoff brand, Polestar, and its Polestar 1 will look to establish itself as a high-performance electric vehicle worthy of our attention. Both of those endeavors are safer than Volvo wading into the aspirational market for young Chinese consumers (Lynk & Co) or the super premium segment of luxury performance cars (Polestar).

Another disturbance to the established model of doing car business is likely to come from China, where companies are investing heavily in recruiting experienced designers and pushing electric technology and design forward aggressively. The automakers I spoke with in Paris all treat the Chinese market as critical to electric vehicle sales, which the local government subsidizes and encourages. But competition there will be fierce, with locals aiming to emulate the smartphone market by capitalizing on their proximity to manufacturing expertise, state support, and a greater willingness to pursue risky ideas.

Established car companies have all sorts of peripheral considerations, such as the market positioning of their brand and their dealer relationships, that play into the strategic decisions they make about their products. At shows like Paris, it’s also safer to stick to showing off the predictable, the existing, and the far-fetched instead of the actual design road map of the next three or four years. So my search for the future of electric car design is left frustrated for now. 2019 will have the biggest wave of new entrants into the all-electric market, and we’ll probably have to wait to glean the lessons provided by those cars before we can expect to see real, electric-first design innovation in the automotive space.