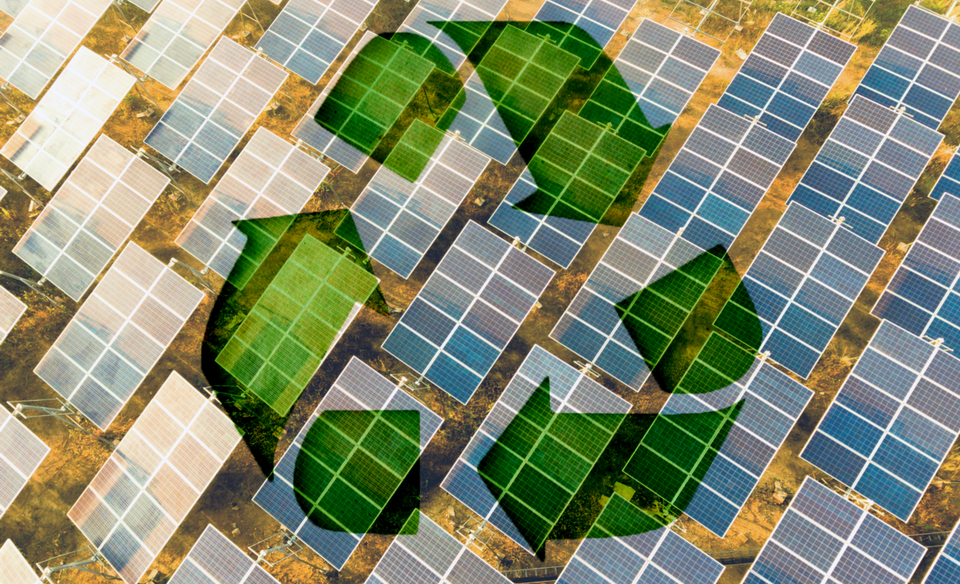 When today’s solar panels are tomorrow’s electronic waste, who will finance their recycling? Within a few years, the United States will be facing the sunset of a large number of solar installations. In response, Washington, California and New York are making plans to incentivize solar-panel recycling.

According to a publication by International Renewable Energy Agency (IRENA), more than 90 percent of the materials in typical photovoltaic solar panels — silicon, aluminum and glass — can be recycled and used again in the production of new solar panels.

Currently, the disposal of solar panels is not subject to specific regulation in the United States. This means panels simply may end up in landfills.

Industry developers, rather than regulatory agencies, are developing creative ways to anticipate the replacement of the solar infrastructure being installed today.

The nation is continuing to develop and expand its solar-energy infrastructure at an ever-increasing pace. From individual panels on residential rooftops to massive desert solar farms, solar panels are quickly becoming part of the national energy infrastructure.

Solar infrastructure typically has a projected lifespan of 30 years. Many manufacturers offer 20 or 25-year warranties. But as panels age, their efficiency decreases.

Given the growth of solar installations since the early 2000s, the report anticipates “significant waste” by 2030. It also said that “recycling or repurposing solar photovoltaic panels at the end of their roughly 30-year lifetime can unlock an estimated stock of 78 million tons of raw materials and other valuable components globally by 2050. If fully injected back into the economy, the value of the recovered material could exceed 15 billion USD by 2050.”

Given the growth of solar installations since the early 2000s, the report anticipates ‘significant waste’ by 2030.

Solar panels can be difficult to recycle. Extensive deconstruction is needed to isolate the raw materials and prep those materials for a useful second life. There is often a need to separate materials that have been sealed or infused together with powerful adhesives. This often requires additional labor.

The design of solar panels is changing quickly. This makes it hard to design and develop recycling facilities that accommodate past, current and future panels efficiently.

In the European Union, for example, solar panels are defined as e-waste and subject to recycling requirements set forth in the Waste Electrical and Electronic Equipment (WEEE) Directive.

In the United States, disposal of solar panels is governed by the waste disposal regulations as part of the Federal Resource Conservation and Recovery Act (RCRA). Additional state policies on waste disposal and recycling also exist.

Identifying the economic value of waste streams is not new. However, it requires creative and thoughtful planning.

This is especially true when sending damaged or defunct panels to the local landfill may be cheaper or easier than arranging for a dedicated end-of-life pickup.

Europeans have seen that regulations have made a significant impact. This is because the small cash value of the raw materials combined with the expense of transporting and recycling solar panels makes recycling based on solely economic incentives a hard sell.

Solar Energy Industries Association (SEIA) has taken an active role in helping to address this challenge. According to SEIA, “[Our] members are currently engaged in developing collection and recycling processes for the solar industry and are committed to guiding both state and federal regulations that support safe and effective collection and recycling models.”

SunPower has launched a Cradle-to-Cradle certification program that looks holistically at the design, manufacturing and recycling of panels to help minimize waste.

The industry is starting to take notice. For example, SunPower, a solar panel manufacturer, has launched a Cradle-to-Cradle certification program. This program looks holistically at the design, manufacturing and recycling of the panels to help minimize waste and provide incentives for proper disposal.

At the state level, Washington, New York, and California are taking initiative to help incentivize and regulate photovoltaic-panel recycling. Washington passed the first state-level mandate in 2017.

The ultimate question about financing any type of recycling and disposal issue is: Who bears the cost?

First Solar, one of the country’s leading solar panel manufacturers, has developed a comprehensive panel recycling program and thoughtfully has considered the financial impacts in this process.

By considering the cost of financing the recycling of panels as part of the overall challenge in financing solar development, First Solar is able to mitigate the cost impact to customers at multiple stages in the solar hierarchy.

It’s easy to make a chicken-and-egg analogy about supply and demand for solar panel recycling at the current stage of the game in the United States.

With the bulk of panels still well within their usable lifespans, the problem is not critical yet.

But as the United States moves through the first major life cycle of solar panels, focusing on cost reduction as a route toward incentivizing solar panel recycling would produce win-win solutions for manufacturers and customers alike. This is true even if the regulations remain limited.