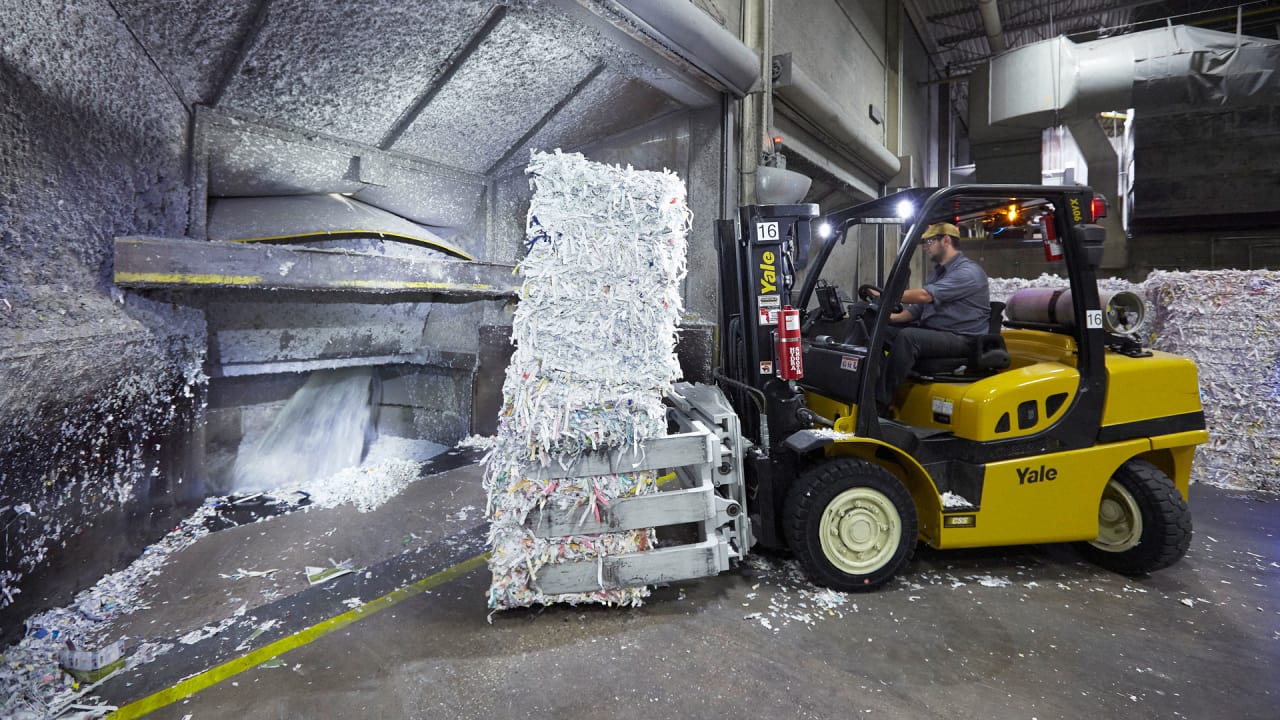 Earlier this year, Starbucks sent 18 truckloads of old paper cups to a paper mill in Wisconsin to prove a point: Contrary to a widespread myth, paper coffee cups can be recycled cost-effectively. The cups–25 million in total, from excess inventory that the coffee chain otherwise would have sent to landfill–were processed at the mill. Then the recycled fiber was sent to another partner to be incorporated into paperboard for new Starbucks cups.

The pilot project was a way to “demonstrate that a coffee cup can be turned back into a coffee cup,” says Jay Hunsberger, VP of sales for North America from Sustana, the mill that recycled the old cups. At the mill, the cups were mixed with water and ground into a pulp with a seven-foot-tall corkscrew to begin to separate the plastic lining that helps keep coffee cups from getting soggy. The fibers were screened and washed to finish the separation, then made into sheets and sent to WestRock, a packaging company, to be made into paperboard. At a third company, Seda, the board was printed with the Starbucks logo and shaped into new cups.

“There’s a misconception right now in the industry regarding the recyclability of poly-coated paperboard,” says Mike Mueller, senior manager of product marketing at WestRock. “I think that’s a big reason why that type of packaging isn’t accepted for recycling today broadly.” WestRock recently began accepting cups, along with paper food packaging, at eight of its own mills.

It’s commonly thought that it’s difficult or expensive to separate the plastic lining from the cups, or that contamination from coffee is an issue. But it’s no more expensive to recycle cups than other paper, Hunsberger says. And whether they are used or not also doesn’t matter. Before the pilot with Starbucks, Sustana already regularly recycled other coated food containers like milk cartons. Coffee cups actually yield higher-quality fiber than some other paper products.

One challenge is the supply–if it’s hard for a mill to predict how many cups it will get, it makes it hard to run efficiently. But if a mill knows that it will get a continuous stream of a certain percentage of cups, it’s not difficult to handle. “The material does behave a little differently, you do modify your process to be able to handle it, but if it is a consistent add into your process, then you can adapt for it and run it,” says Hunsberger.

Local recyclers also have to be willing to take the cups–something that’s uncommon now. In San Francisco, the local recycling company, Recology, began accepting cups in 2017. The company, which uses sophisticated equipment to sort its recycling, says that its reputation for “clean” bales of materials means that paper brokers are willing to accept paper coffee cups in the mix. Seattle, New York City, and D.C. are among a handful of other cities that also recycle cups. The latest city to begin recycling paper coffee cups is Denver, which recently sent its first shipment of two truckloads, or around 88,000 cups, to Sustana.

WestRock says that other municipal recycling centers should also begin to accept cups. “Part of why we’re trying to generate awareness about these activities is so other companies that own recycling centers and paper mills will begin to come on board with this, and we’ll begin to get it to scale over time,” says Mueller.

Starbucks wants to see recycling take a more uniform approach in the U.S., rather than the patchwork of policies that different cities have now. “Significant inconsistencies in product recyclability exist from city to city based on service models, market access and investments made in infrastructure and technology,” says Rebecca Zimmer, global director of environment at Starbucks. “Starbucks advocates for a national approach to provide a more consistent experience for consumers.”

The company, along with other partners, also has a long-running effortto redesign a single-use coffee cup that would be both easily recyclable and compostable. An even better option would be for more consumers to use their own reusable mugs, which rarely happens now despite a discount that Starbucks offers; reusable cups are also still uncommon for customers who sit inside the cafes while they drink. (Charging an extra fee for a paper cup, which the company tested in London, may be more effective, just as shopping bag fees have convinced more consumers to use reusable bags and reduced litter.) For now, armed with proof that cups can be recycled cost-effectively, the company hopes that more recyclers will begin working with current cups. “We hope this project will convince more mills across the country to be open to accepting paper cups in their recycle streams, a required step to scaling the operation to more municipal recycling service programs,” Zimmer says. Arguably, as a company that helped popularize to-go culture at cafes–and that uses around 6 billion cups annually itself–Starbucks should be investing more to help cities make that change.

Starbucks uses 10% recycled paper content in its new cups, and aims to double that by 2022. If the retailer decided to source that recycled fiber from its own cups, in the closed loop that it tested in the recent pilot, that might drive more demand for paper mills and local recyclers to accept the cups. Current paper machine equipment can’t make a 100% recycled paper coffee cup yet, but equipment can incorporate more recycled fiber–as much as 40-50%–so Starbucks and other cafes could also aim for more ambitious goals.

Recycled fiber, whether it comes from cups or another source, is slightly more expensive than virgin fiber from trees, but it adds up to less than a fraction of a cent, something that adds up for orders of a company on a scale like Starbuck. But the extra cost is also justified. “Cost and value are very different things,” says Hunsberger. If a company’s consumers are thinking about their impact on the environment, he says, then a company should take the step of responsible sourcing.