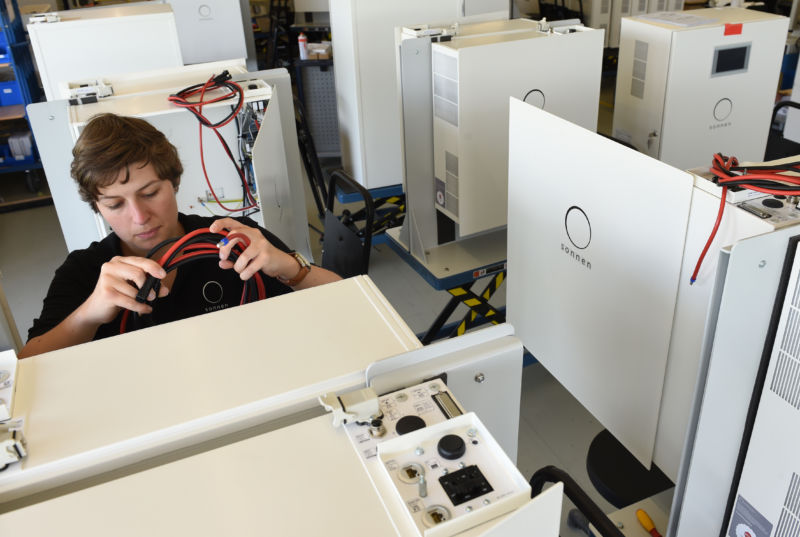 Sonnen has been one of the top competitors with Tesla’s Powerwall in the US home battery market. The company built its base in Germany, attaching batteries for self-consumption to homes with solar panels. Sonnen now claims 40,000 batteries installed in households in Germany, the US, and Australia.

The company’s assets include proprietary software that optimizes a home’s battery use in combination with solar power.

In May of last year, Sonnen deployed a “virtual battery” system in Germany, aggregating residential batteries into one-megawatt blocks. As Sonnen wrote in a press release at the time: “If deviations arise in the grid frequency of 50 Hz, the energy storage systems are able to automatically, and in a matter of seconds, either supply energy to the power grid or take energy from it—depending on what is currently required. Until now, it has mainly been CO2-intensive power stations that have been used for this primary balancing power; Sonnen’s networked residential energy storage systems are helping accelerate the removal of these power stations from the grid in Germany.”

Shell is best known as a retailer of the kinds of CO2-intensive fuel that Sonnen aimed to eliminate with its virtual battery, but Shell has been investing in low-carbon technology in recent years in an aim to diversify ahead of a carbon-regulated future. In its acquisition announcement today, Shell said it would focus on “electric vehicle charging solutions and the provision of grid services that are based on Sonnen’s virtual battery pool.”

The subsidiary making these acquisitions and investments for Shell is called Shell New Energies, and it was founded in 2016 to advance the company’s interests in electricity, as well as biofuel and hydrogen.