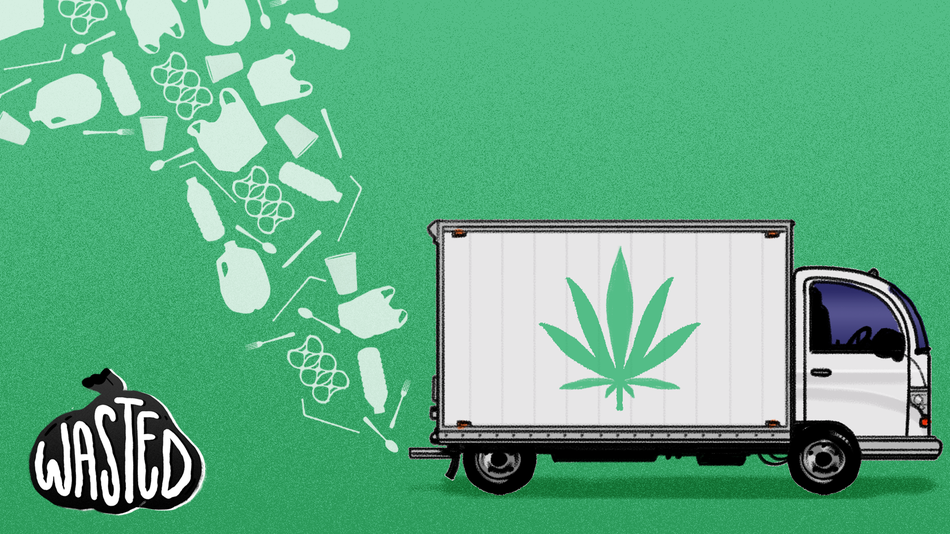 A package with no note, no return address, and nothing in it but a plastic container that once housed a vape cartridge arrived at a cannabis company in Northern California the other day.

The word had gotten out.

CannaCraft, which owns brands like Care by Design, is collecting plastic waste from weed packaging to convert into fuel to power its delivery trucks. It isn’t the only business intrigued by recycling plastic in this way — far from it. A number of high-profile companies like Delta, UK grocery store chain Tesco, and global behemoth Dow Chemical are also investing in innovative plastic recycling efforts.

The commercial focus on what’s called chemical recycling — breaking hard-to-recycle plastic down to the molecular level — comes as plastic waste is at an all-time high. While it may seem like an environmental win at first, critics say it’s not so simple.

“It’s sort of like the-lesser-of-two-evils environmentalism,” said Nate Maynard, who used to work at a plastics-to-fuel company and currently researches environmental issues at Chung-Hua Institution for Economic Research, a nonpartisan think tank in Taiwan.

Since we began making vast amounts of plastic 60 years ago, we’ve accumulated 6.3 billion tons of plastic waste. Only 9 percent of that has been recycled. Some of the stuff that doesn’t end up in landfills is sorted, washed, ground up, and eventually turned into other materials like t-shirts and carpet in a process called mechanical recycling.

Chemical recycling goes further, melting the plastic down to the molecular level so it can be remade into fuels and the types of plastic that can be used in water bottles and food containers.

The tech behind chemical recycling isn’t new, but there have been a slew of announcements recently about new business ventures. Earlier this year, investment firm Closed Loop Partners estimated potential revenue opportunities in the space at $120 billion in the U.S. and Canada and identified 60 companies and universities at various stages of development. The American Chemistry Council, the trade group that represents plastic producers (and, let’s not forget, opposed single-use plastic bag bans), sees this as a bright spot.

There are roadblocks ahead, though. So long as oil sucked out of the Earth is cheap, there’s little incentive to turn towards alternative sources, said Maynard, who also hosts the science podcast Waste Not Why Not. The plastic-to-fuel firm he worked at in Taiwan struggled with this, especially as it competed against state-owned oil interests. There are other issues, too.

“Environmentalists don’t want to see more fuel and more combustion engines, nor do they really want to create what is essentially an enabling way to deal with certain types of plastic waste that are harder to recycle,” he said.

“Seeing the waste that we were producing every day just made us sick to our stomachs.”

What’s more, plastic clogging landfills and oceans is only one part of the problem. Making plastic in the first place — spewing carbon emissions and heating the planet along the way — is another.

But what if you’re forced to use more plastic? California law requires cannabis producers to use child-proof packaging, most of which tends to be plastic.

“Seeing the waste that we were producing every day just made us sick to our stomachs,” Dennis Hunter, CannaCraft’s CEO, said. Before the child-proof packaging laws, the company heavily used paper packaging. When it had to switch over, it went looking for a way to balance its plastic karma. Since debuting CannaCraft’s plan to collect plastic waste to turn into fuel, Hunter’s heard from several dispensaries who want to do the same.

The mounting problem of plastic pollution is what drives many who work in chemical recycling, including Brian Bauer, cofounder of Resynergi, the California company CannaCraft uses to recycle its plastic.

“We have multiple goals and one is to eliminate or largely eliminate plastics from places they shouldn’t be, like in the ocean,” Bauer said, adding that the company aims to put its tech directly at the source of waste, be that on ships or at manufacturing plants. Resynergi uses 40-by-9-foot machines to process 5 tons of plastic a day. Each ton of plastic fed into the $2 million machines makes about 200 gallons of fuel.

During the melting process, some of the plastic turns into energy, which is then used to power the system. This is common among chemical recyclers, who note it takes less energy to melt the plastic than to frack for natural gas. (Yet, it’s still cheaper to make new plastic than recycle it.)

When deciding whether to cheer for plastic-to-fuel recycling, it comes down to the end goal: Do you want to reduce plastic pollution, or greenhouse gases? In terms of near-term climate change, likely the latter may help the most. Those concerned about plastics leaching chemicals into the ground at landfills and ending up in our bodies by way of the marine life that ate it first may lean towards the former. Same goes for those worried about what to do with the world’s plastic waste now that China refuses to accept it.

“It comes down to which bucket you are actually focusing on,” said Emily Grubert, assistant professor of civil and environmental engineering at Georgia Institute of Technology.

For Linda Wang, who invented a new way of plastic-to-fuel recycling with other scientists at Purdue University, the mountains of plastic are the most pressing issue. She doesn’t see the global appetite for oil reducing quickly — even with electric car adoption on the rise. Electric cars have their own issues, she said, including the environmental impacts of mining lithium for batteries and the global depletion of metals needed to build them.

Meanwhile, our plastic problem is a disaster with unimaginable consequences, the chemical engineering professor said.

“If [people] know that instead of throwing [plastics] into the trash and into the landfill, contaminating the environment, we can turn them into something useful, I thought that that could be a motivating factor,” she said of encouraging people to recycle more.

All the pros and cons of this innovative type of plastic recycling can be dizzying. And at the end of the day, it won’t solve all our plastic waste problems.

Using fewer single-use plastics, adopting a carbon tax, and making plastic producers pay into a recycling fund would help, Maynard said, adding that designers should also make products easier to recycle. Apple’s AirPods, for example, are impossible to repair and recycle due to their design.

“I think we need those things almost simultaneously,” Maynard said.

Until that happens though, CannaCraft plans to still turn plastics into fuel, with Hunter expecting to see even more plastic waste show up at his doorstep to be recycled.

“It’ll be like the Goodwill that closed a little too early for everyone to drop off,” he quipped.