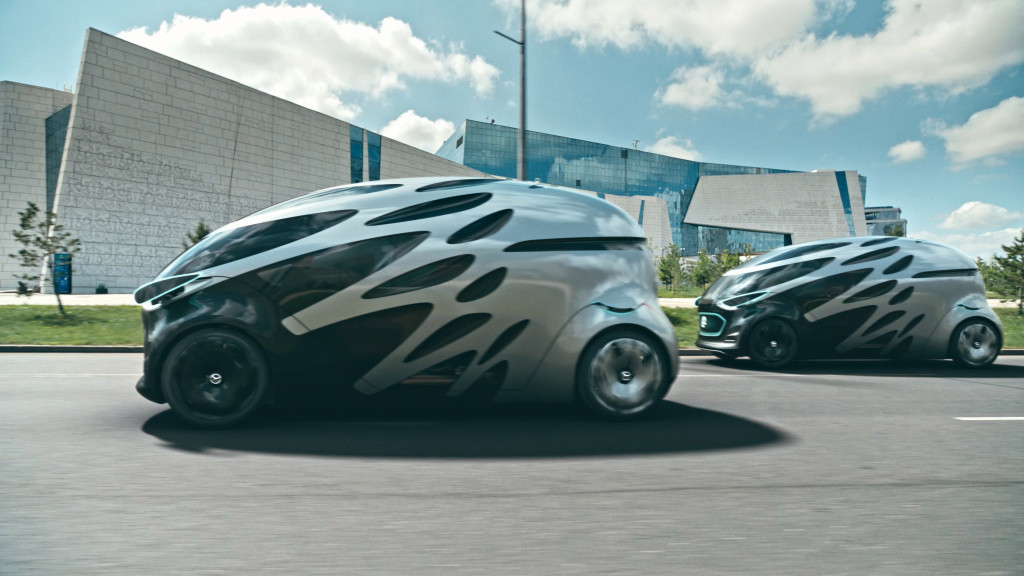 Mercedes-Benz’s vision for autonomy is flexible and fugly

Mercedes-Benz shared on Monday its vision for how people and packages will someday move in dense urban environments. It’s called Vision Urbanetic — an all-electric autonomous concept vehicle that can change from a toaster-looking cargo van to a dung beetle-esque (or it is bike helmet) people mover.

The Vision Urbanetic joins a growing list of fugly autonomous vehicle concepts to debut in the past two years. But that’s not really the point here.

Moving past the hot takes on its looks, the Urbanetic shows where Mercedes and other automakers are headed. This is a concept, not plans for a production vehicle, after all.

Mercedes’s vision of a powertrain platform that can house several different vehicle bodies is not unique. Automakers are increasingly moving toward a universal powertrain platform for some of its production vehicles to improve manufacturing efficiencies and reduce costs.

The difference here is that the vehicle bodies could be changed on the fly by a team of workers back at a mobility hub, as depicted in the video below.

The system is based on an autonomous driving platform onto which the respective bodies (people mover or cargo) are fixed. The underlying platform incorporates all the driving functions, which means the autonomous chassis could make its way to its next job location without a body attached, the company said.

The people-mover body type has space for up to 12 passengers, while the cargo module has a storage volume of 353 cubic feet, can be divided into two levels and transport up to 10 pallets.

The idea presents new logistics and infrastructure challenges that any company with plans to deploy a commercial autonomous vehicle ride-hailing fleet will also face. If this vision were ever to become reality, Mercedes would need hubs located near urban centers, where the Urbanetic vehicles would be housed, maintained and charged. This is also where the body type would be swapped out, depending on needs at that time.

Mercedes seems to have thought through some of this. The vehicle bodies could be swapped out automatically or manually, and take a few minutes, Mercedes said. It also outlined a dynamic communications system that would be able to capture and process data in real time to determine what kinds of vehicles are needed, and where. For instance, it could identify a crowd of people gathered in a certain area or capture local information that a concert would soon be over and then deploy more ride-hailing vehicles to that location.

Mercedes said the vehicles could be used in restricted areas such as a factory site or an airport.