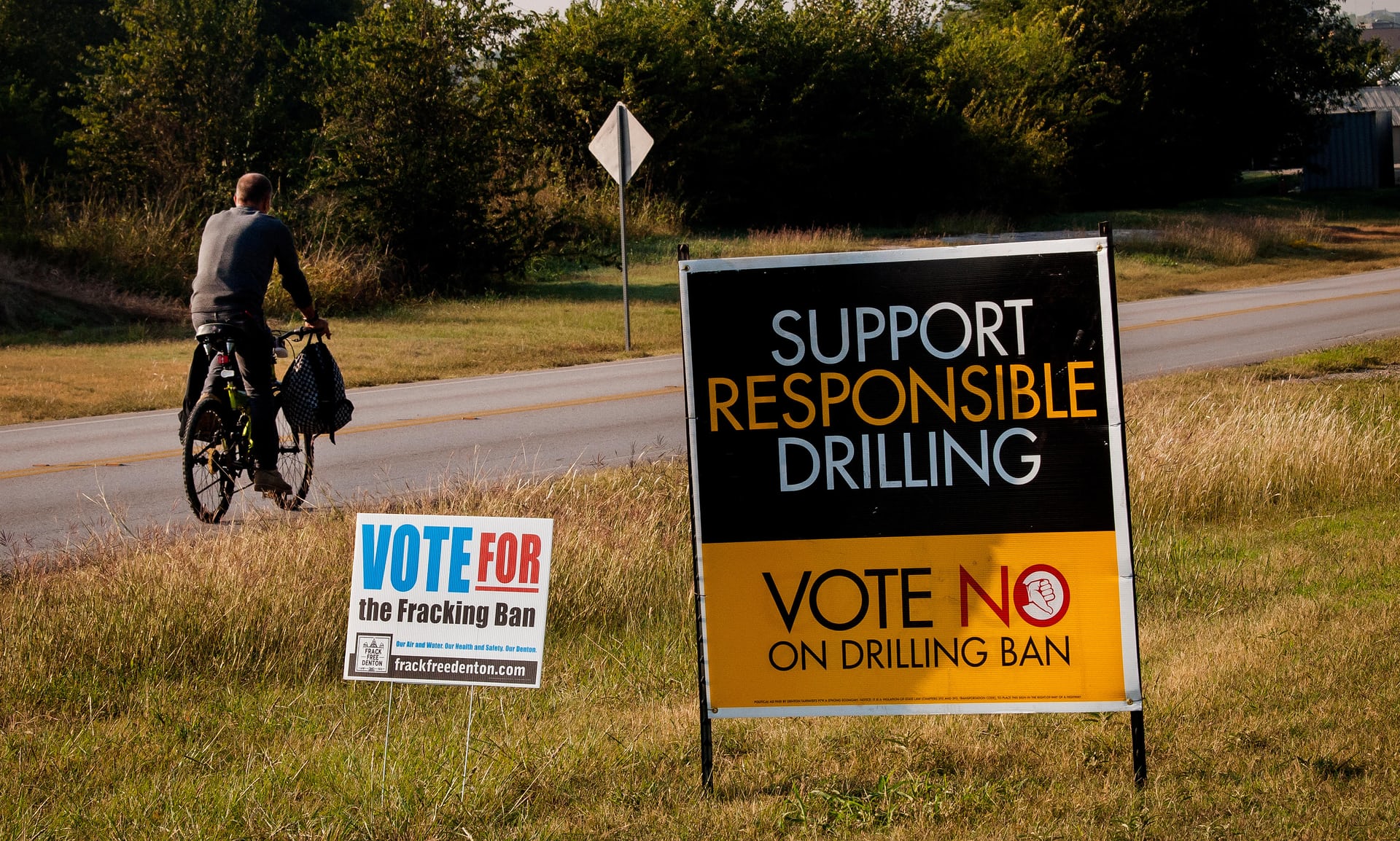 'Like thunder in the ground': Texans fear link between quakes and fracking waste

Wastewater injection, a byproduct of fracking, is the likely culprit behind a surge of earthquakes in northern Texas – and residents want accountability

An earthquake, Cathy Wallace says, feels like “a rumble – it’s like thunder in the ground coming towards your house like a train and you can hear it and feel it coming”.

Wallace is not based in California, or in any of the US’s well-known seismic hot-spots. She lives in north Texas, historically one of the country’s least earthquake-prone regions – until the drillers came.

Rampant energy industry activity is nothing new in Texas, but these days it does not only signify oil pumpjacks nodding lugubriously in remote fields. In little over a decade, since fracking began in earnest in the Barnett Shale, drilling sites have become part of the urban landscape in the nation’s fourth-largest metropolitan area, sometimes placed a matter of metres from houses, businesses, churches, schools, parks and the 11th-busiest passenger airport in the world.

It means jobs and income for residents and municipalities, but environmentalists have long expressed concern at the risk of air and water pollution, leaks and explosions. Now there is a growing body of evidence that oil-and-gas related activity causes earthquakes.

Significant new research led by a seismologist at Southern Methodist University in Dallas and published in November indicates that the spate of tremors in north Texas is occurring on faults that were inactive for at least 300m years. Using a different analytical technique from earlier studies, it backs up previous conclusions that the only plausible explanation for the earthquakes is human activity.

In Fort Worth there are 2,127 pending and approved gas well drilling permits within the limits of the city, which has a population of more than 850,000.

Since 2008, the Fort Worth Basin has changed from experiencing no confirmed recorded earthquakes to hundreds, mostly minor. The likely primary culprit is not hydraulic fracturing (fracking) in itself, but the process of wastewater injection. A common way to get rid of the vast amounts of water that are a byproduct of fracking and other extraction methods is to use disposal wells to push it underground, where it is thought to put pressure on faults.

In the fall an earthquake-tracking website was launched by the Bureau of Economic Geology at the University of Texas.

It shows that in 2017 there were clusters of seismic activity around prominent oil-and-gas producing regions in west and south Texas, as well as the Dallas-Fort Worth area, home to more than 7 million people and a number of huge dams of debatable resilience.

The new study says they haven’t had earthquakes in this area since the dinosaurs were here, so that’s pretty telling

Across Texas, according to the state oil and gas regulator, the oddly named Railroad Commission, there are 33,541 injection wells.

The new tracking website is state-funded, but environmental campaigners accuse Texas’s Republican politicians and the Railroad Commission of refusing to confirm the industry’s role in causing earthquakes and of not holding it fully accountable.

In 2015, after the much-fracked Dallas-area city of Denton prohibited fracking within its limits, Greg Abbott, Texas’s Republican governor, signed a bill that in effect banned the ban by asserting state control of drilling regulations.

In 2016, Ryan Sitton, a senior member of the commission, wrote an opinion piece about drilling and earthquakes published by the Fort Worth Star-Telegram in which, sounding more like an industry advocate than someone tasked with regulating it, he said: “Fear tactics and attention-grabbing headlines don’t serve anyone, and it’s important Texans know that the very same industry putting thousands of people to work, millions of dollars into our schools and roads and money into our economy, is the same one working to keep them and the environment safe.”

A commission spokesperson said that it “has long recognized the possibility of induced seismicity related to fluid injection, and the RRC [Railroad Commission] has in place some of the most stringent rules in the nation to address the issue.”

Critics suggest a decrease in earthquakes in the past couple of years owes more to a reduction in industry activity amid an oil price slump and supply glut than stricter enforcement.

“The new study says they haven’t had earthquakes in this area since the dinosaurs were here, so that’s pretty telling,” said Wallace, sitting in a cafe in Irving, maps of well locations and fault lines spread across the table.

“I think what they’re doing is extremely important and I think it’s the answer to the causation of what’s happening and for our regulators and our elected officials to keep denying it, time’s up.”

The prosperous Dallas suburb, home to ExxonMobil’s corporate headquarters, has gained a reputation as a Texas tremor capital despite its lack of injection wells, with the earth moving seemingly as a consequence of activity in surrounding counties.
“I couldn’t believe that they were doing this in this area with all these people sitting on top of these fault lines,” Wallace said.

‘You have to take a stand’

Ranjana Bhandari recalls being woken up in the middle of the night by an earthquake about five years ago and not realising what had happened until she saw an item in the news.

She founded Liveable Arlington, an environmental advocacy group, in the functional city of 400,000 midway between Fort Worth and Dallas that is perhaps best known for the Dallas Cowboys’ stadium.

About a decade ago “these drill sites started popping up everywhere”, Bhandari said while driving through the city in her electric car.

“Everyone was very excited about it, there was a lot of support,” Bhandari said.

“Half the neighbourhood signed up [to allow drilling on their properties]; the others held out for more money. I just thought it was too risky.”

Today, Arlington is pockmarked with drilling sites. “A lot of people feel like they don’t have the right to complain because they signed up for it but it wasn’t really informed consent,” she said.

Liveable Arlington fought a plan by another Oklahoma company to build a disposal well near Lake Arlington, one of the area’s most scenic attractions and a source of drinking water for more than 400,000 people.

Bhandari corralled 3,000 protest letters and amid rising media and political scrutiny the application was withdrawn in June.

Her group anticipates more battles with an industry feeling emboldened after the election of Donald Trump and the appointment of the fossil fuel-friendly Scott Pruitt as head of the Environmental Protection Agency.

She and her husband moved to Arlington 24 years ago and resolved not to leave despite growing health and safety concerns.

“At some point you just have to take a stand where you are,” she said.