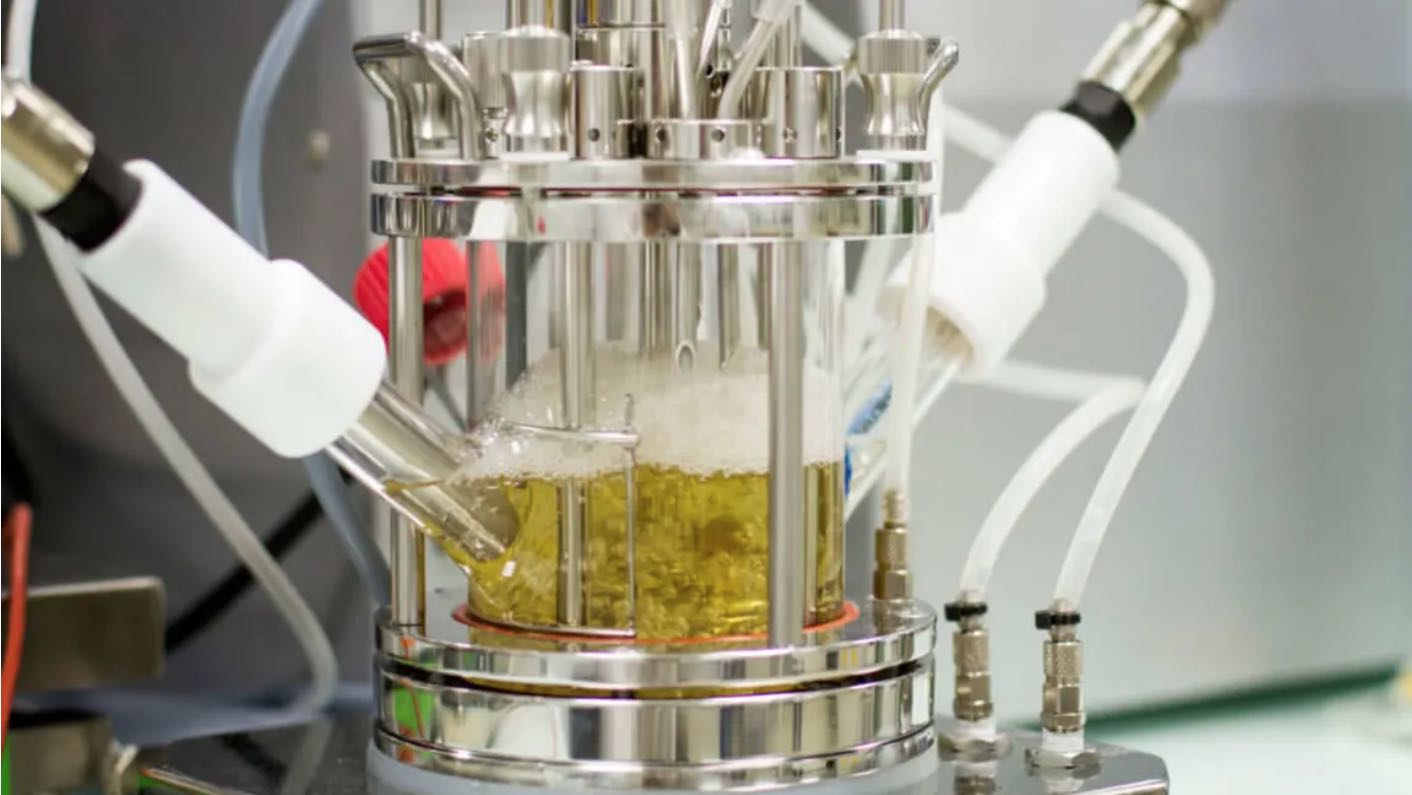 In this “biorecycling” factory, enzymes perfectly break down plastic so it can be used again

The process lets any plastic—say a polyester shirt—be recycled into any other plastic (like a clear water bottle). It could fundamentally change the market for recycling.

Inside a bioreactor in the laboratory of the France-based startup Carbios, pulverized PET plastic waste—the kind of plastic found in drink bottles and polyester clothing—is mixed with water and enzymes, heated up, and churned. In a matter of hours, the enzymes decompose the plastic into the material’s basic building blocks, called monomers, which can then be separated, purified, and used to make new plastic that’s identical to virgin material. Later this year, the company will begin construction on its first demonstration recycling plant.

“Our process can use any kind of PET waste to manufacture any kind of PET object,” says Martin Stephan, the company’s deputy CEO. It’s a process that could happen in an infinite loop: Unlike traditional recycling, which degrades materials each time you do it, this type of “biorecycling” can happen repeatedly without a loss in quality. A new transparent water bottle made this way will look and perform like one made from oil, even if the source was a mixture of old clothing and dirty plastic food trays. “The final product will be the same quality as petrochemical PET,” Stephan says.

The technology can bring new value to colored bottles, which can’t be recycled into transparent plastic because current methods can’t remove the dye. By working with different types of waste, the company believes that it can help increase the volume of plastic that’s recycled. That’s critical for keeping plastic out of the environment, and it’s also key at a time when manufacturers—under pressure from consumers to do more about the growing plastic waste crisis—have new goals to ramp up their use of recycled packaging. Right now, demand is outpacing the supply of those recycled materials.

Nestlé, as one example, plans to use 50% recycled plastic in its packaging in the U.S. by 2025. Earlier this year, Nestlé, along with PepsiCo and Suntory Food and Beverages, joined a consortium with L’Oreal and Carbios to help the recycling technology get to market more quickly. The corporations are supporting the startup with funding and expertise.

“They need more recycled materials . . . and they know that reaching those goals is impossible with the existing technologies,” Stephan says. “It’s not enough. You don’t have enough volume, and you don’t have enough quality. We will bring volumes by recycling material waste, which today is not recycled because they have low or no value.”

Around one million metric tons of PET food containers go on the market in Europe each year, Stephan says, but the recycling rate is close to zero, both because the trays are contaminated with food and because the structure of the plastic means that it can’t easily be recycled into the form used to make plastic bottles. But the new process would make it economically viable for recyclers to work with that waste. There’s still a challenge of getting consumers to recycle in the first place—in the U.S., even an easily recyclable item like a clear plastic water bottle typically ends up in the trash. But if consumers better understand that there’s value in the material, recycling rates might increase. “If the consumer understands that plastic waste is a valuable raw material, we are convinced that their behavior can change,” Stephan says. “But clearly, an educational effort will be needed, as well as investments in collection and sorting infrastructure.”

Carbios developed the technology by starting at a landfill—it put pieces of plastic near the landfill, then studied the biology of the soil in places where the plastic had partially degraded over time. In the soil, some microorganisms were evolving to use enzymes to break down plastic. The natural process was still very slow, with only a tiny percentage of the plastic broken down over a number of days. But teams of scientists worked to optimize the enzyme to work much more quickly. “When there is a source of carbon in the environment like plastic, Darwin’s laws say that microorganisms will evolve to be able to consume the source of carbon,” he says. “The problem is that it will take a few centuries. We don’t have a few centuries to solve the plastic pollution issue. So we have accelerated what nature would do by itself by optimizing those enzymes.”

Several startups are working on a new generation of recycling technology, but Carbios says that there are some advantages to using biology rather than chemical recycling. The process uses lower temperatures than other new tech, saving energy. It doesn’t use solvents. And it can accept a wider range of waste.

Earlier this year, the company demonstrated that it could make a 100% recycled plastic bottle using the new process. Ground will break on the company’s first demonstration plant this year, which is expects to open in 2021. It plans to license the tech to PET producers, which can plug it into their existing plants that make plastic from oil. As Carbios scales up, the team expects that the cost of the technology will compete directly with oil-based plastics. “We are convinced that the process has the potential to be at parity with petrochemicals,” Stephan says. “Of course, we need some time, and we need some experience. The PET industry has hundreds of millions of tons of experience and 40 years. So we need to catch up.”