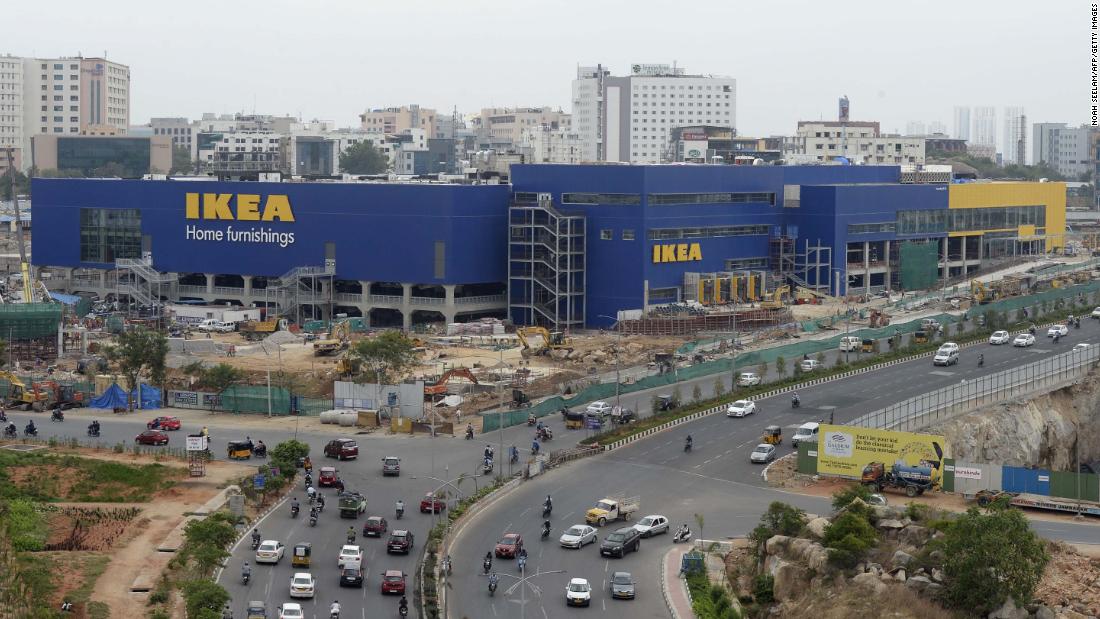 This past August, Ikea opened its first Indian store in the southern city of Hyderabad.

The reaction from consumers was, well, enthusiastic — if your idea of enthusiastic involves stampedes, traffic jams and veggie meatball shortages. On its first day alone, an astonishing 40,000 shoppers descended on the sprawling new outlet where the inventory has been customized to reflect prevailing Indian cultural norms and household budgets without abandoning the low-cost, design-forward philosophy that has propelled Swedish-born Ikea from cult Scandi brand to the world’s largest home furnishings retailer. As of early October, more than 2 million Ikea-curious customers had visited the color-drenched superstore with a Parcheesi board-esque layout where, according to Quartz, top-selling items include mattresses and domestically manufactured plastic spoons. Home deliveries are made by solar-powered rickshaw.

As reported by The New York Times, the much fussed-over multinational company, which operates over 400 stores (some franchised) in more than 50 countries across the globe, plans to open additional outposts in New Delhi, Mumbai and Bangalore within the next two years. By 2025, Ikea hopes to have 25 stores up and running across India. (Other new markets include Latvia and Bahrain with future plans to expand into in Mexico, the Ukraine, the Philippines and elsewhere.)

Wasting no time expanding its footprint in India, Ikea has also been quick to launch a new sustainability campaign that, in this particular case, is wholly India-centric.

From investing in wind energy to doing away with all single-use plastic products to curbing food waste at its in-store cafes, sustainability is deeply ingrained into Ikea’s corporate DNA. Its relentless drive to reduce both its own environmental footprint and that of its customers just keeps getting stronger. The company’s new campaign in India, however, is particularly notable given that it tackles one of the country’s most pressing environmental concerns: air pollution.

Dubbed Better Air Now, the new initiative aims to help lower pollution levels by incorporating rice straw — an agricultural byproduct from rice harvesting operations that’s typically burned by farmers — into a range of new products that will be sold at the Hyderabad store as soon as 2019 or 2020. There are plans to eventually introduce the waste-based furnishings and home accessories — it’s not yet clear what exactly they’ll be — to Ikea markets outside of India.

Ikea is no stranger at integrating planet-friendlier materials into its product range, whether it’s waste glass, bio-plastic or sustainably sourced timber. In fact, the flat-pack pioneer intends to rely exclusively on renewable and recyclable materials by the year 2030. (Per Reuters, 60 percent of the Ikea range is currently made from renewable materials while 10 percent contains recycled content.)

Better Air Now is unique in that it appears to be the first Ikea sustainability initiative that harnesses an abundant — and hugely problematic — indigenous waste material in an innovative new way while also directly benefiting the specific market that said waste material is sourced from.

As detailed in a press release, Ikea plans to work with a wide range of partners on accomplishing the ultimate goal of Better Air Now, which is to completely stamp out the practice of burning rice straw. They are including state governments, NGOs, private companies, universities and the farmers themselves, who will be paid for the raw materials.

Ikea will first focus on collecting rice straw from farming operations in and around northern Indian cities such as New Delhi, Gurgaon and Faridabad, which experience some of the highest levels of air pollution in the world. While the burning of rice straw, also known as paddy stubble, isn’t the sole reason these cities struggle with abysmal air quality, it’s considered to be a major contributor — one that Ikea is confident that it can snuff out.

The long-term aim, Ikea says, is to “expand the initiative to other areas of the country and to create a model for how to reduce air pollution in other mega cities of the world.”

Northern India is home to nine of the 10 most polluted cities in the world according to the World Health Organization. CNN notes that roughly 33 percent of air pollution in New Delhi earlier this month resulted from the burning of crops in nearby rural areas. (Despite being terrible for the environment and human health, farmers continue to burn paddy stubble as it’s the easiest and cheapest way to clear a field for sowing.)

“The health effects of air pollution are severe and at IKEA we are determined to contribute to a solution,” says Helene Davidsson, sustainability manager for South Asia with IKEA Purchasing. “We know that burning of rice crop residue is a major pollution source and with this initiative we hope that will change. If we can find a way to make use of rice straw it would become a valuable source for the farmers instead of being burnt, which in the end also would contribute to better air for people.”

While this is the first major sustainability initiative launched in India by Ikea since the retailer first landed in Hyderabad, the company has long supported female Indian artisans through its lovely, limited Innehållsrik collection, which includes hand-woven baskets, hand-dyed textiles and more. While available in the U.S. and other markets, it’s unclear if the Innehållsrik range — made possible by Ikea’s Social Entrepreneurs program — is also available in the Hyderabad store.

In addition to combating air pollution in Indian cities, Ikea also recently announced it is joining HP, Dell, Herman Miller, General Motors, Interface and others in the NextWave campaign to limit the amount of plastic entering the world’s oceans.