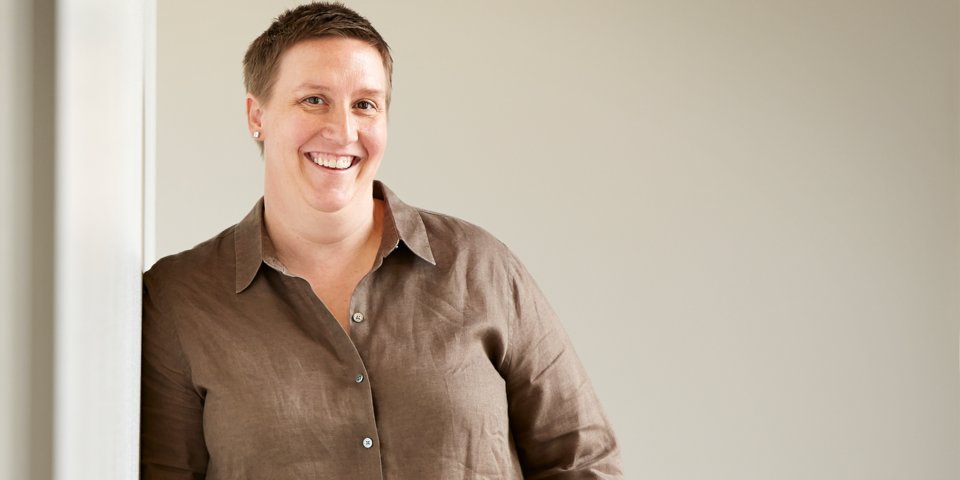 Nichole Mustard isn’t your classic Silicon Valley tech founder. She didn’t teach herself to code as a kid. She didn’t attend Stanford. She didn’t intern at a tech giant.

After college, she was a trainee manager at Pizza Hut, living hand to mouth in a cheap Los Angeles apartment with a roommate, she told Business Insider.

Today, she is one of the three founders who built Credit Karma, a consumer credit-score company, into a startup worth $4 billion, according to the deal-tracking site PitchBook.

Her career offers a valuable lesson: Focus on being happy, and it will get you through what life throws at you — even when the startup you risked everything to build almost falls apart on you.

Looking for her happy place

Mustard grew up in the tiny, rural town of Coldwater, Ohio, and put herself through college at Miami University to get a degree in zoology. She wanted to be a scientist, until she discovered that it meant mostly hanging out with mice.

“I love people,” she said with a laugh. “Me being in the lab with a bunch of mice was not a great future.”

After ditching her chosen profession, she found herself with no direction.

So she made a promise to herself to always be happy. One problem: She didn’t know what kind of lifestyle would get her there.

So she spent her weekends traveling across the United States, going from coast to coast in search of her happy place.

That’s how she settled on sunny Los Angeles. She just up and moved there, with no job or place to live, knowing no one. She got an apartment with a friend of a friend and took the first job she landed: a trainee manager at a Pizza Hut. With her paychecks, she slowly bought herself a few essentials: lawn chairs for the living room, a mattress.

She was happy with her choice to live in California, but she didn’t see a future at Pizza Hut.

“I kept thinking: What makes me happy?” she said.

Mustard decided that she loved investing and helping people, so she studied to become a certified financial planner and soon built up a thriving practice.

That’s when she fell in love and turned her life upside down again. Her then-girlfriend was about to take a job in Boston, so Mustard changed tack again. She sold her business, and the couple moved to Boston and were soon married.

It was there that Mustard landed the job that would ultimately change her life. She became the sales director at a hot tech startup called Compete.com, a now-defunct site similar to comScore that measured web traffic.

Through her role developing partnerships, she met her Credit Karma cofounder Kenneth Lin, who had been working at a company called E-Loan. He had an idea for a business: making consumer credit scores easier for people to see and monitor. And he thought Mustard would be a great cofounder, with her background in financial planning, strong work ethic, business connections, and cheerful attitude.

They were joined by another cofounder, a technical wiz named Ryan Graciano, and were off.

Mustard sold her house, took a 60% pay cut to work at her startup, and persuaded her wife to relocate to San Francisco with their young kids.

To save money, Credit Karma opened its original office in “a fourth-floor walk-up above a bar over an overpass in San Francisco,” Mustard said.

“You can imagine how delightfully smelly that was,” she added.

Thanks to their previous connections in the finance industry, the founders got TransUnion to agree to give them free access to the credit-score data they needed. Then, a journalist at American Banker got wind and wrote about their plans. The article went viral on Reddit and other sites.

“Our waitlist went from 10 people a day to 10 people every minute,” Mustard recalled.

It was five days of joy, she says, with the founders telling one another: “We’ve got something here. People want to experience this.”

But then FedEx delivered a letter from TransUnion saying it was backing out of the deal. Without free access to those credit scores, Credit Karma would be sunk before it even really began.

“It was terrifying. It was incredibly hard. I was sick to my stomach for days,” Mustard said. “This was March 2008. I moved my family in December. My wife quit her job and had to find another one. And it’s falling apart? Are you kidding me? Still, to this day, I won’t open a FedEx.”

TransUnion had given them 30 days. It took them 29 to pull every string and land a meeting with TransUnion President John Danaher to sweet-talk him into sticking with the project. He was on board — the termination notice had come from a different part of the company — and the issue got resolved.

The founders bootstrapped for a couple of years and had about 300,000 people using the service by 2009. It was time to raise some much-needed investment capital. So, feeling confident, the team headed to Sand Hill Road, the stretch of Silicon Valley that houses many of the most prestigious venture investors — only to find that no one would fund it.

“It was like hitting a brick wall,” Mustard said. Investors didn’t understand the service, the business model, or the financial-services industry.

It was a time when Amazon was coming into dominance and daily-deal sites like Groupon were hot. Investors expected Credit Karma to play into this quick-turnaround commerce market, Mustard said, and kept asking questions like “How do you do same-day offers?”

“But financial services aren’t like a Kmart blue-light special,” she said.

The team was stumped. “We came to the realization that they weren’t our people,” Mustard said of the Silicon Valley venture capitalists.

They changed tactics and coasts. Instead, they pitched to QED Investors, the Virginia-based fund started by Nigel Morris, a cofounder of Capital One. And when they explained their credit-monitoring service to that team, “it was like lights going on,” she said.

They raised a couple million dollars from QED and other seed investors, landed in the fintech accelerator Finovate, and were truly off.

Flash forward to 2018: Credit Karma has since raised over $370 million from investors, has 80 million users, and employs 800 people at much nicer digs on San Francisco’s Market Street. The claim-to-fame perk is the mani-pedi at the company’s in-office nail salon.

And Mustard says she couldn’t be happier.

“I feel like once you get used to taking those risks, like getting a one-way ticket to LA, you know what it means to rebuild your lifestyle. You see these things you want to be part of. In this case, there were people I wanted to be with,” she said of her cofounders. “To do this in a way that’s really actually helping consumers and not just making money, that feels great.”