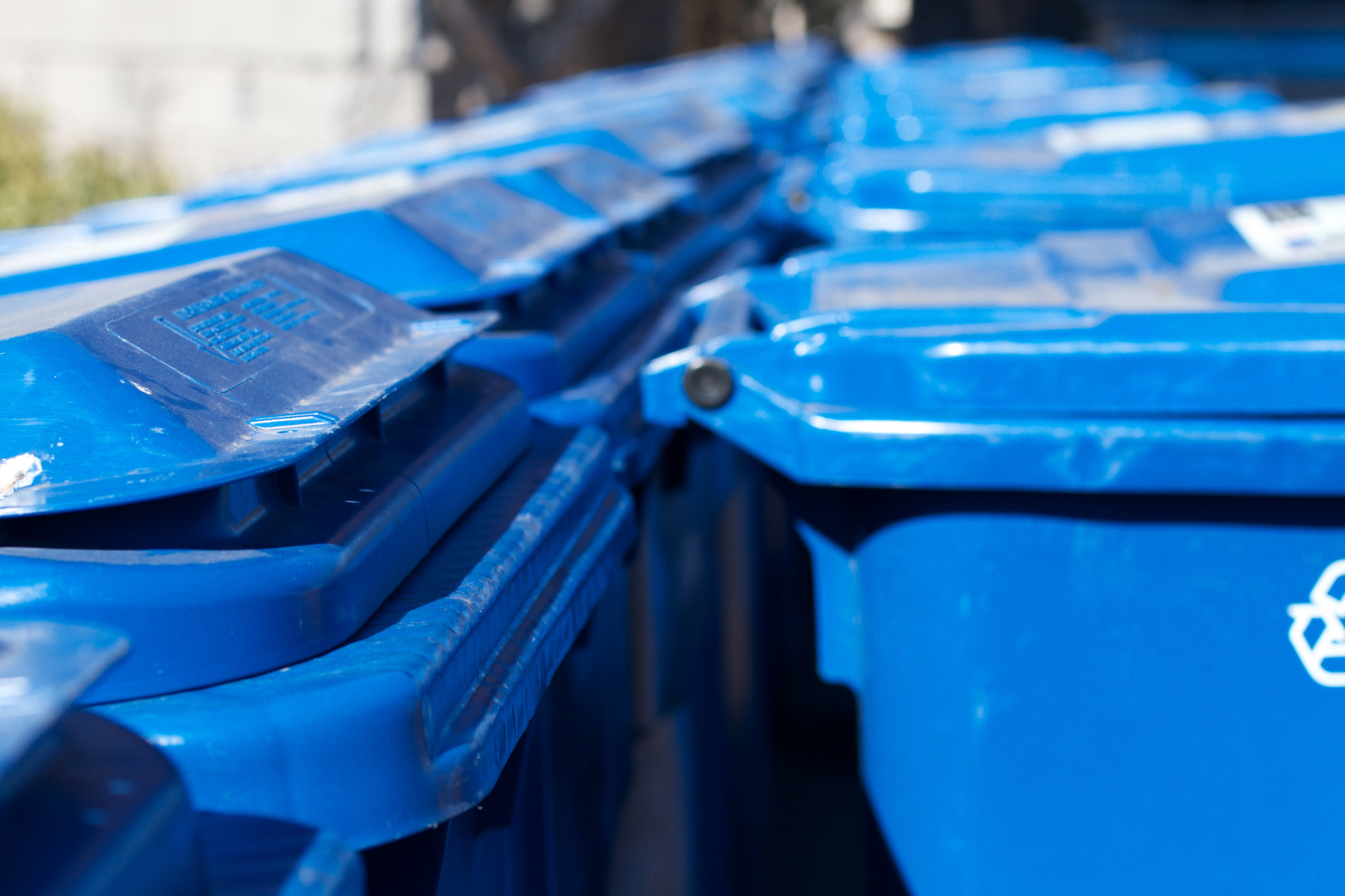 How small US cities are fighting to save recycling

Solutions to preserve access and reduce contamination are emerging from municipalities, partners and citizen-led efforts in states such as Oregon, Virginia and New Hampshire.

Hardships caused by China’s global recycling industry disruptions have been particularly acute in small U.S. cities and towns over the past year. But in the face of adversity, a number of them have devised solutions to keep recycling programs alive — at least to some degree.

While cities crunch the numbers and try to find economically feasible ways of retaining a recycling program — reverting to a depot drop-off system in lieu of curbside collection, for instance — citizens are also stepping up. From organizing parking lot glass recycling events to biking around town picking up material, local businesses and citizens are finding their own ways to contribute.

“This is the secret to success, looking at it from a grassroots, community-based level,” said Laura Leebrick, community and governmental affairs manager for Oregon-based Rogue Disposal & Recycling.

The large and small of it

While the entire North American recycling industry has felt some effects of China’s scrap import bans and restrictions, municipal pain has, for the most part, been realized in the form of increased collecting and processing service fees. Smaller cities, however, are feeling the brunt of the blow — their curbside collection programs have derailed, and some have folded altogether.

Thus far, most large cities have been able to protect their residents from the worst of the China-related fallout. But small cities, especially rural ones, have less margin, as recently highlighted by the Pew Charitable Trusts. They may feel pressure to simply end curbside collection rather than wait the weeks or months necessary to ride out the storm – especially because that storm may not pass.

Small municipalities now have to decide what to do “given the reality of China and that it’s not changing,” said Mike Durfor, executive director of the Northeast Resource Recovery Association (NRRA). “People have figured out this is a long-term deal.”

“Everyone is being impacted — it’s just taking a longer time to affect larger cities…. It’s a trickle-down effect,” explained Harsit Patel, business services manager for Harrisonburg, VA’s Department of Public Works. Harrisonburg lost curbside recycling in February 2018 when its contractor, van der Linde Recycling, pulled out due to unfavorable market conditions. The contractor had “hoped for things to turn around, but they never did,” said Patel, adding that Harrisonburg “didn’t have a choice” but to end curbside collection.

The changes affect small cities more “because of our limited budgets,” said Brian Steadman, public works superintendent in Milton-Freewater, OR. The city was among the first to end curbside recycling early last year when it lost a contractor as a result of market conditions.

Milton-Freewater managed to re-launch a recycling program in the form of a material drop-off depot with an attendant. That option allowed the city to keep the same rates for customers, rather than incur a massive expense or operate at a loss and hike rates to find a viable curbside collection solution.

“Curbside is so costly with just the physical handling of it.… But most of our citizens are very pleased with what we’re offering right now, and it’s working well,” Steadman said.

In some cases, the issue doesn’t necessarily lie with a municipality’s size, but rather “its geographical location and also politics,” said Kristan Mitchell, executive director of the Oregon Refuse & Recycling Association. “I think it depends on the geographical location: How far away are you from a market? And how much is your community willing to pay?”

Medford, OR was also among the first cities to end traditional single-stream curbside recycling. Medford and neighboring cities are “quite distant from the Portland metro region, which is where recycling processors, the MRFs, are located in the state of Oregon,” said Rogue’s Leebrick.

The distance to processors and the low volumes of material generated “really put us in a pinch when China first started making its intentions known,” she said. “We knew we were in for a rough ride, but we didn’t know how rough it was going to be.”

Root of the problem

Although many are quick to blame China for cutting off a viable marketplace in which U.S. recyclers could sell their materials, industry experts indicate a significant portion of the problem rests directly inside domestic curbside collection bins: single-stream contamination.

Harrisonburg operated its own curbside program prior to contracting with van der Linde, and Patel noted that at the time, there was “a lot of contamination.” Current markets tolerate less contamination than in the past, and prices rely heavily on material being clean. Therefore, when Harrisonburg lost its curbside service and launched a drop-off program, leaders decided to focus on recycling quality “before we entertain any new options,” said Patel.

Milton-Freewater leaders find that the small expense of having a full-time worker assist residents with putting the correct materials in the bins pays off in contamination reduction. “We’re getting very, very minimal contamination because any time our depots are open, they’re manned,” Steadman said.

“Our prior contractor would collect anything in a recycling tote and throw it in the back of their rig, which implanted in our citizens’ minds that we took plastic,” said Krista Gannon, Milton-Freewater public works assistant/project aide. The state of Oregon mandates that all municipalities with a population over 4,000 provide some type of recycling program and requires that certain materials (not including plastic) are recycled.

“The last year that our contractor was collecting it, they were actually throwing it away,” Gannon said.

Rogue also expanded its manned depot drop-off program for segregated materials such as glass and mixed paper. Those two materials are what many recyclers nationwide consider the heart of the contamination problem right now.

“Glass shouldn’t be in single-stream recycling. It’s a great recyclable material … but the only way to do it is separately,” Durfor said. “It’s the same thing with mixed paper. That’s a huge problem for recycling because probably 40% of single-stream is mixed paper, by weight.”

“Why have costs to recycle continued to climb over the last three years? It’s because of contamination. China answered that question once and for all,” Leebrick said. “This is how we can ride it out in a more responsible way while we figure out how to develop domestic processing and mills for a wider range of fibers and plastics.”

Harrisonburg’s recyclables drop-off program began with one collection point and has since expanded to include a mobile collection event at the weekly downtown farmers market. Keeping some sort of recycling program, as it turns out, wasn’t just a priority for municipal leaders; community members also started stepping up with grassroots efforts to help others recycle under the less convenient conditions.

A few groups take recyclables to a depot for neighbors who are unwilling or unable to make the trip. Harrisonburg resident Art Fovargue, who launched a neighborhood network to take residents’ recyclables to the drop-off center, posts notices on social media asking neighbors to bring their recyclables to his home before he goes.

“I hate to see a lot of people driving there individually and wasting the gas to take their one or two bins of recycling … I’m just a concerned citizen,” Fovargue said. “I feel it’s important to make our contribution, and of course it saves landfill space.”

“Their concept is neat because they’re [getting around by] using bicycles. It’s completely zero emissions — the least carbon footprint possible. We [at the city] don’t have a way of doing that,” he said.

Residents are also finding ways to adjust to the loss of their curbside program in Milton-Freewater. “The first few weeks or months, we got a lot of complaints. But now … the people who want to recycle are just happy they have a place to go,” said Steadman. Similar to Harrisonburg’s informal community collection networks, “I do think there are probably some neighbors helping each other out like that,” he said.

“Yes, that’s whats happening here, too… A lot of people are doing that,” Leebrick affirmed of Medford and neighboring communities.

Local businesses are also helping community-wide recycling efforts stay alive, with grocery stores in Medford sponsoring glass recycling drop-off events in their parking lots. “That may not work in urban areas, but in rural areas, everyone goes to the grocery store,” Leebrick said.

Keeping up the momentum

Leaders in each city must do what’s best for their own community, Patel said. “If you cut [recycling programs] off completely, it’s always difficult to re-educate your citizens and to go back to some type of recycling program.”

Rogue Waste Systems recognized that difficulty and opted to continue collecting. At the same time, it worked with the state Department of Environmental Quality to landfill the recovered materials for a time, which “we did not like at all as a long-term option,” Leebrick said. “But we, at that time, wanted to make sure people didn’t completely lose faith in curbside recycling and disconnect from it entirely, so we opted to keep collecting.”

“If you can figure out a way to limit your costs now by having a program within your budget means, at least do something to keep it in your citizens’ minds,” Patel said. When markets stabilize and “you have the ability to go back to curbside or a little more robust program … it’s not a huge learning curve to ramp it up again.”

“For the small towns, if they have a source-separated system in place — where the residents do the labor to separate it — it’s not perfect, but it’s a lot better,” NRRA’s Durfor observed.

For example, Rogue’s scaled-back commingled collection system, which emphasizes contamination removal, is viewed as a success, considering processors “have been accepting 100% of our material,” Leebrick said.

Durfor recommends that small cities anticipate their needs as far as 25 years down the road and invest in appropriate infrastructure now.

“Does it take time to put it in? Sure. Does it cost manpower? Sure. Is it better than throwing [material] away? Absolutely!” said Durfor. “If they can bale [separated materials] and ship them out in full loads, they’ll be fine.”