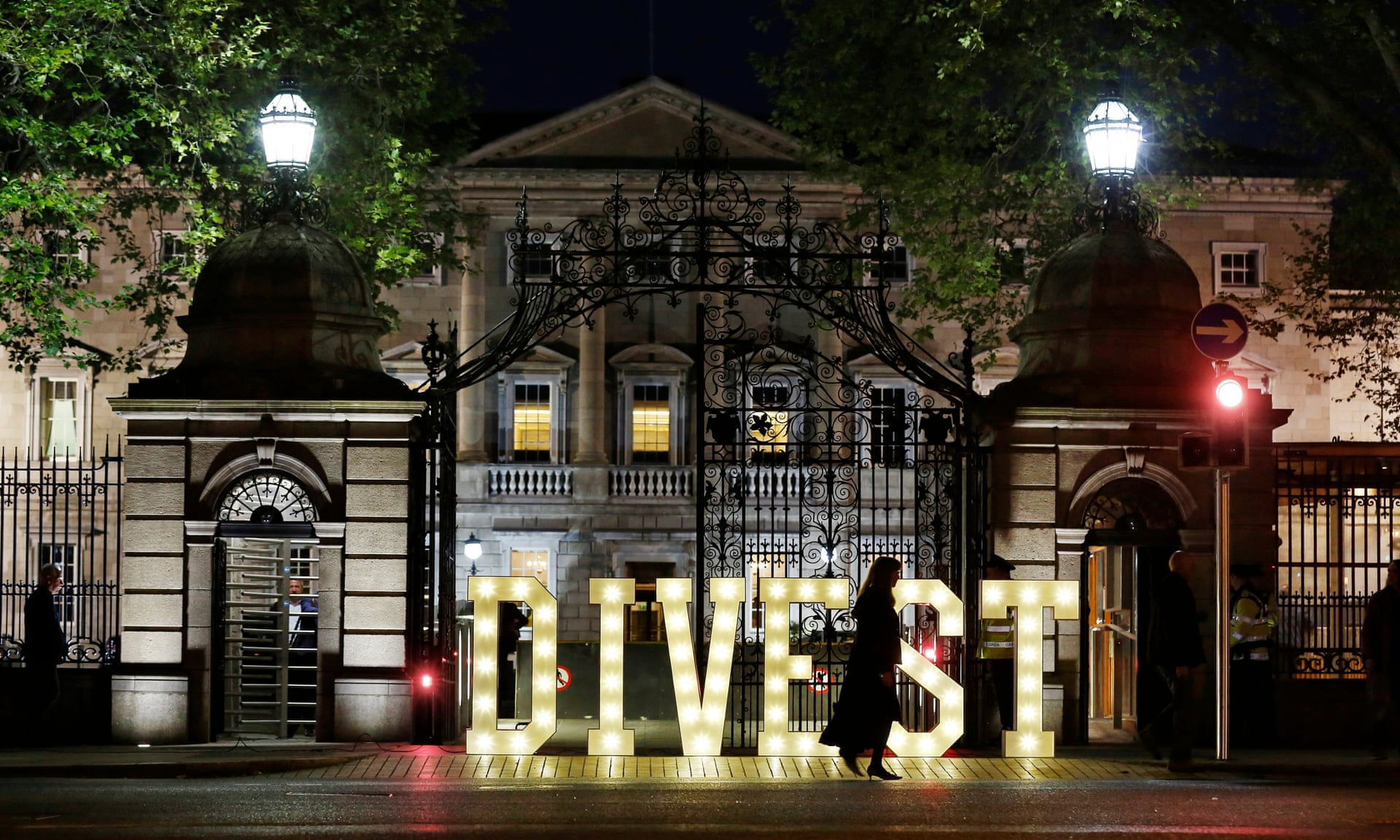 Insurance companies lead the sell-off of coal, oil and gas stocks over climate change and financial fears – oil majors now cite divestment as a risk to them

The funds committed to fossil fuel divestment now total more than $6tn (£4.6tn), with almost 1,000 institutional investors having made the pledge, according to a new report.

The sell-off of coal, oil and gas investments is led by the insurance industry, with $3tn of funds. But it also now includes the first nation to divest, Ireland, major cities including New York and key medical organisations. Major oil companies such as Shell have this year cited divestment as a material risk to its business.

Fossil fuel divestment began on US university campuses in 2011 but now spans 37 nations around the world. Supporters of divestment say existing fossil fuel resources are already far greater than can be burned without causing catastrophic climate change and that exploring for and producing more fossil fuels is therefore morally wrong. They also say fossil fuel companies are risky investments as global action on emissions gets tougher.

Some investors argue that remaining as shareholders and persuading fossil fuel companies to change can be more effective. However, another new report finds this approach has not delivered any significant change to date.

The new divestment report, by Arabella Advisors, calculates that investors with $6.2tn in assets under management have committed to divest from fossil fuels, up from $5.2tn in the previous report in 2016.

Bill de Blasio, mayor of New York City, and Sadiq Khan, mayor of London, which is in the process of divesting, said in a joint article for the Guardian: “We must use our economic might to accelerate the transition to a low-carbon economy. Taking this kind of action now could help us make a crucial difference to the people we represent and the future of our planet.

Jeremy Grantham, co-founder of GMO, one of the world’s most influential asset management companies, said the financial case for divestment was compelling. “Investors with long-term horizons should avoid oil stocks on investment grounds. They face a sustained headwind. Ethical arguments for divestments are simply not necessary. They are a pure bonus,” he said.

Another new report, from Genus Capital Management in Canada, said its fossil free fund had outperformed a benchmark of standard stock market indices by almost 2% per year over the last five years. The company’s Fossil Free CanGlobe Equity Fund is a mix of Canadian and global stocks. “At the five-year mark, we can conclusively say: divesting from fossil fuels pays,” said CEO Wayne Wachell.

The Arabella Advisors report noted that the American Medical Association (AMA) and the UK’s Royal College of General Practitioners had both divested. “It is unwise to own fossil fuels companies long-term and the products of these companies are harmful to human health by producing dangerous air pollution and contributing to global climate change,” said Dr Todd Sack at the AMA.

Divestment appears to be concerning oil and gas majors. In Shell’s last annual report it states: “It could have a material adverse effect on the price of our securities and our ability to access equity capital markets.” Furthermore, the World Bank Group has committed to stopping funding oil and gas development and major insurers including Swiss Re have decided to stop underwriting coal projects.

The report on investor engagement on with fossil fuel companies, from shareholder advocacy group As You Sow, found that 160 climate change shareholder resolutions were filed at 24 US oil and gas companies between 2012 and 2018.

However, none of the companies have adopted plans or targets to cut greenhouse gas emissions from burning fossil fuels and most are investing to maintain or expand production. “The oil and gas sector has not stepped up to address the growing risks to their companies, the broader economy, and our planet,” said Andrew Behar, As You Sow CEO.

The call for ethical investment was backed by Pope Francis in June 2018, when he addressed the heads of oil companies. He said “disturbing and a cause for real concern” that carbon emissions were still rising and added: “Even more worrying is the continued search for new fossil fuel reserves, whereas the Paris agreement clearly urged keeping most fossil fuels underground.”

Ellen Dorsey, at the philanthropic Wallace Global Fund, said the pressure to divest would continue. “Today, our movement pledges to increase divested global assets to $10tn by 2020.”

She said investing in clean energy was as important as pulling funds from polluting firms: “Investors should also commit at least 5% of their portfolio to climate solutions to help rapidly scale to 100% renewable energy and universal energy access.”

Robinson backed the clean investment call: “This is what climate justice requires.”